Absent councillor: Should there have been a council by-election in Stonebridge?

The following has been posted on Facebook by Frank Downes. It appears to refer to Cllr Sabina Khan who some sources claim has not been resident in Brent for more than a year. Stonebridge is one of the most economically and socially deprived wards in London and needs and deserves committed and energetic representation from its councillors. It has already seen the closure of Stonebridge Adventure Playground and currently residents are campaigning against the unpopular redevelopment of Bridge Park.


As Secretary of Stonebridge Labour Party, I was faced with a very difficult time, not helped by any faction of the party that I have been a paid member of, and supported for over 30 years.

At the last local elections a female candidate was foisted upon us. Arguments against this imposition were ignored. The rules were quite clear and accepted, we had to have a female candidate, our argument was, yes but just not this one. The lady in question was duly elected, and for the first 12 months or so had very little interaction with the community.

Presuming that she would do the right thing and resign so that a by-election could be filled to replace her I left thing ride until the next scheduled meeting. When asked Cllr Muhammed Butt informed me personally that she refuses to resign and will have to wait until 2018 to replace her as there was nothing he or the party could do. Oddly enough she has continued to collect her expenses for the last 2 years. Question: if she is not carrying out her duties, what expenses is she incurring?

This is an extract from Khan's attendance record which shows that she was absent for 67% of the meetings that she should have attended. However her November 6th attendances mean that she has escaped disqualification. 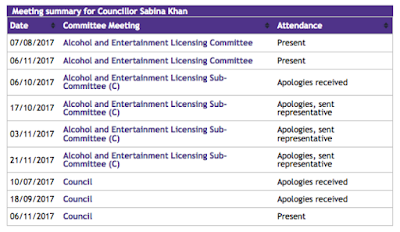 Cllr Khan's  business interests are registered as KS Enterprises E1 2LH and Romna Gate Restaurant in Southgare. Her 'land interest' which is usually the family home, is also in Southgate,

I understand that another councillor in neighbouring Harlesden has moved to Luton but is still active in the Harlesden community and has an 83% attendance record for meetings he was expected to attend.