Click on the title for an entertaining video statement on Climate Camp policing ahead of the new camp in the London area later this week.
Posted by Martin Francis at 16:22:00 No comments:

SAVE OUR TOWN HALL - SAVE OUR LOCAL DEMOCRACY 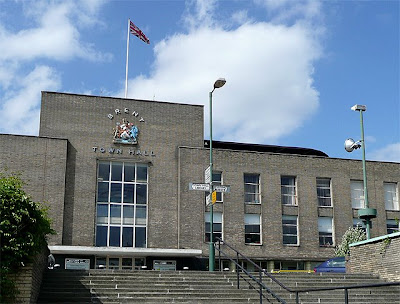 © Copyright Roger Kidd and licensed for reuse under this Creative Commons Licence
The local newspapers have this week carried reports of the dispute between Shahrar Ali, a local resident and member of the Green Party and Cllr Kanta Mistry who chairs the Kingsbury Area Consultative Forum. The immediate controversy is about the minutes of the Forum which Shahrar Ali claims were initially inaccurate and reworded by verbal agreement at a Forum meeting, and then reworded again prior to publication.
The effect of the rewording was to remove the rather stark claim by a council official that Brent Council had not consulted on the proposed civic centre which will replace the Town Hall and other major council buildings, 'because it did not need to' and substitute with 'The council had not consulted residents on whether a new civic centre needed to be built and had not done so because the business case for a new building was felt to be overwhelming'.

Underlying the dispute are wider issues about consultation:

* Should the council have the power to decide not to consult on major projects that impact on the people of Brent?

* Are the minutes of consultative forums the property of the meetings themselves or of the council members and officers?

*What happens when participants in the consultation process seek to extend democracy and accountability and the council seek to limit it?