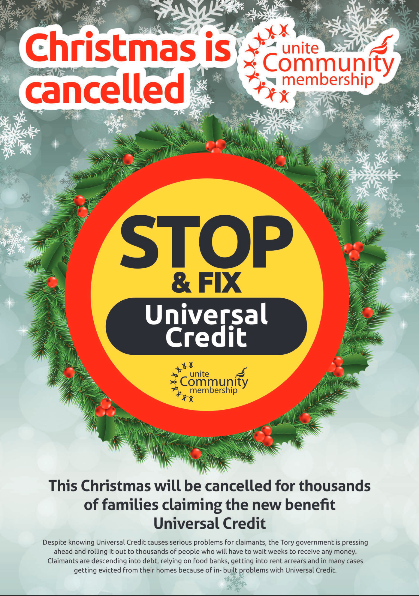 This year Christmas will be cancelled for thousands of families claiming the government’s new all-in-one benefit, Universal Credit.

Unite is calling on the government to stop and fix Universal Credit before even more families will be forced to use food banks and struggle to heat their homes this Christmas.

The government has also admitted that the Universal Credit helpline for claimants will be closed for the majority of the Christmas period, making life even more difficult for claimants needing advice and emergency help.

Unite Community members and campaigners will be holding street stalls in 70 towns and city centres across the UK on Saturday 2 December to help raise awareness of who will be affected by Universal Credit.The Brent event, with Kilburn Unemployed Workers Group,  will be at Noon until 2pm on Saturday at Neasden Parade, Neasden Shopping Centre. Other demonstrations listed HERE

As well as the long waits for the benefit there are other problems with Universal Credit such as the complex online-only application process and the housing benefit element not being paid direct to landlords causing rent arrears and in some cases eviction.


Despite knowing that Universal Credit causes serious problems for those claiming it the government is ploughing ahead regardless while claimants are descending into debt, relying on food banks and getting into rent arrears and in many cases are being evicted from their homes.

In order to claim Universal Credit claimants need an internet connection which many simply can’t afford.

Unite is demanding a cut in the long waits to receive money, for people to be able to apply in job centres not just online, better help for people when the system fails, landlords to be paid directly to avoid people getting into rent arrears and losing their homes, and an end to benefit sanctions for people in and out of work.

In Britain there are currently 505,549 households receiving Universal Credit but a further 1,513,970 will be put on this winter and this figure is expected to reach 5,915,290 once the government has finished rolling it out fully by March 2022.

Over 1.2 million low paid part-time workers will also be affected by Universal Credit and for the first time ever people in work could face being sanctioned (having their benefits stopped) if they don’t prove to the job centre that they’re searching for better paid work or more hours.

The Trussell Trust, the UK’s biggest foodbank, says demand in areas where Universal Credit has already been rolled out has increased by an average of 30 per cent and landlords report a huge increase in rent arrears.

Community members will be handing out leaflets with information and getting people to sign a petition to call on the government to stop the roll out of Universal Credit and fix the problems with it.


The removal of the concrete in the sewer is more complicated than first thought, and we’ve had to extend our finish date to allow us to remove it entirely. We’re still investigating the cause of the blockage and who poured it down there, and we’ll be taking further action once we know who it is.

The spokesman confirmed that Thames have extended their permit for the sewer works on the High Road until December 22nd.
Posted by Martin Francis at 16:01:00 8 comments:

Sir Richard Sykes, Chairman of Imperial College Healthcare Trust, shocked those attending the Imperial Board meeting yesterday when he announced that CEO, Ian Dalton, was leaving his post after less than 5 months in the job. Imperial, which runs west London hospitals, will now have to begin the long and costly process of finding yet another CEO.

Ian Dalton has now moved to NHS Improvement as their new CEO. NHSI is the body that, only last month, knocked back capital investment plans to reconfigure health delivery in outer NW London on the grounds that there was not sufficient evidence that these plans would work. This was the initial bid for capital funds to develop services which, local health bosses claim, would enable the safe closure of Ealing Hospital.

Dalton’s resignation followed almost immediately the well-attended and highly successful open event organised by Imperial management at Charing Cross Hospital. At that event Dalton outlined the excellent work being carried out at the hospital and gave an assurance that Charing Cross could not be closed in the foreseeable future without damaging public health. However, long-term closure plans have not been withdrawn by the CCGs in NW London: what we have is a ‘pause’, not a guarantee of the long-term future of Charing Cross as a major acute hospital.

The resignation occurs at a time of particular turbulence in upper management levels of the NW London NHS. Several key managers have left in recent months and other posts remain unfilled. Managers are caught between a government demand to cut costs even further and, among health professionals, a recognition of the growing need for better funded health services for a fast expanding population.

Merril Hammer, Chair of SOH, said she was stunned by the sudden departure of Ian Dalton. At the Imperial AGM held at St Pauls Church Hammersmith in September, he had outlined ambitious plans for engaging with the local health community.

I am, of course, pleased that Imperial has now declared a ‘pause’ on the closure but given the unprecedented pressure on the facilities at Charing Cross and the highly skilled committed staff there, health bosses need to stop long-term closure plans and not just ‘pause’ them.