Is this worth £17.8m of our CIL money? Proposals for Olympic Way.

The Agenda of the next Planning Committee LINK contains plans for the space next to the Brent Civic Centre/Wembley Library. Readers will recall that modification of the original outline permission for this site was what Brent Council hoped to gain from their decision to use £17.8m CIL money, contributed by Quintain, to replace the Pedway to Wembley Stadium with steps, along with other improvements to Olympic Way.

The planning application for the Pedway is separate, and commitee members are told that  this decision can be made independently of that application. However, the area included in the application overlaps the Pedway (NW04) below, so depends on its removal. If the Pedway is not removed some parts of the propsoed building on the plot will not go ahead. 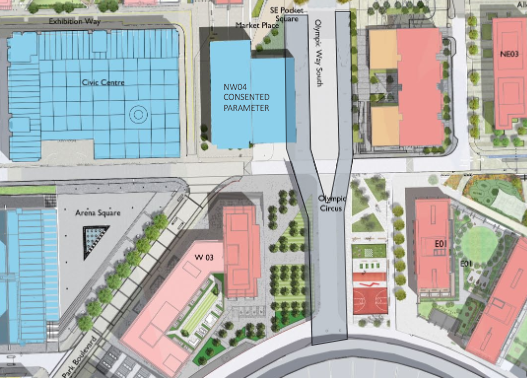 A further condition is changes in the height and length of the new building adjacent to the space. The height is raised from 88.5m to 100m and the length is shortened from 57m tp 41m as seen from Olympic Way. The gaps between the new building and the one to its north will be reduced from 21m to 12m.

The plan includes a canopy/colonade along Olympic Way and a single storey pavilion building. The report mentions a potential bridge to the Civic Centre but does not provide any detail. 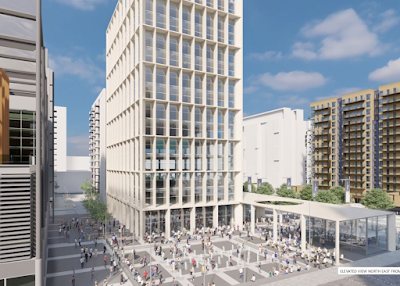 The design brochure is posted below: (Click bottom right for full size)

Alison Hopkins rages against the machines - both mechanical and political! 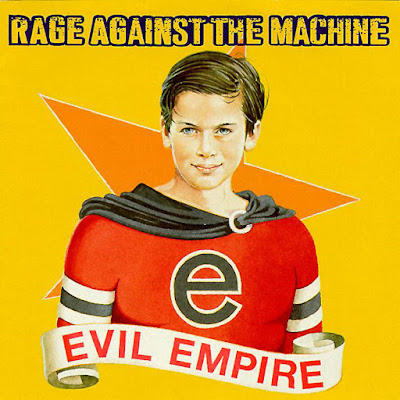 Former Liberal Democrat councillor and Dollis Hill resident Alison Hopkins has reacted angrily to Sadiq Khan's decision to allow the Cricklewood Aggregate Superhub to go ahead.
In a statement for Wembley Matters she said:


This just shows that protests by some Brent councillors to the Mayor of London were simply grandstanding in the run up to the election: those photos of them wearing facemasks were a stunt. When Brent Labour realised the depth of fury at the proposals for both the aggregate terminal (Cricklewood Superhub) and the waste transfer facility (WTF), Cllr Butt hastily asked Barnet to arrange a so-called “consultation” meeting at the Crown, earlier this year. But, Brent councillors had ALREADY had presentations from Barnet about how wonderful Brent Cross would be back in October 2017! They didn’t bother telling any residents about the WTF planning application though – and there have been far too many cosy behind the scenes meeting between both the Leaders of both councils and senior officers, as well as with developers.


Sadiq Khan is the latest Mayor of London not to support people in Brent, Barnet and Camden who oppose the Brent Cross “Regeneration” and the resulting mess. Livingstone lauded it, Boris approved it and Sadiq has rolled over in front of the juggernaut that is Hammersons and the Brent Cross developers. There’s far too much cosiness in all this. Originally, for example, the North London Waste Authority objected to moving their WTF to “our” side of the tracks. . They suddenly withdrew ALL objections at the last possible moment . I've done several FoI requests since, but they are evasive as hell on the subject. Add in the fact that the developers have consistently been mendacious about so called consultations and the results of said consultations and you’ve the perfect storm.


As I’ve said before, those of us who live on the edges of Brent and Barnet are ignored by our respective councils. In Dollis Hill we could end up being the filling in a sandwich of rubbish dump and aggregate terminal.


I've asked Barnet Council when the WTF will go to their Planning Committee, but they’re being very evasive on that. The recent rubber stamping of what’s known as the Brent Cross CPO3 – Compulsory Purchase Order 3 – by the Secretary of State might have been a very different matter if there had been real political opposition from Brent councillors and MPs. But instead, what happened was active support by Brent for road layout changes which will have an appalling impact on people in Dollis Hill and Cricklewood.


But then, I’ve an email from one from one councillor who thinks the WTF isn't that bad – and during the elections, Labour canvassers and councillors simply didn’t know the difference between the aggregate terminal and the WTF. One of them actually told me that the WTF had been given planning permission by Paul Lorber. (!) They also consistently told local people that it was far too late to stop the dump or the aggregate terminal. That really wasn’t the case, but it would have taken real political will and challenge which seems to have vanished entirely.


Both the WTF and aggregate super hub are a disaster for us all. It's also appalling that what used to be a cross party and almost all party campaign against the so-called Brent Cross regeneration  is now not. This transcends party politics and ought to have had proper opposition from Brent and from local MPs as it once did. Navin and both Carolines are honourable exceptions in all this, as are the local Greens, but who is actually standing up for us?


Wembley Matters some time ago covered  the campaign against the Brent CCG's decision to end funding for the Harlesden based Sickle Cell Society's local  advice and support project LINK  so I am delighted to post this news direct from the Society's website:


We have beaten more than 350 organisations from all over the UK to be one of the eight winners of the 2018 GSK IMPACT Awards, a national award that recognises charities that are doing excellent work to improve people’s health and wellbeing. We received £30,000 in funding as part of the prize, as well as expert support and development from The King’s Fund at a ceremony held at the Science Museum in London on the 17th May, along with seven other GSK IMPACT Award winners.

An estimated 15,000 people in the UK have sickle cell disorder (an inherited blood disorder mainly affecting people of black African and African Caribbean heritage). The condition can cause chronic fatigue, pain, damage to vital organs and leads to early mortality.

The award recognises both our community-based services and our influence on national policy. Lisa Weaks, Head of Third Sector at The King’s Fund, said:


One of the impressive things about the Sickle Cell Society is that it is offering services at a community level but is also able to influence national policy. It has been instrumental in establishing national standards for the care of people with sickle cell disorder while ensuring these are firmly rooted in community needs.

Our other services which were praised include our national telephone helpline which offers support and information, our mentoring scheme for younger people with the condition and our Breaking Down Barriers outreach programme which targets people from Portuguese-speaking and French-speaking communities.


They also noted our guidelines on blood transfusions which we produced in 2016 that focused on improving the experience of people with sickle cell disorder by causing less discomfort and improving efficiency. It is estimated that this could save the NHS £13 million per year. As well as this, they praised our work to improve screening of pregnant women at risk of having a child with sickle cell.


I was absolutely delighted to find out we had won. Over the past five years we think we have been doing great work with patients, their families, and our partners in the NHS, NICE [National Institute for Health and Care Excellence], and industry and so it is really good for that to be recognised.

It is fantastic recognition that we are doing good work for people with sickle cell disorder, and I am sure it will further enhance our reputation in the sector. For funders it sends the message that we are delivering value for money. The leadership support will also help us to chart the next stage in our journey.

Developing leaders in the charity sector is an important aim of the GSK IMPACT Awards programme, which has now been running for more than 20 years, and the Society will have access to training and leadership development tailored to our needs. We will also be invited to join the GSK IMPACT Awards Network, a national network of almost 80 award-winning health and wellbeing charities working together to develop their leaders, find new ways of working, and support others.

Thank you to all those who support our work and who work tirelessly to help improve the lives of those living with sickle cell.

You can find more about the awards here: LINK


Brent Patient Voice (BPV) is delighted to congratulate the Brent-based Sickle Cell Society on being one of eight national winners in the GSK Impact Awards 2018, along with a prize of £30,000. This was in recognition of its work with the local sickle cell community and its influence on national policy. We find the award rather ironic in the light of the withdrawal of funding by Brent CCG in 2016 for the Society’s promising local support and advice project - a decision strongly contested by BPV.