Duffy back on the attack over Kingdom contracts procurement

In a circular to fellow councillors Cllr John Duffy has raised further concerns over the  awarding to Kingdom of Brent Council's fixed penalty notice littering contract and additional ones after the company was awarded a BHP security contract LINK.

Just a few notes from the exhibition event HS2 held in South Kilburn studios on Monday, which might be useful for those who couldn’t make it (and even for some who did).

As ever, lots of boards with maps and lots of HS2 people standing around waiting to sell you their  pet project. Though whenever I asked a question it was never the person I asked who could (attempt to) answer it. We, of course, are expected to understand every aspect of what is going on. While I was there (late afternoon) there were not many members of the public (maybe 6 during the 3/4 hour I was there). As ever, this may well get portrayed as a lack of interest, taking no account of the fact that of those who heard about the event (see below) many would have felt there wasn’t much point in going, or couldn’t make the times (3-7) it was held. Funny how they could send everybody a letter (twice) by recorded delivery saying they might need to CP0 their property, yet can neither rescind these notices (by sending everybody a letter) nor ensure delivery of letters they consider less important).

My first question was about distribution of the notice of the event, knowing that I only knew about it by other means and at least some others in Gorefield House had not had notice. First reaction – as always – was to say it had been delivered, then to retreat into “I know there was at least one block the contracted delivery firm couldn’t get into and we asked for them to send them via Royal Mail, I will check if that happened”. I pointed out that I live on the ground floor with direct access, but that didn’t seem to compute. I also said that it was bit late if they found out now that it never happened.  This is a recurring problem, whether with the Council direct or others (such as the film company last year). They either don’t bother to deliver, or do not check if it has happened.

Another issue which comes up regularly is the maps that are used (people may remember that at the parliamentary enquiry into HS2 we pointed out the inaccuracy of their maps). In this case it seemed questionable as to whether they recognised that Canterbury Road does not continue on to Coventry Close, but that there is a section which is just footpath. Cathedral walk was certainly not named on any of their maps. Maybe this is why some people seem to think it is okay to drive vehicles along the footpath.

Part of the significance of Cathedral Walk is that during their test drilling, and later during the main work, they may find they have problem with utility pipes etc, in which case they would need to do work on them, which could mean taking up part of Canterbury Road and Cathedral Walk, something they will otherwise not need to do.

This event was primarily just about the test drilling, not the main construction. Even so, I was able to ask again about lorry movements etc. This will be of particular interest to people in Albert Road and Canterbury Terrace. For the main construction there will be 100 heavy lorry movements a day (50 in, 50 out). They will enter the site along Albert Road from the Queens Park end, entering  the site through the railway entrance at the end of Albert Road. They will leave through Canterbury Works and turn into Canterbury Terrace and back down Albert Road. When I raised (again) the issue of the narrowness of Albert Road to take these vehicles, I got the response from the “traffic guy” that he had just realised this and they would need to look at how they overcame the problem! We’ve only been pointing this out for years, after all. One thing they will probably do is make Albert Road one way (for other traffic, not HS2) with a diversion.

Their plans also show the loss of 15 parking bays on Albert Road during construction. When I asked where those people were expected to park, I was told wherever they can. No provision will be made for alternative parking. When I pointed out the lack of parking spaces in the estate already, I got a shrug of the shoulders. I also asked where site workers were going to park and was told they would be `expected’ to use public transport. When I asked `yes, but what if they do bring their cars”, he said they would need to pay for parking. And what if they use residents parking bays, as was a constant problem with the construction site on Alpha Place? `That’s up to the Council to enforce’. More wry laughter from me.

An issue of particular concern to many of us is working hours and enforcement of them. I was told that working hours are restricted to 8-6, BUT that they are allowed half an hour each side for preparation. They said they would also take account of the fact that they would be next to the school, but I could not get an answer as to what this concretely means. From bitter experience, I asked how all this would be enforced and was told “these are top tier contactors who will know that have to keep to the rules”. I pointed out that Wilmott Dixon is also considered a pretty “top tier” construction company and had repeatedly flouted the rules, I was told this wouldn’t happen with HS2. When I asked about enforcement, I was firstly told the Council (wry laugh from me!) and that people could send in reports and photos of infringement. As if we hadn’t been doing so for years with no effect. They gave me a copy of their “Residents Charter” and their “Code of Construction Practice”, but we have seen such promises before. Hopefully these are worth more than the paper they are written on, but we will obviously need to keep a close watch.

Lastly, I have been asking at every opportunity for years whether it creates problems that they will be tunnelling for HS2 underneath the Bakerloo line and never got an answer. Finally spoke to someone who knew what he was talking about, who said, yes, there are particular issues and `we will need to monitor whether our tunnelling causes the Bakerloo tunnels to sink. We don’t expect them to, and we don’t foresee having to close the Bakerloo line (or the mainline nearby) at all’.

22 Jan 2017 — Harrow Hill Trust undertook a detailed assessment of the hundreds of pages of application documents submitted to seek planning permission. (Harrow School's development on Metropolitan Open Land) This assessment included many pictures and constructive ideas and was dated 11 June 2016 and was hand delivered. Despite being hand delivered, two phone calls in the summer, which included the case officer, a further hard copy and a letter of complaint it finally appears 7 months late on the Harrow.gov.uk website. This is of course now after the first public planning meeting of 16 November. The assessment can be seen at the Harrow by searching for application P/1940/16 . Your support is appreciated. Thanks

The Harrow Council Planning Website is not exactly user friendly so I have reproduced the full submission below. Click on bottom right corner for a full page.

From London Councils. Clearly we need to campaign to preserve London school funding and for an increase in the total amount spent on schools so that children outside London receive fair funding. 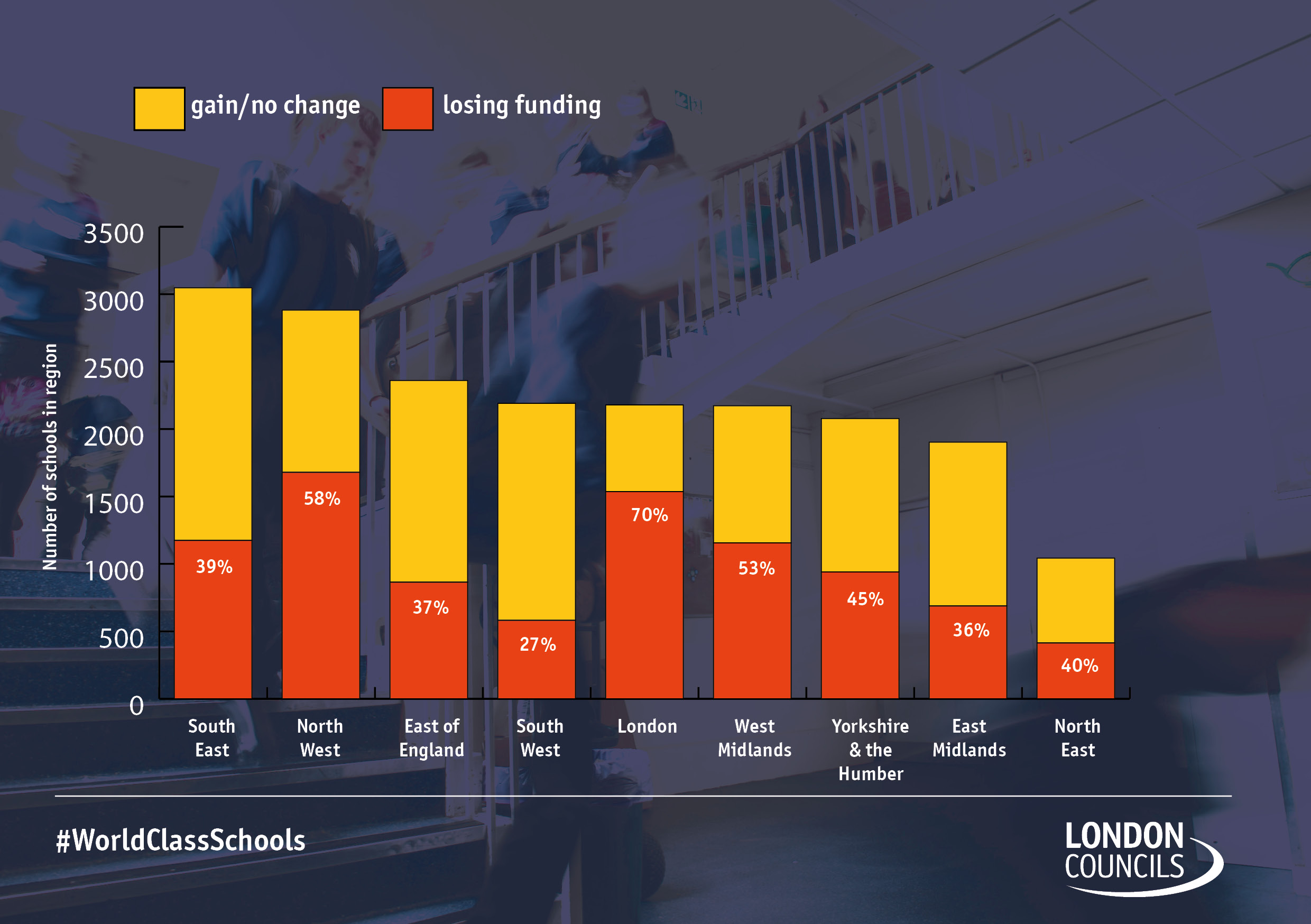 Taking this into account as well as the increased cost pressures identified by the National Audit Office, London’s schools will need to make savings of £360 million in the first year of the new national funding formula (2018/19) to balance their books. No school will gain enough funding from the NFF to compensate for increased cost pressures due to factors such as inflation, pensions and national insurance.

As around 70 per cent of a school’s budget is spent on staff salaries, funding reductions are likely to result in fewer teachers and support staff posts in schools, as well as increased class sizes.
This is significant because top quality teachers who are motivated and highly skilled are the main reason that children make progress and achieve good results in their education.

Without the right qualifications and skills, London’s children will be unable to access jobs and contribute to the national economy. Over 60 per cent of jobs in inner London require a degree and around 45 per cent of jobs in the rest of the capital require a degree.
Analysis of the NFF shows that:
Combining the impact of the introduction of the NFF and wider cost pressures, headteachers at London schools will have to make savings totalling £360 million in the first year of the NFF (2018/19).
The savings required are equivalent to:

If the government’s proposals are brought into effect, 70 per cent of schools in the capital will face budget cuts, on top of pre-existing funding reductions. London will also see larger reductions in funding than anywhere else in the country.

This comes on top of National Audit Office figures showing that educational standards across the country could plummet as schools in England face an 8 per cent real-terms cut per pupil by 2019/20 thanks to wider cost pressures.

Taking everything into account, London’s schools will need to make savings of £360 million in the first year of the new national funding formula in order to balance their books.

But at a time when UK schools are seen as underperforming by international standards, and when businesses based in London are facing massive uncertainty about recruiting skilled staff, there is an urgent need to invest in schools in London and across the rest of the country.

More on the situation of schools in Brent HERE
Posted by Martin Francis at 15:23:00 No comments: