Welcome back! If you missed Part 5, please click on the “link” to read it. We’ll begin this week with a look at some local homes. 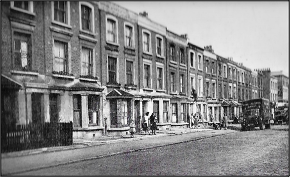 By 1900, there was a growing divide in Kilburn between the more prosperous north and the poor south. The conditions in some areas of South Kilburn were dire – in 1881 a report was made to a meeting at Kilburn Town Hall on the living conditions in Victoria Place, behind the Cock Tavern. 161 people, including 84 children, lived in 26 small dwellings, which were accessed from the High Road along a narrow passage, which went by the pub’s urinal, the walls of which were covered in bad language.

In 1898 the Vestry reported on ‘houses let in lodgings’ in Palmerston Road and Kelson and Netherwood Streets off Kilburn High Road. Although they did not see any cases of ‘actual want or destitution’, many of the residents kept hens as a source of food in winter when men were out of work. Houses were in need of cleansing and the repair of plaster. ‘The total number of souls in the 160 houses was 2264, of which 668 were children under 10 years of age, an average of a little more than 14 for each house, against 7 for the rest of the Parish.’

Kilburn Vale, on the Hampstead side, had been reported to be ‘in a most foul, unwholesome state, well before the turn of the century’, and remained slums until the 1930s. 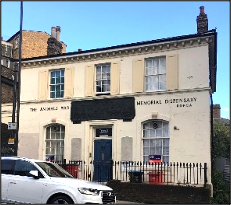 It wasn’t just people who needed better treatment. An interesting memorial commemorating World War I is located at 10 Cambridge Avenue. In 1931 the RSPCA bought this building for the Animals War Memorial Dispensary, as a practical tribute to countless horses, dogs, donkeys, pigeons and many other types of animals used by the army and who gave their lives for their human masters. The dispensary was where ‘the sick, injured or unwanted animals of poor people could receive, free of charge, the best possible veterinary attention, or a painless death.’ By the mid-1930s, more than 50,000 animals and birds were treated at the Kilburn Dispensary. It closed in 2016.

The years between the First and Second World Wars also saw the emergence of large-scale municipal housing, in particular the Westcroft Housing Estate on the Hampstead side. In the 1930s some new developments, in particular on Shoot Up Hill, took the form of mansion blocks of flats. On the Willesden side of the High Road, however, there was little in the way of housing improvements for people in Kilburn during the inter-war years. 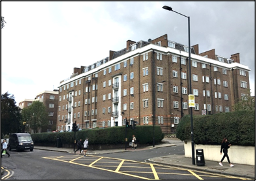 The overcrowding and living conditions in South Kilburn meant that many people lacked basic amenities for washing, and the opening of Granville Road Baths in July 1937 was a welcome addition to local facilities. Willesden Council bought a terrace with cottages and stables at the rear, and the baths were specially designed for the confined site – nevertheless, providing not only a 100ft x 33ft swimming pool with diving boards of a competition standard, but also private slipper baths (where people could have a bath for a small fee), lockers, cubicles and a public laundry with a washing machine. A superintendent lived in a flat on the premises.

4. Granville Road Baths, and a Leon Kossoff painting of the swimming pool. (Images from the internet)

The baths became a subject of paintings by artist Leon Kossoff in 1960s, who had his studio in Willesden. They continued to be a popular local facility until demolished in 1990s, and now the space is occupied by Len Williams Court.

Whatever Kilburn lacked in home comforts, there was no shortage of places of entertainment, and we’ll take a tour of some of the grander venues over the years. The Kilburn Theatre Royal, which occupied the former Kilburn Town Hall building in Belsize Road, operated as a cinema from 1909 to 1941, known as the Kilburn Picture Palace and Theatre of Varieties. In later years the building housed Shannon’s Night Club, a warehouse and a Decca Recording Studios in 1990s. It is currently used as offices.

5. A Theatre Royal poster, and the Kilburn Empire, early 1900s. (Images from the internet)

The Kilburn Empire, opened in 1906 at 9-11 The Parade (the triangle of Kilburn High Road and Kilburn Vale), offering music hall, circus and films (the great escapologist Houdini performed there in 1909). It remained a cinema under various names until 1981, was then used as a religious building, and a paint-ball game centre, until demolished in 1994 to make way for the Regents Plaza Hotel.

The Grange Cinema opened on the site of the The Grange mansion in 1914. It had over 2,000 seats, a stage, an organ and the Winter Garden café, and was the largest purpose-built cinema in the country at the time. Sixty years later the cinema closed, and the building became the National Club in 1976, and was a popular music venue for the large Irish community in the area. As well as Irish showbands, it featured many famous performers, including Johnny Cash, Simply Red and David Bowie, until it closed in 1999. Now the building is used by the Universal Church of the Kingdom of God, and since 1991 it has been a Grade II listed building. 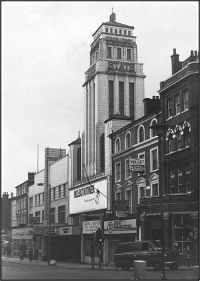 The biggest jewel in Kilburn’s crown was the Gaumont State Cinema, which opened on 20 December 1937. Owned and commissioned by the Hyams brothers and designed by the famous cinema architect George Coles, it seated 4,000 people, had a separate dance hall and a restaurant. It was the largest cinema in Europe at the time, and remains the third largest ever built in the UK. The 120 feet (37 metres) high tower inspired by a 1930s New York skyscraper, housing its own radio studio, could be seen for miles and immediately became the local landmark. The opulent interior reflected the trends of the day and included a Wurlitzer organ on a rising and revolving platform, which remained one of the largest fully functioning Wurlitzer organs in Britain well into 21st century, and one of the few remaining in its original location.

From the opening performance which starred Gracie Fields, George Formby, Larry Adler and Henry Hall and his band, the Gaumont State became a popular entertainment venue, hosting variety, pantomimes, circus, ballet and concert performances in addition to film screenings. Over the years it featured such acts as Bill Haley, Buddy Holly, Jerry Lee Lewis, Ella Fitzgerald, the Beatles, the Rolling Stones, David Bowie, the Who and many others.

In 1980s the building became Mecca Bingo. In 2007 it closed and was under the
threat from developers. Eventually it was bought by Ruach City Church, 70 years to the day after the original opening of the Gaumont State. The building has a Grade II listed status.
(You can find more information on music venues in Willesden on Music Maps here - https://www.notjustcamden.uk/maps/ )

During the Second World War Kilburn suffered some bomb damage, but not on a massive scale, which is lucky, considering the concentration of railway lines in the area. The first raid hit the area around Kilburn High Road on the Brent side in September 1940. 1944 was one of the worst years, with V1s arriving later that year to hit West End Lane, Ardwick Road, Burgess Hill and Fortune Green Road, as well as the Willesden side of Shoot Up Hill. The writer, George Orwell, had to rescue his books and other belongings from the flat in Mortimer Crescent, where he had written “Animal Farm”, after that was destroyed by a V1. In January and March 1945 two V2 rockets brought greater devastation damaging hundreds of houses on Hampstead and Willesden sides – the latter being in Dartmouth Road.

By the end of the war there was an urgent need for housing, and factory-built houses (popularly known as “prefabs”) which could be put up quickly on cleared sites were a temporary solution, although a few of them stayed until 1960s. On the Hampstead side there was a large prefab estate around Lichfield Road and Westcroft Close. Willesden had large sites of them elsewhere in the borough, but there were 28 prefabs around Christchurch Square, Close and Terrace and 33 more in Christchurch Avenue. 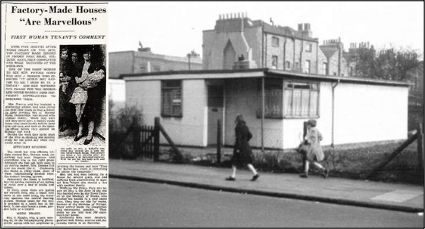 9. The 1945 "Willesden Chronicle" article and a Uni-Seco prefab of the type built at Priory Park Road.
(Cutting from the local newspaper microfilms at Brent Archives, photo from the internet)

A small prefab estate in Priory Park Road was the first one to be built on a cleared bomb site. On 26 October 1945, the Willesden Chronicle reported that work on the site began on 1 May, the houses were erected quickly, but had to wait a while for fittings. It was well worth the wait for the delighted occupants, who came from overcrowded homes in various parts of the borough and ‘could hardly find sufficient superlatives’ to describe the new dwellings of their own.

The wider aim of providing better housing in Kilburn after the war was inspired by Patrick Abercromie’s 1944 Greater London Plan. Obsolete industry, overcrowded and dilapidated slums were to be replaced with housing and community facilities. Unfortunately, many Victorian buildings also had to go. The housing conditions were particularly bad in Carlton / South Kilburn. The Willesden Survey of 1949 stated that this was the area with the highest average density in the borough, in some cases with 15 people in two-storey houses. Many of the bigger houses, built in 1850s-60s for wealthy families were being let as single rooms to boarders. 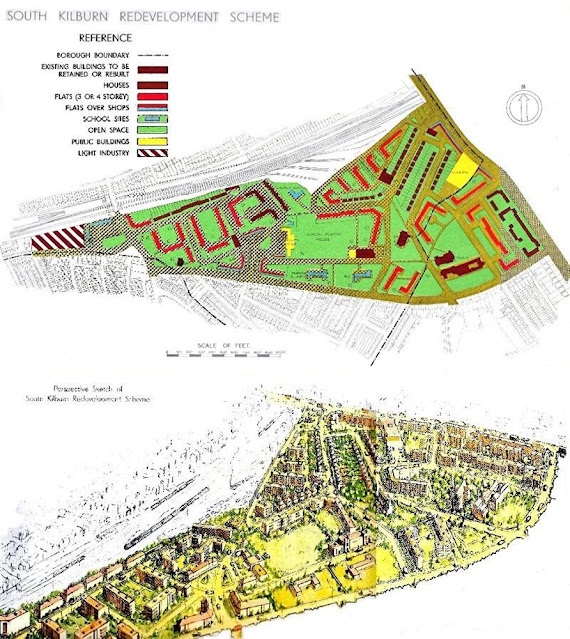 The South Kilburn redevelopment plan was drawn up in 1948, covering an area of 87 acres between the main line railway in the north, and Carlton Vale / Kilburn Lane in the south. Much of its new Council housing would be in three or four-storey blocks of flats, and the first of these were built on bomb-damaged sites at Canterbury Terrace and Chichester Road.

Under Willesden’s original plans, there would have been plenty of green space, with a large area of school playing fields at the heart of the redevelopment serving three schools. At the western end of the playing fields would be a shopping area, providing all local needs, and a community centre (possibly including a branch library).

12. Percy Road, South Kilburn, just before its development in the 1960s. (Photos courtesy of John Hill)

However, as the scheme moved into the 1950s, and was extended in 1963, taller blocks of flats began to form part of the plans. Percy Road, in the photos above, ran south from Granville Road, opposite the baths, across Carlton Vale and down towards Malvern Road. It was virtually wiped off the map during the redevelopment, with the Immaculate Heart of Mary R.C. Church (seen behind the playing children in the colour picture – entitled “Last Days of Percy Road”) one of the few buildings to survive, and now Dickens and Austen Houses would be behind you. The final phase of this part of South Kilburn’s redevelopment ended in the 1970s.

13. Two views of Cambridge Road, from the early and late 1960s. (Photos courtesy of John Hill)

The photos below show the western end of the South Kilburn redevelopment in progress, with William Saville House (and William Dunbar House behind it) already built in the first picture, while construction is underway on Craik Court, which hides them in the later colour view.

Further north, in the early 1960s, Kilburn Square saw the replacement of its 3/4 storey Victorian terraced houses with a shopping centre and market, along with a 17-storey block of flats labelled the 'pocket skyscraper' (officially just numbers 11-90 Kilburn Square!). 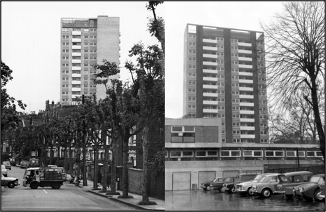 We will finish this series by looking at modern Kilburn, from the 1970s onwards, next week. I hope you can join me then.