Cara Davani and Christine Gilbert – Brent’s cover-up continues (or, another Deputation that the Council would not hear!)

In the run up to the General Election we will be giving you the opportunity to get to know some of our candidates. Our key candidates and spokespeople can be found here.

This year we will be standing in over 90% of seats in England and Wales.

Our featured candidate for Hampstead and Kilburn: Rebecca Johnson

Why are you standing as a candidate?

I'm a feminist peace activist committed to participatory democracy. After joining the Greens I supported getting Caroline Lucas into Westminster and canvassed on behalf of other smart, committed Greens standing for local councils and the European Parliament. So when I was asked to put my name forward this time, how could I say no?

What are your top 3 priorities if elected?

1) Transforming British democracy. It makes me so sad to hear voters in Hampstead and Kilburn say after a hustings that they think I'd make the best MP, they love how I argue for the Green Party's joined-up policies across all issues, but they feel they have to vote for another candidate as it's a marginal seat and they don't want a Tory MP. British politics alienates more people than it engages, especially young people, because under the stale 'first-past-the-post' system, most of us feel that our votes don't count. So we need genuine proportional representation – constituency-based single transferable votes for the House of Commons. We should lower the voting age to 16, and of course replace the unelected House of Lords with a proportionally-elected and much more effective Second Chamber.
2) Tackling homelessness and poverty here, notably in parts of Kilburn. That means ending the scandal of empty houses, reforming Council tax banding and investing in genuinely affordable social housing, and bringing in legislation so that the private rental sector is better controlled to provide fair rents, better accommodation and more secure tenancies.
3) Scrapping Trident and putting the billions we would save into our real security needs, such as a truly world class NHS, lifelong education opportunities, and protecting our planet from the biggest security threat of all, humanity's pollution and climate change.

What made you want to get into politics?

I've been engaged in British and UN politics as a feminist peace activist for many years, promoting equality, social justice, disarmament and environmental responsibility. I lived for five years at the Greenham Common Women's Peace Camp to get rid of one generation of nuclear weapons, and then for Greenpeace to ban nuclear testing. Successful in both, but we still have to scrap Trident and build security without nuclear weapons. I decided to join the Green Party in 2009, when I could no longer fool myself that Labour would transform itself into an effective socialist party with the courage to tackle climate change, nuclear disarmament, poverty and homelessness.

What are your favourite things about the constituency?

I love the community spirit here, from parishioners in South Kilburn and Queens Park determined to stop HS2 from destroying their homes and schools, to Belsize Park residents and shopkeepers campaigning to defend their local jobs and shops against Tesco and its identikit, low-pay, profit-first model. And I love cycling to Hampstead Heath and swimming in the women's pond... an oasis of bliss while busy london fades into the background!

Who is your political hero?

Sylvia Pankhurst – the socialist suffragette committed to practical activism on behalf of London's poor, especially hardworking women from British and immigrant communities in the East End. She was feminist, courageous in her commitment to peace, and worked closely with Keir Hardie, Labour's first MP, in breaking the Tory-Liberal two-party stranglehold. From Greenham onwards, I've worn the green, purple and white ribbons of the suffragettes. We must honour their struggle for the vote by refusing to throw our precious democracy away in "tactical" voting for the "least worst" of today's inadequate TweedleCon and TweedleLab parties and their short term political machines. Our votes can bring in the transformational policies this country and our planet need. 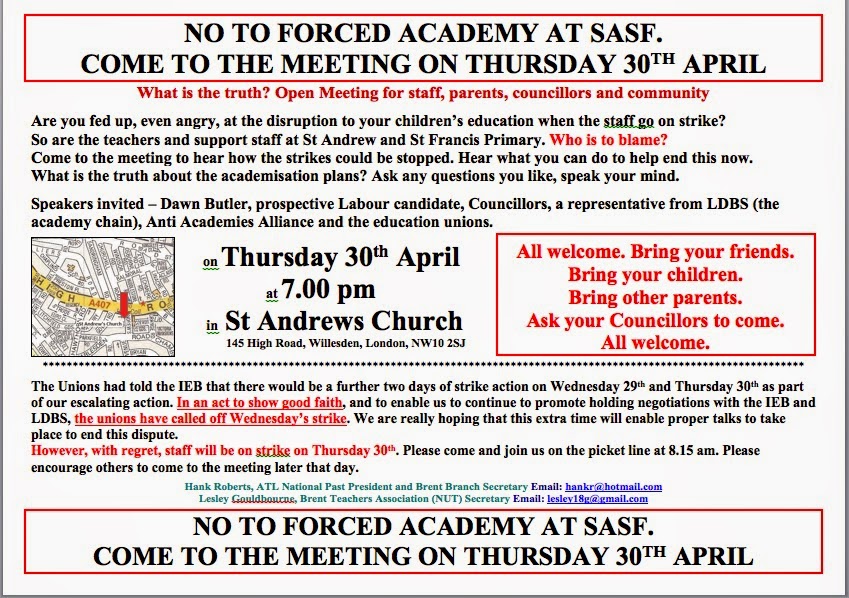 Teaching unions had planned two days of strikes this week against forced academisation  at Andrew and St Francis Primary School in Willesden on Wednesday and Thursday of this week.

Today they announced that they would call off Wednesday's strike in 'an act to show good faith' in order to enable them to promote negotiations with the Interim Executive Board (the body that replaced the governors). The Unions said 'We are really hoping that this extra time will enable proper talks to take place to end this dispute.'

Thursday's strike is scheduled to go ahead and will be followed in the evening by a Public Meeting to discuss the issue. 7pm St Andrews Church, 145 High Road,  London NW10 28J

Brent Equalities and HR Action Plan under Scrutiny on Thursday

An important meeting takes place on Thursday which I hope will not be over-shadowed by the General Election campaign.

At 7pm the Scrutiny Committee, meeting at the Civic Centre, will be considering the Action Plan LINK that has been formulated as a result of the Pavey Review in Equalities and HR Policies and Practice LINK .

The Pavey Review was commissioned following the Employment Tribunal case which found Brent Council and Cara Davani (Head of HR) guily of racial discrimination, victimisation and constructive dismissal.  Interim CEO Christine Gilbert was also named in the Judgment. However the Pavey Review did not set out to look at this particular case.

Brent Council rather than take any action over the personnel involved decided to go to appeal but a Judge ruled that such an appeal had 'no prospect of success'. LINK

The public and press can attend the meeting. 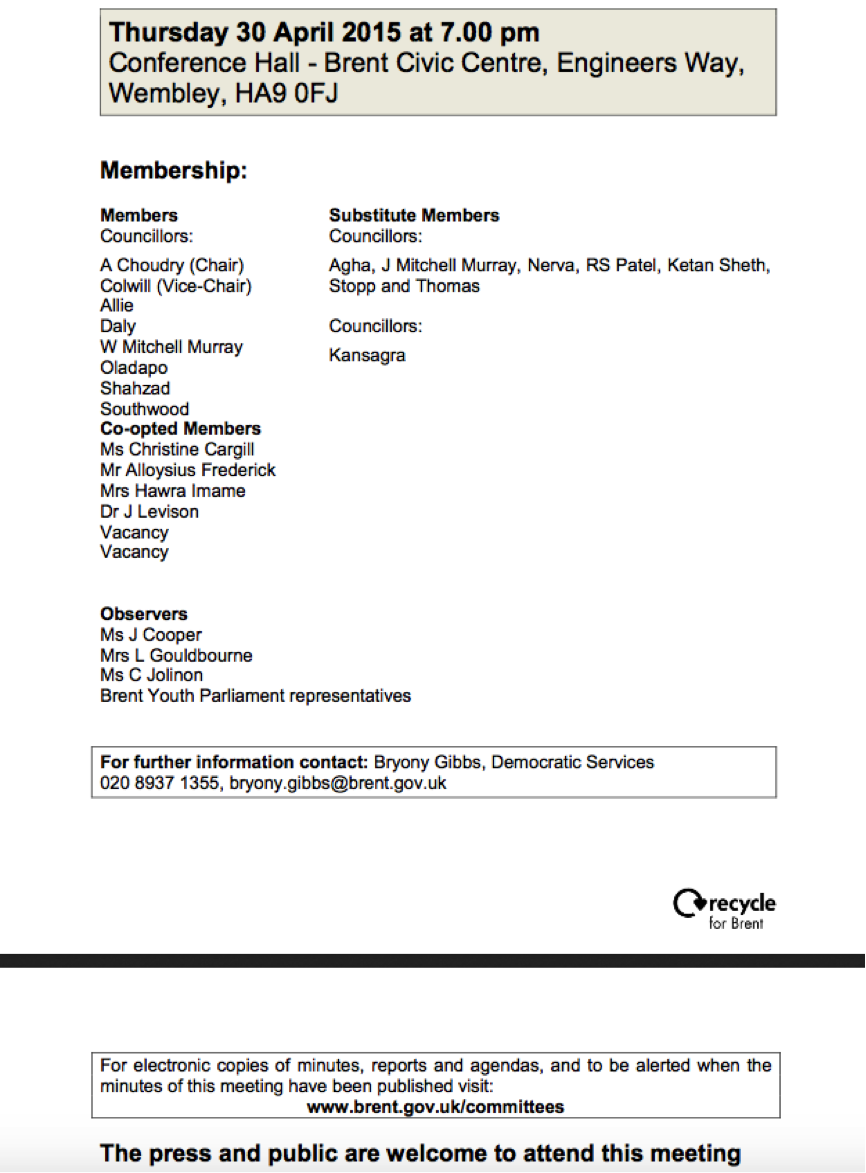 
Preston Community Library is now open. There is a selection of newspapers, and books available to borrow. The creative writing and Scrabble groups continue to meet on Monday afternoons, and there are now English classes on Fridays as well as Mondays.

This Wednesday, 29 April, Samantha Warrington will be holding her first yoga class, and she's hoping to add weekend classes for parents and children in the very near future. Wednesday's class will be from 7.30 to 8.30; participants need to arrive by 7.15 to register. If you'd like to join either of these classes, please ring Samantha on  07801 697712.

We're planning to add healthy eating classes, knitting classes, a homework club and a community cinema very soon. If you're interested in any of these, let me know.

At the moment we are open to the public from 12.30 - 7 on Mondays and from 11-5 on Saturdays. We want to extend these hours very soon. To do so, we need more volunteers to staff the library, and we're holding a meeting for potential volunteers in the library building this Wednesday, 29 April, at 2pm. If you have some spare time and would like to contribute to the success of a really important project, please come and see us between 2 and 4 on Wednesday.

Finally, this evening sees our next pub quiz at 7.30 in The Preston. Fortunately enough, I've just finished writing it. We aim to start the quiz promptly at 8. We hope to see lots of you there. 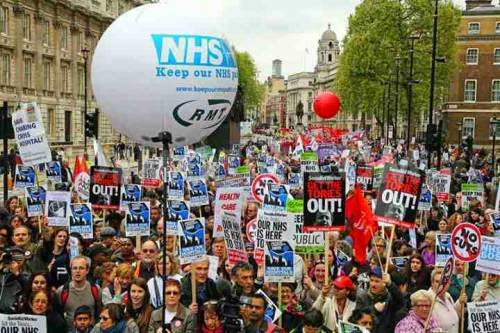 The Mansfield Commission's Interim Report into the Shaping A Healthier Future consultation states of the programme that would rsult in the closure of four of the nine acute hospital sites in the North West London area and the loss of Central Middlesex A&E: HERE