An angry, passionate account of the history of Bridge Park by one of its founders Leonard Johnson. He rallies the Black community to get behind the campaign for Bridge Park and calls on them to ignore rumours that attempt to undermine his reputation.
Posted by Martin Francis at 15:55:00 1 comment:

Gail Tolley, Director of Children and Young People's Service in Brent, confirmed yesterday that a new 6 forms of entry secondary school will be built on the site of Chancel House, Neasden Lane. It will be a free school with Wembley High Technology College, an academy, as its sponsor.

Originally it was intended to refurbish the redundant DWP building, Chancel House (above) to accommodate the school but the Education Funding Agency (EFA) decided demolition and new build was preferable.

A new secondary school south of the North Circular Road has long been a demand from  residents in Willesden, Harlesden and Church End following the closure of Sladebrook High School. Neasden High School,also closed, was just on the other side of the North Circular, on that section of Neasden Lane.  Parents made the case for a school which will be at the heart of the local community. Brent Council decided not to go ahead with a possible secondary school on the Bridge Park-Unisys site as part of the regeneration. The school has the project name of North Brent School LINK but this will obviously be revised.

Interestingly Gail Tolley said that the site had been considered by the EFA for the ill-fated (and expensive to the public) Gladstone Free School. LINK

There is of course some uncertainty over the future of Brent's European families regarding Brexit and this will need to be taken into account in school places planning.

The EFA has also approved a Free Special School to be set up by the Brent Special Academy Trust on a site in the Avenue and has again opted for demolition of the existing building and building of a new school.  At present many children are transported outside the borough due to the lack of special provision in Brent.

Responding to the plateau in reception primary school applications and vacancies in some school the Ark Somerville Primary, which will be built on the car park of York House, has been reduced to 2 forms of entry. LINK
Posted by Martin Francis at 15:07:00 No comments:

From the Football Association (Community)


We have a large number of furniture items that we no longer need and are therefore in the process of donating them away. We have made contact with a few charities but it would be great if we could find a local home for most of it.

With the exception of a small number items, most pieces are in good used condition.

Please note that if you are interested in taking some of this furniture, you would need to make plans to have it collected by the end of next week. You can do this by simply emailing  Community@thefa.com Subject line **free furniture**

Some issues for the St Raphael's consultation meeting on December 8th 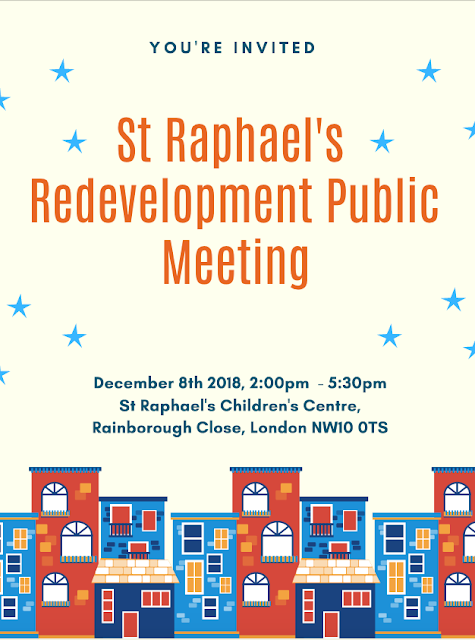 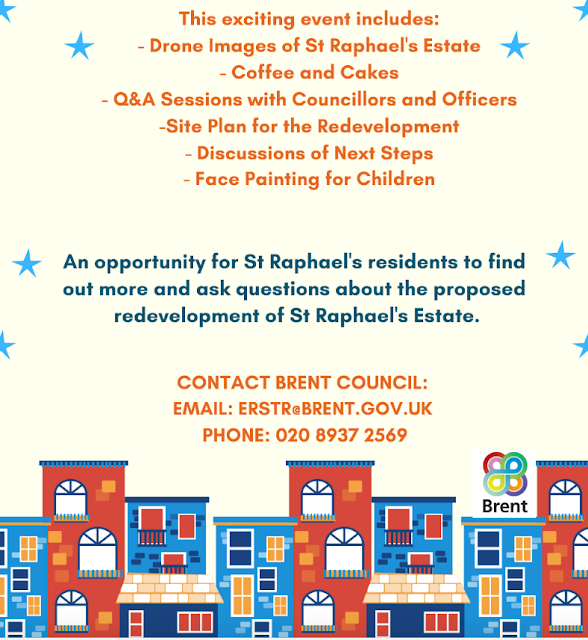 Brent Council will be consulting with residents on the St Raphael's Estate next Friday on their plans to redevelop the estate. St Raphael's will be the first estate where residents will be balloted on the changes.

Concerns have been expressed on social media over possibilities of gentrification and social cleansing with private housing being built on the estate to help pay for the redevelopment. There are also worries over the potential for the loss of green space, not just in the area surrounding the estate which stretches to the River Brent, but within the estate itself.  People are aware of what happened in West Hendon with private developments next to the Welsh Harp reservoir and social housing close to the poor air quality main road. St Raphael's borders on the heavily polluted North Circular.

Another issue is the need to ensure the future of the premises of various community groups, nurseries, children's centre and the Sufra Foodbank and Edible Garden if new blocks are to be built requiring additional land. 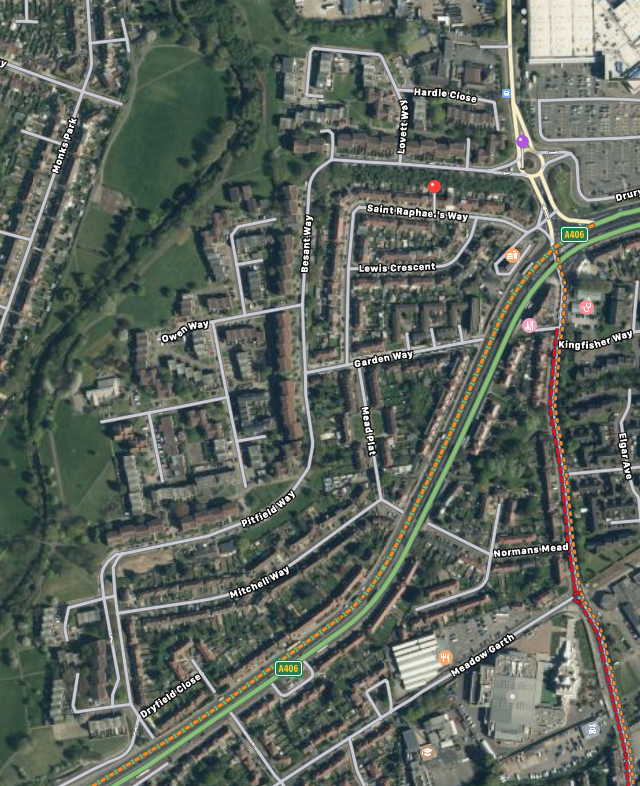 St Raphael's Estate is on a flood plain for the River Brent. There are artificial hillocks between the river and the estate which protects it to some extent but locals speak of underground springs in the area. They suggest that this could limit any high rise developments. There was flooding in the area in the 1970s.

With climate change underway the flood risk is clearly something to be considered. This is the longer term risk from the Environment Agency: 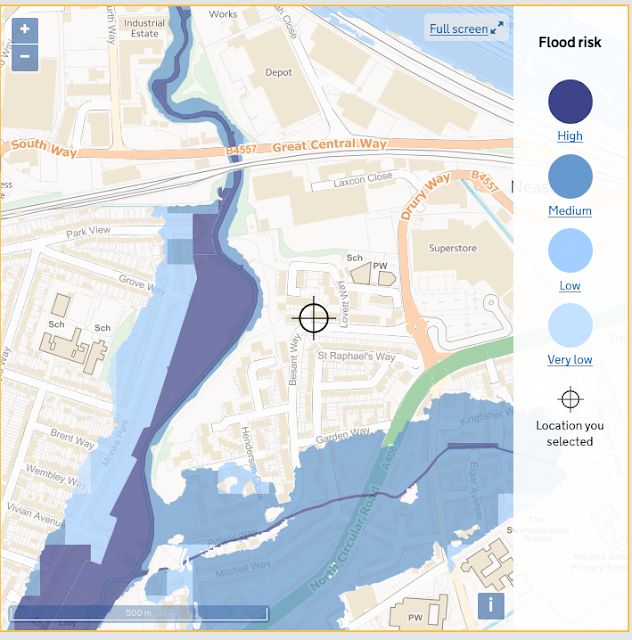 
Brent Clinical Commissioning Group (Brent CCG)  at its meeting on December 5th is likely to go ahead with a proposal to move from Wembley Centre for Health and Care in Chaplin Road, to Brent Civic Centre.

Brent Council already lets out two floors in the Civic Centre to external organisations and is due to cut their staff further in the next budget.

The report going before the CCG states:

The CCG has expressed an interest to be co-located with Brent Council in its Civic Centre (subject to affordability and commercial terms). Equally Brent Council is extremely keen and supportive of this move and fully recognises the opportunities for greater collaboration that co-locating would bring.

The current HQ premises are spread across the Wembley Centre for Health and Care site with staff working in silos largely within cellular offices. This is not an efficient use of space nor does it foster cohesive working arrangements.


Releasing space at the Wembley Centre for Health and Care, under the NHS Property Services vacant space policy, potentially creates an opportunity to reduce CCG running costs. Strategically this also supports the future aspirations for the site to become an out of hospital hub, appropriately sized and fit for purpose.

There are 76 staff working at Brent CCG, the accommodation on offer at Brent Civic Centre is 48 dedicated desks together with shared offices and breakout areas. This move would require the CCG to adopt the NWL Agile Working Policy which recommends a staff to desk ratio of between 6:10 and 7:10. The proposal complies with the policy with a ratio of 6.3:10. The CCG is required to reduce its office accommodation and desk allocation across its estate; as such this proposal is in line with the overall strategic direction being adopted across NWL.


Current estimated project costs are £85,500 to be covered from existing revenue funding.

Wembley Matters has approached Brent Council for a comment on how the possible extension of Tottenham Hotspur's use of Wembley Stadium up to May 2019 would affect the timetble for removal of the stadium pedway and its replacement by steps. The request was made more than a week ago and despite reminders no answer has been received.

The  works already had a tight schedule and would not take place on event days, so an increase in the number of event days will obviously make an impact.

The Minutes of the Planning Commitee meeting of September, where the steps application was unanimously approved states:


Members heard that the steps were intended to be in place for 2020 when Brent would become the Borough of Culture and Wembley National Stadium would host European Nations League finals.

The works schedule is formidable:


The delivery of the project can be split into three main construction phases:


.        6.62  Phase 1 - The initial work activity will focus on clearing the site below and around the Pedway of those utilities and other items that will obstruct the Pedway demolition and subsequent staircase construction. As areas become clear, works to the foundations and substructure of the steps will commence.


•       6.63  The foundations to the steps will be constructed in and around the existing Pedway structure in advance of its demolition. Therefore, there will be a need to utilise small/specialist plant, such as restricted access piling rigs that will be able to access the low headroom areas beneath the existing Pedway to construct the piles.


•       6.64  Phase 2 - This phase will commence within an agreed window of time to minimise the impact to WNSL. The first stage of demolition will focus on removing the Pedway structure from the area of the new staircase construction. Once this is removed, the demolition will focus on removing the remainder of the Pedway (as it runs across Engineers Way towards Olympic Way and Wembley Park station north of the Stadium). A road closure of Engineers Way will be required whilst the Pedway is removed across the carriageway area (details as to the number and timeframes required for the road closures are not yet available but will be agreed, at the proper time, with the Council).


•       6.65  The construction of the staircase is anticipated to be a combination of pre-cast and cast in- situ concrete. It is anticipated that the bridge podium section that will connect to the Stadium will be cast in-situ and the staircase will be formed from precast structural elements. The staircase is of a modular construction and will follow a step by step process that will be prescribed by the designer and supplier. Throughout this phase of heavy lifting it may be necessary to have lane closure on Engineers Way to facilitate easy delivery and unloading of the precast elements. Pedestrian management will be a key feature of this phase to maintain safety exclusion zones around the works.


•       6.66  Phase 3 - The fit out of the staircase undercroft will commence as soon as all overhead working is complete and it is safe to do so. The final landscaping will be constructed during the WNSL events season. Ahead of this phase there will be agreed processes and access routes to limit the level of non-working and disrupted time (as has been managed through the delivery of the Olympic Way Zone A works).


•       6.67  The construction of the landscaping and public realm works will be undertaken in two sections that will run concurrently: Olympic Way (from the boundary of the Zone A works) to Engineers Way and the Olympic Steps area comprising land south of Engineers Way to the Stadium.