BE PREPARED FOR HUGE CHANGES: Universal Credit roll out starts in Brent on November 21st

Universal Credit, the controversial new integrated benefit system, is being rolled out in Brent. This is the Council' announcement:


The government's long-awaited Universal Credit is being rolled out in Brent from November 2018 on the following dates:
This means that residents with a change in circumstances or those moving into Brent making a claim for the first time will have to apply for Universal Credit instead of the benefits listed below:
The six benefits above will be merged into one single payment - Universal Credit. Unlike many of the existing benefits, Universal Credit will be paid once a month, rather than weekly, fortnightly or four weekly as housing benefit is traditionally paid, and will be paid directly into the claimant's bank account in arrears. This is a change for many residents who currently have their housing benefit paid direct to their landlord.

To make an application for Universal Credit, residents will need to apply directly to the Department for Work and Pensions via their website https://www.gov.uk/apply-universal-credit There is also a free helpline available for those that need any extra support: 0800 328 5644.

These are huge changes, particularly for residents who are already struggling to get by. The first port of call for formal advice is the DWP, who are implementing the changes. However, I want to remind residents that the council is here to help and you should contact us if you're worried that you might be falling into rent arrears or if you need support with your council tax.

This video tells you about the on-line process:

There is going to be a public information meeting about Universal Credit on November 23rd  at Chalkhill Community Centre: 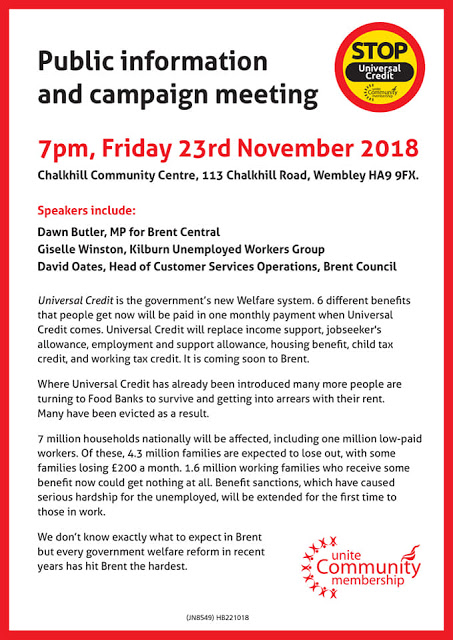 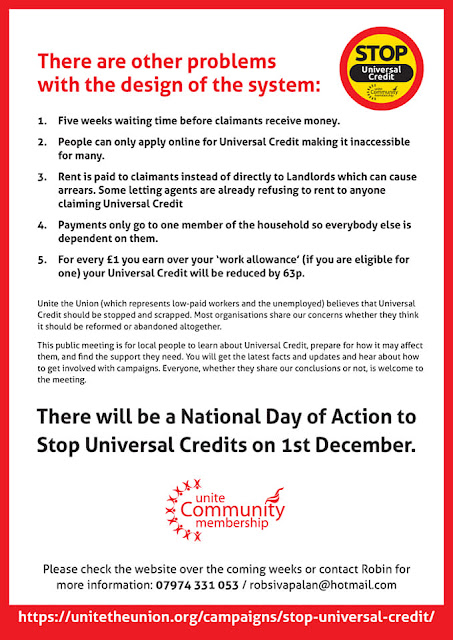 MEANWHILE I HAVE RECEIVED THE FOLLOWING VIA THE UCU (UNIVERSITY AND COLLEGE UNION) RETIRED MEMBERS BRANCH:

1. To date, of the 1 million households now on UC, the vast majority (except in local pilot areas), have been the unemployed. However that is about to change. From now on across the country all new or updated benefit claims (with a few exceptions) including those in work who receive Tax Credits have to be made through UC.

2.  DWP also plans to force everyone on benefits (including those on Working and Child Tax Credits) to claim UC even if there has been no change in their circumstances. DWP has refused to initiate transfers of Tax Credit claims on to a UC regime. Instead people have to initiate UC applications, a fraught and costly process. Testing forced transfers, called ‘managed migration’ by DWP, is due to start for some Tax Credit recipients in July 2019.

3.  Nationally, DWP’s plans mean 3 in 4 of the planned total of 7 million families on UC, would be in work. So of the estimated 16 million people nationally in families receiving UC, around 12 million would be in working families.

Background
4. This note outlines the Department of Work and Pensions’ (DWP) plans on UC as at early November 2018. These plans have changed many times. DWP has said they may change again if more problems with UC come to light.

5. UC has been criticised by welfare and other advice agencies after cases of severe hardship came to light and a series of analyses on the impact of UC especially after funding was cut. Arguably UC has become so discredited that what its future should be and indeed whether it should have a future is a matter for serious political debate.

Why have People found the UC Application Process so Fraught?

6. Firstly the forms are very lengthy – running to tens of pages. Secondly DWP want people to fill them in online. Even experienced advisers find the process; setting up accounts, locating and scanning in all the documents which DWP require to ‘verify’ a UC claim, often takes many hours, not counting verification visits to DWP offices.

The UC application process is most intimidating and unsuitable for those with poor language, writing or IT skills.

The process especially frightens those with mental health problems eg anxiety, as DWP’s own research shows.

8. Thirdly the risks, if things go wrong, have been largely put on to the applicant. Imposing on applicants financial penalties arising from the complex UC application process, is unreasonable given the widely known problems people have faced in completing UC applications to DWP’s satisfaction. Government November 2018 changes have reduced, but not removed, risks imposed on people when those on Tax Credits are forced to apply for UC.

9. If people do not successfully apply within 1 month of a DWP deadline they risk losing ‘Transitional Protection’ which protects, for a while, their money if UC pays less than they get with Tax Credits. Further DWP only allow UC claims to be backdated by one month – less than the 3 months allowed for backdating of some benefit claims.

Do Tax Credit Recipients lose Money?
10. First of all, UC claimants face gaps in payment imposed by DWP in two stages. The UC system builds in a gap in payments, reduced in the 2018 Budget to a minimum of 3 weeks, after applying for UC. On top of that gap 1 in 5 claimants have faced on average a 4 week delay by DWP (ie on top of the 3 week gap) in receiving some or all of their money. DWP do not expect the % facing additional delays in some UC payment to be reduced during 2018.

11. Indeed there may well a big rise in the current UC claim processing delays by DWP under the strain of a six-fold increase in the rate of new UC claims planned by DWP for 2020 plus the more complicated circumstances of future UC claims with working income and child care costs, (unlike the mainly simpler unemployed cases so far).

12. Secondly amounts paid under UC differ from what working families get on Tax Credits. Some would get more money under UC. But overall working families face a net loss on average of about £250 a year on UC, after the 2018 Budget measures notably the higher work allowances. The Budget reduced, but did not end the losses.

15. Tax and benefit measures in the 2018 Budget only partially offset the overall losses since Summer 2015 from for instance the benefit freeze. Overall tax and benefit changes reduce income just for the lower income groups.

Does UC Contribute to a More Hostile Environment for Workers?
16. As well as financial losses, UC can intrude into peoples’ lives. Under the UC regime, workers can be pressed by DWP to job search to increase hours or earnings. This is worse for some eg single parents with child care duties.

17. For the first time workers are now at risk of ‘sanctions’ – loss of benefit. UK has the 2nd most demanding set of ‘benefit conditionality’ terms out of 39 countries. Under UC sanctions are 4 times more frequent than pre-UC.

18. Insisting everyone has to apply for UC online is not user friendly, especially for those nervous of computers.

Is Universal Credit Actually Simpler?
19. One advantage claimed for UC is ‘simplification’ with 6 benefits rolled up into 1. The comparison is misleading: no one person ever receives all 6 benefits simultaneously. It is also partial: UC does not include some benefits.

The difficulty of making UC claims shows that any ‘simplification’ is not usually to the advantage of applicants.

20. Other aspects of ‘simplification’ may not help people. Paying UC as one payment may be convenient for DWP, but it means women will lose out when all money goes to one person, the higher earner, usually male. At the moment Child Tax Credit and the childcare element of Working Tax Credit typically go to the woman in a family.
Women with no direct access to money find it more difficult to leave when facing domestic abuse or violence.
Are there Other Benefits of UC?
21. DWP has claimed UC increases work incentives. That is so, but to a very limited extent. For the (1 in 3) people in work facing the highest effective tax rates they are cut from slightly over 90% to 85% with UC. The evidence is such incentives have little effect. Using sanctions implicitly admits that the work incentives are not effective.

22. DWP has argued that benefit take-up will rise under UC. But the user–unfriendly nature of UC, its toxic reputation and what an official report calls DWP’s ‘culture of indifference’, reduce the chances of higher take-up.

23. The DWP says that UC will reduce fraud and error. The NAO report refers to ‘a lack of evidence’ on this claim.

Conclusions
24. Government UC plans will increasingly affect people in work. Recent changes to UC have reduced the delays and the financial costs for workers, but not eliminated them. Reducing delays and more funding are not enough to make UC suitable. It is very user-unfriendly and intrudes oppressively into peoples’ lives. A harsh UC regime drives people into taking unsatisfactory work, putting downward pressure on work T&Cs – a core union concern.

25. There is a very strong case for Trade Unions to call on political parties to back ‘Stop and Scrap UC’ and, so long as UC continues, urging councils to minimise the impacts. Some Boroughs have set up information, advice and advocacy services eg Tower Hamlets, and others have committed to not evict tenants in arrears as a result of UC.

26. Pushing more people on to UC should be immediately halted, whilst a fundamental review considers the options.