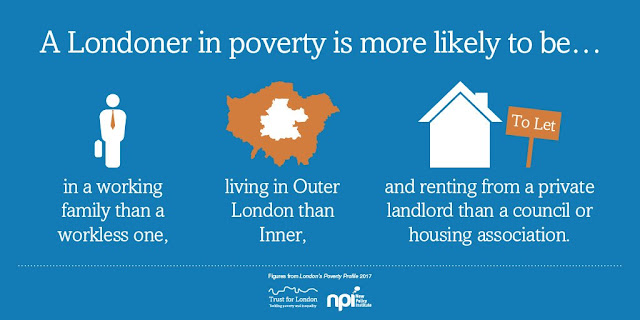 Time is set aside at each council meeting for a non-cabinet member debate. Tomorrow Cllr Fleur Donnelly-Jackson, Willesden Green ward.

One area missing is the high-end purpose built private rented sector such as those built by Quintain in Wembley under the Tipi name.  There aside from rent the service charges have become an issue (see ) and renters have found also themselves trapped into contracts with utility and broad-band suppliers. As these contracts are negotiated for all  residents by the property management company, people cannot search our cheaper suppliers.

Private Rented Housing Sector
This Council notes: The important work carried out by the Private Housing Enforcement team:
·      Brent has an estimated 36,000 privately rented properties. The Private Housing Enforcement team carry out between 30-40 planned inspections per week, plus an additional 10-15 unannounced inspection raids.
·      Brent Council has won 140 landmark prosecution cases against rogue landlords, agents and sub-letters since 2016. The convictions have resulted in more than £1.1m in court fines and costs.
·      A total of 901 PRS Properties have been improved as a consequence of their interventions, since January 2018.
·      Brent Council is registered with, and a member of the Housing Ombudsman Service. We also contribute to the renters’ advice service: Advice 4 Renters, and enforcement officers give A4R’s advice leaflets to tenants when they visit. They also signpost tenants to A4R’s website, or SSP Law (solicitor firm contracted by Brent Council to advise tenants).

This despite the Council operating against a backdrop of prolonged austerity. We therefore also note :
·      The average price paid for property in Brent in the last year stands at nearly half a million pounds. Consequently it is no small wonder that the proportion of people renting privately has doubled since 2004; half of 18-35s, 1 in 4 families with children, and growing numbers of older people now live in privately rented homes [1].
·      That most of England’s 11 million renters are on tenancies with fixed terms of six months or a year; after this period has ended, landlords can evict their tenants with just two months’ notice, without giving them a reason. These ‘no fault evictions’ were introduced under Section 21 of the 1988 Housing Act; before this, renters had much greater security and it was difficult for landlords to evict tenants who paid the rent on time and looked after the property.
·      Evictions are the number one cause of homelessness with 80% of evictions on no-fault grounds, and 63% of private renters who were forced to move in 2016 evicted not due to any fault of their own but because the landlord wanted to sell or use the property [2,3,4].
·      The recent Guardian and ITV investigation into rogue landlords operating in Brent, and note how a number of these criminals wilfully exploit loopholes within existing legislation.
·      The London Mayor’s online “rogue landlord checker” is available to all Londoners and has received more than 1,000 entries from local authorities.
·      That Karen Buck MP’s private members bill on “Homes (fitness for human habitation)”, which seeks to require that residential rented accommodation is provided and maintained in a state of fitness for human habitation. We also welcome the progress of the tenants’ fees bill through Parliament.

·      That housing is intrinsically linked to poverty and life chances. Children need secure homes from which to excel in their schooling. Adults need a secure home in order to work, flourish, and take part in society to their fullest potential.
·      The Government has been forced into a U-turn after a Guardian and ITV News investigation revealed that not a single name had been entered into the government’s new rogue landlord database system in more than six months since its launch – and that even when landlords’ names were listed, the public would not be allowed to see them. [5]
·      Landlord licensing is not fit for purpose until universally implemented, and the problem of rogue landlords is far-reaching beyond borough boundaries. We need an effective scheme, local authorities that are properly resourced and improved tenants’ rights. A national regulatory framework would ensure consistent regulation for all landlords across the country and stop the rogues from switching local authorities.
·      To fix this broken system, we need a complete rebalancing of the power relationship between landlords and tenants. The underlying issues of the housing crisis will only be solved by the construction of social and genuinely affordable housing on an unprecedented scale, with legislative teeth to punish rogue landlords.
·      Mass homelessness is a national disgrace, and removing its leading causes should be a priority.
·      Alongside tackling homelessness, abolishing Section 21 no-fault evictions would help to make renting more secure, improve standards, increase tenant confidence and ultimately contribute towards making renting a viable long-term alternative to home ownership or social rent for the millions who currently cannot access either.
·      Renters Unions would make it easier for tenants to defend their rights, and for existing unions like the London Renters Union to defend their members

This Council resolves:
·      To support the abolition of Section 21 no fault evictions.
·      To note that the Council will continue to serve improvement notices and emergency remedial  action notices on landlords where private rented homes fail physical inspection, which can  restrict the scope of private landlords to serve retaliatory section 21 notices.
·      To call for the tightening of legislation so landlords can’t use property agents to hop from  borough to borough.
·      To support new renters’ unions to allow renters to organise and defend their rights, and to  make the housing market fairer.

[1] English Housing Survey 2016-17
[2] ‘Record numbers left homeless after eviction by private landlords in England’, The Guardian, 28.9.16
[3] ‘How eviction leads to homelessness: “My youngest child doesn’t know what a home is”’, The Guardian, 8.1.18
[4] ‘The state of private renting’, Inside Housing, 2.8.17
[5] https://www.theguardian.com/business/2018/oct/24/government-policing-of-rogue-landlords-labelled-pathetic
[6] https://www.london.gov.uk/rogue-landlord-checker