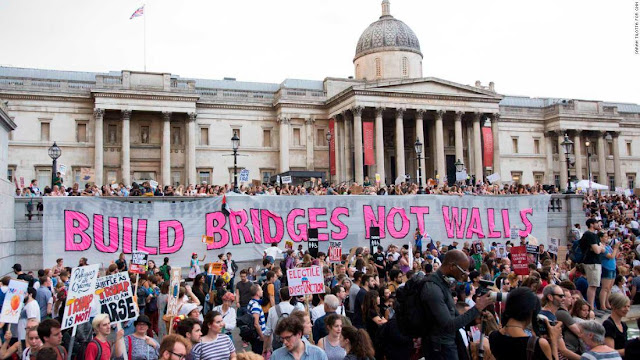 I bumped into an assortment of left-groups, including the Communist Party of Britain Marxist-Leninist, Socialist Party, Community Party of Great Britain and Counterfire on Thursday evening as I was leaving an NEU Climate Working Group at the NEU headquarters.

They were attended a meeting about a 'People's Brexit' aimed at making a socialist case for leaving the EU. 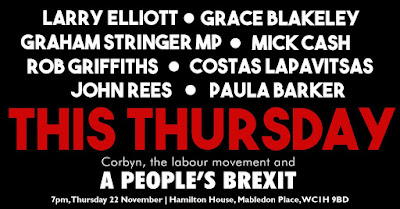 I picked up a CPBML leaflet which said:

Let’s return to the simplicity of our  [referendum] decision. Reinstate the red lines for Brexit. Control over our economy, our borders, our agriculture and fisheries, our food, our laws, our workplaces. That would terrify the EU would-be masters. Only then can real negotiations begin - from the true position of British strength.

Last night in Brent  at Bridge Park there was a meeting, publicised by local Liberal Democrats, with a speaker from the People's Vote campaign aimed at organising Brent residents in favour of a People's Vote on Brexit.

Both camps have some strange bedfellows.

Today I received this from 'Another Europe is Possible'. I don't think for a minute that everyone who favours Brexit is a racist, let alone a fascist, but it is proving a vehicle for some opportunists:


On December 9th, the day before parliament votes on Theresa May’s deal, the far right will march on London under the banner of “Brexit Betrayal”. We will mobilise, in massive numbers, to combat their message of hate and division. And we will demand a serious alternative: a society that works for everyone, and a final say for the people on Brexit.

Join us on December 9th - stand up to the far right

In the face of this moment, it is not enough to simply oppose racism in the abstract. Brexit is being used to attack migrants, end free movement, deregulate the economy, divide communities and legitimise racism in the political mainstream. It is driven at its core by the British wing of a movement that includes Donald Trump, Jair Bolsonaro, Marine Le Pen and Geert Wilders, among others.

Tommy Robinson is not just using Brexit as a tool to attract followers. Brexit has from its earliest days been driven by the far right, and the far right will benefit from it for decades to come unless we defeat it and the conditions on which it feeds.
The far right is growing because the economic and political system has failed us. We need decent homes and jobs, we need a transformation of the economy that gives people control over their destinies.

Come together against Brexit and the far right

The far right is growing because the economic and political system has failed us. We need decent homes and jobs, we need a transformation of the economy that gives people control over their destinies.

On December 9th, we will rally in Parliament Square. Join us to demand:

Please understand your neighbours and do not dehumanise them by labelling them 'far-right'. They are your neighbours. There are 17.4 million of them (and far, far more of them voted to leave (over 1.3 million was the margin) than voted to stay). That's because they studied the history of the EU, rather than buying into its propaganda. They are not xenophobic or under-educated (yes even the ones that might actually march). In fact they might even be more educated than you. Have at least a little humility, and examine the actual facts before leaping to the conclusions which suit your feelings. Throwing around words like 'hater' and 'far-right' is no longer working. You need to make coherent arguments as to why we should remain in an institution whose most influential members openly aspire to totalitarianism and who also have the ears of impressionable PPE students. Now that IS serious extremism worth marching about.