The London Welsh School, currently housed in a building close to Stonebridge Primary School, is looking for new premises due to the proposed expansion of that school.

Stonebridge Adventure Playground, as readers know, is fighting its proposed closure as a result of the Stonebridge School expansion as well as Council proposals to end its funding.

The Welsh School (Ysgol Gymraeg Llundain), a registered charity, is a bilingual primary school of currently around 30 pupils. Wembley Matters visited the school when it was first threatened in 2013.
LINK

It had its second application  to become a free school turned down by the DfE earlier this year. LINK


After an exhaustive search the Welsh School governors and parents see the only option as building in the currently disused Bowling Green in King Edward VII Park, in Park Lane Wembley. 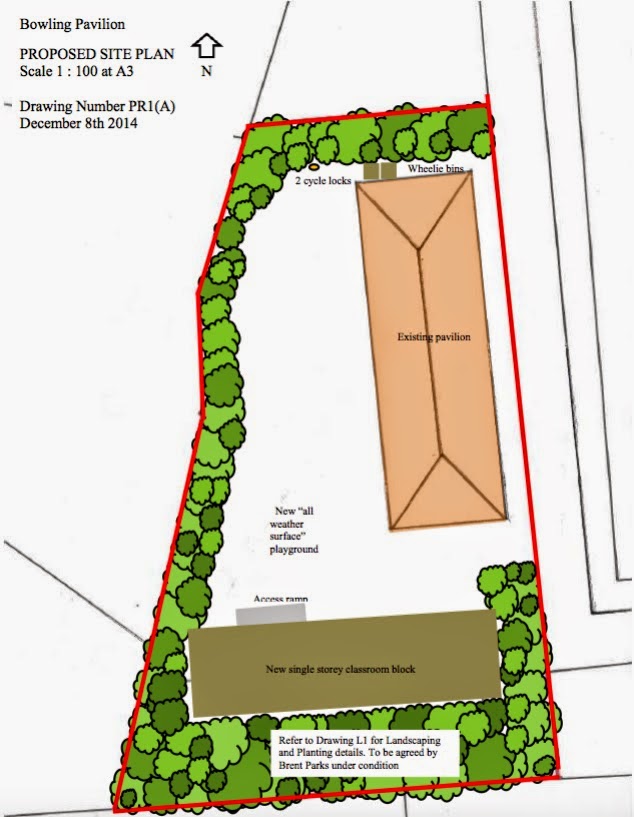 The plans are for a new building between the pavilion and the bordering back gardens in Princes Court. Some of the residents have objected on grounds of noise, additional traffic and loss of parkland. The Pavilion would also form part of the school with a possible dual use for the Freinds of King Edward VII Park.

The new building planned would be single storey and the Welsh School, following objections, has moved the building 4 metres away from the garden boundary which will be planted with dense shrubbery and trees. They have also agreed to retain a large Norway Maple and other specimens on the site but the revised planting shows the removal of  3 Irish Yew trees and 1 Monterey cypress. They are identified as category B trees which I believe are trees identified as of moderate quality or value capable of making a significant contribution to an area for 20 years or more.


The proposed land swap to make up for the loss of public park space is perhaps the most
controversial part of the proposal. The proposed land is next to Collins Lodge, which is currently temporarily occupied to safeguard the building. Some park users claim that the land, currently registered as residential, is already part of the park, at least visually, as it is a lawned area surrounded by low railings. The removal of the railings would be all that was required to make it formally part of the park.


Arguing that this is not a sufficient land swap to make up for the loss, attention has shifted to land on the other side of Collins Lodge which was previously used for storage and maintenance but now, as can be seen from the photograph, in a very sorry state.

It is an eye sore that would improve the park considerably if it was reclaimed as parkland.


Others have suggested that this could be a better site for the proposed school building.

Another issue that the Planning Committee would need to consider is vehicle access to the proposed new building. There have been problems in the past, including collapsed drains,  with access to Park Lane Primary School, which is closer to Park Lane itself but where vehicles have to access the school through the path into the park.The park gates are locked at night.


Access to the proposed Welsh School would be through the same gate but would carry on through the park on what is little more than a footpath.

Large delivery vehicles, waste collection vehicles and emergency vehicles would all have to access the school along the path which is used by pedestrians  including children and their families enjoying the park.

Clearly there is a safety issue here and the path itself may need to be reinforced and perhaps widened affecting the amenity value of the park.

The full details of the planning application can be found HERE


The Planning Committee will visit the site about 9.35am on Saturday January 10th and the application will be decided by the Committee on Tuesday January 13th, 7pm, Brent Civic Centre.
Posted by Martin Francis at 11:09:00 62 comments:

Can I take this opportunity to thank everyone who has contributed to this blog as Guest Bloggers, commenters and readers as well as those who have supplied information by email, phone and post.

I hope that in 2015 we can get ride of the Coalition and start reclaiming our public services and dedicate them to the common good.

It is imperative that we lift up our eyes and recognise that we must redouble our efforts to persuade the international community and its politicians to tackle the climate crisis.
Posted by Martin Francis at 17:47:00 5 comments:

How will Brent community library campaigns fare in 2015?

As the year draws near its end let's see what the state of play is with the various library campaigns in the borough. These were set up after Brent Council closed 6 of its 12 libraries.

Two libraries,  Neasden and Tokyngton, are now gone for good, but the four others are being supported by community campaigns. This is the current state of play (information from the campaigns' blogs, Facebook pages etc).


The campaign is optimistic that it will have a space in the new development but has a wary eye on events at Kensal Rise:

On 12th November Brent Planning Committee approved the application to demolish the building that has served as Cricklewood Library since the 1920s, and build a new mixed use development. The new four storey development will have a community space on the ground floor, sharing the building with six flats.

Friends of Cricklewood Library have been named as tenants of the community space, pending legal agreements, and we intend to run a library service, making the most of using the space by making sure it is adaptable and can be rented out to community groups for activities. We’ve got exciting plans/ideas, and a strong team – and there is a lot of talent and energy in the community to draw on.

A big thank you to everyone who has supported the campaign to keep our local library. There is a lot of work to do – but what wonderful chance to run a library/community centre and keep it right here. Please let us know if you would like to be involved – get in touch by email

Regular readers will know about recent events which saw the building go up for auction and then fail to reach its reserve price. The update on the campaign blog states:

We understand that you may be confused and concerned by the latest turn of events – the auction of the library.

The library building may or may not have a new owner.

The focus of the Friends of Kensal Rise Library has always been, and will continue to be, to work for the establishment of a library in the Kensal Rise Library building. We remain focused on this intention and our resolve is strengthened by the on-going support of the Kensal Rise/Kensal Green community - we are gratified by the trust the community places in us and are heartened by the many messages of support we continue to receive.

We received a letter on the 16th December from All Souls College, who, by the terms of their sale to Andrew Gillick, retain control of the D1 community space, whoever is the owner of the building.

Any subsequent owner of the freehold of the library inherits this obligation regarding the D1 space. 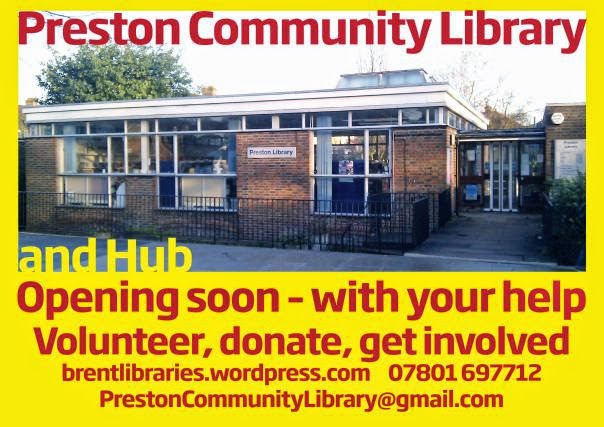 The campaign hopes to be able to run a community library from the old building when it is no longer needed as a temporary annex to Preston Park Primary School.  They hope this will be in Spring 2015 when building work at the school is completed.  During the May local elections Cllr Roxanne Mashari pledged the building at a peppercorn rent to any 'local community group who can provide a sustainable community library.':


We will not open to competitive tender in order to give preference to local groups if they can demonstrate health and safety sustainability etc. and we will offer help and assistance through Brent CVS the voluntary sector and continued support and networking through the Brent libraries forum which has proved successful for the likes of the Friends of Kensal Rise.

The campaign is now asking for more volunteers, donations from local business etc LINK
It has already been using the building out of school hours as a community hub.

This campaign has run temporary libraries in Wembley High Road and at Sudbury Town station. but wants to move back into Barham Park Card Room (above) that has remained empty for some time,
The Council in October 2013 had plans to turn it into a cafe on a similar basis to the one in Roundwood Park but nothing has happened since and the building, donated to the public by Titus Barham remains unused and subject to deterioration.

Friends of Barham Library have said that  they are willing to offer refreshments to the public using the park if they run a community library from the building.

Cllr Michael Pavey has now become Chair of the Barham Trust and there has been a further delay as they review the governance of the Trust.  In response to a letter from Francis Henry, Property Manager for Friends of Barham Library, he said:


I reiterate what I have said previously: I have absolute biases (I suspect this should be 'no biases' MF) on this issue. I have not been involved in any of these campaigns. My sole interest is to try and use my role to ensure that future generations can enjoy a beautiful Barham Park.

From Michael Mansfield QC
In 2012 the government consulted on proposals to make significant changes to the healthcare economy of North-West London, set out under the heading “Shaping a Healthier Future”. This involved the downgrading of several hospitals across North- West London to “local” hospitals without A&E provision, closure of acute provision and reduction or downgrading of specific services. It also promised commitments to investment in capacity of out-of-hospital and community services in order to offset reductions in acute provision.
Two years into implementation of “Shaping a Healthier Future”, Brent, Ealing, Hammersmith & Fulham and Hounslow Councils are keen to review its implementation; in particular, the impact of reductions to acute provision on the North West London population, the extent of progress with investment in capacity and capability of community and out-of-hospital services to meet local needs, and the extent to which demand for acute services has changed as a result of those investments.
The North West London Healthcare Commission was launched on 1 December 2014 by the four councils to review the impact of the changes to the North West London health economy, arising from the implementation of “Shaping a Healthier Future”, and to assess the likely impact of planned future changes. I have been appointed to chair the Commission and my fellow Commissioners are Dr John Lister and Dr Stephen Hirst.
In order to assist us in the task of reviewing the implemented and planned changes, I invite you to submit written evidence that may assist the Commission in its consideration of the impact of these changes on patient care in the area. Any such written evidence should be submitted by Monday 2 February 2015 to Peter Smith, Clerk to the Commission, at Hammersmith & Fulham Council. Submissions should be addressed to him at Room 39, Hammersmith Town Hall, London W6 9JU or sent by email to peter.smith@lbhf.gov.uk. Later submissions will be forwarded to the Commission but may not be given the same attention as those received by the deadline.
I look forward to reading any submission you may wish to make. Yours faithfully
Michael Mansfield QC , Chair, North West London Healthcare Commission
Posted by Martin Francis at 10:52:00 2 comments: 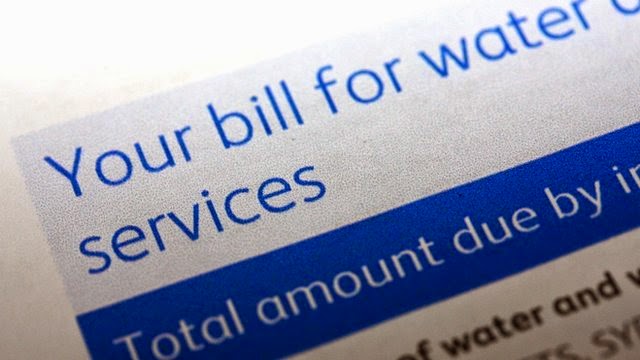