This is published with the permission of the author who outlined the impact of the recent Tottenham match.  First published the website NextDoor:

This morning after Sunday's event I got my picker stick out, didn't need a carrier bag as one had thoughtfully been left in my hedge and started picking up the rubbish left by yesterdays fans. I had 3 beer cans, three coffee cups, Lucozade bottle, 2 cigarette packets, a half eaten sandwich, half a kebab left in it's box and a half filled plastic beer mug.

All this was strewn alongside my hedge or in my front garden. I also had a large black plastic bag half filled with beer cans left on the corner of my property, which I suppose is better than being left individually. So from 2 events in one week I've collected two carrier bags full of rubbish and a black plastic bag full of beer cans. Living on a corner I've collected all this just from the front and alongside my property. And this is only outside one house a stone's throw away from the stadium. So much for Brent's extra rubbish collections on event days!

PS I don't get this usually from American football fans or concert goers, only football supporters.

PPS No I don't dislike football, I support a club, it's just football attracts the worst fans and sadly it's football fans that are going to be coming to all these extra events.

Maybe if this is going to be the norm I should ask Brent Council to supply me with plastic bags.

Responding to jibes from Brent Council leader Muhammed Butt about the two Conservative groups on the Council and which one was the true Conservative, Cllr Kansagra, deputy leader of the Conservative Group, admitted that the public and councillors were 'fed up' with the existence of two groups and the extra time and resources this took up.

He said that councillors and the public might be pleased to hear that there were proposals in the pipeline that there may be one Conservative Group in the future. Turning to Labour councillors he said, 'You will be happy with this - we will tolerate it!'

The Conservative Group currently has four members and the Brent Conservatie Group two members. Labour has 56 councillors and there is one Independent.

However it appears things are not that straightforward. Responding to a query from me earlier today, Cllr Warren said: 'That statement from Cllr Kansagra was as much a surpise to me as it was to you!'

He went on, 'Politics is very unpredictable....but as of today nothing has been put forward to me about mergers.'

A merger would makes things more straighforward for the Conservatives when it comes to selecting candidates for the 2018 local  election.

Dodgy goings on with Spurs application to increase events & capacity at Wembley Stadium?

Residents have been in contact about two aspects of the on-line consulation on removal of the cap on the number of events held at Wembley Stadium and more full capacity events LINK.

The first is the fact that on at least two occasions the link has been unavailable clearly affecting the public's ability to comment.

The second is puzzlement that submissions by the public that clearly object to the proposal are classifed as 'Neutral' - see below:

Please see comments below one of which suggest that if you do not choose Support, Object, or Neutral when submitting a comment online the system defaults to Neutral to the Neutral category. If this has happened to your comment it might be worth contacting the Planning Officer to state your position.

I strongly object to the proposals. It would add to the traffic gridlocks, sometimes hooting of horns late in the evening - not to mention increased air pollution! And difficulty using public transport. Also, residents having the nuisance of having to plan theirs lives around the events. The behaviour of hooligans is also unbearable - I came home once to find a brick had been thrown through my bathroom window! A small tree got broken in half once on an event day - and then there is urinating everywhere. And parking becomes impossible of corse. - As the stadium is a national stadium it should not be used for anything else. - I therefore strongly object to the variation of condition 3 and the removal of condition 33 of 17/0368.

I strongly object to this and don't think residents have been taken into consideration here.

Roads are already highly congested and Brent should be thinking about minimizing this instead of making matters worse. Whether I drive or take public transport on an event day my journey time is doubled sometimes tripled. I am unable therefore to travel within the local vicinity on event days.

Looking at other comments it is clear there is strong opposition, so it is hoped you take these concerns into consideration and think again of the impact this will have to residents, roads, traffic and the environment.

We live and work very near to Stanmore and Cannons Park Underground Station, the A41 and the M1 Edgware exit. Whenever there is any event on at Wembley Stadium, the whole area grinds to a halt. The roads become impassable and journeys around this area almost impossible. There is just not enough space for the amount of cars on the road to travel or the availability of parking places. Together with the noise and nuisance levels of hundreds of various football or rugby fans, the request for additional events is unacceptable for the residents living anywhere near Stanmore or Cannons Park Underground stations or the M1/A41 or A1. If there are visiting fans from the North of England, then the additional traffic on the M1 turns the area to one large car park - absolutely nothing moves and a 10 minute journey can turn into an hour.

We already have to contend with additional traffic and congestion when there are any events on at Allianz Park in Copthall Stadium Mill Hill and any events at The Hive in Edgware.

Therefore we strongly object to any additional usage of Wembley Stadium and to any football club having their games held there or having a residency there.

'Condition 3' was put in place for a reason - to prevent local residents from suffering the great disruption and inconveniences caused to local residents when up to 91,000 people descend on Wembley Stadium. Yet it is now proposed that an extra 31 such events are allowed to take place. And not just any events, but football matches, with their supporters, some of whom have a tendency towards rowdiness, drunkenness and anti-social behaviour.

WNSL has tried to say that it will try to mitigate any problems by 'working closely' with TfL and the Met Police etc. But with a large football crowd those problems can only be 'managed' not removed completely. On match days, residents will still have problems getting home (or leaving it) by train or car, problems picking up their children from school, problems accessing the Civic Centre, or be unable to have friends round.

I therefore object to this application. At the very least, THFC matches should be restricted to 50,000 seats. After all, their existing stadium only accommodates 36,800 and their new one will only be a 61,000 seater.

I also feel that by allowing this application for THFC to use the Stadium, a precedent will have been set that will allow future applications to be 'nodded through'.

I feel that the application is not pragmatic to the overall functions of Wembley. I believe that the current situation is bad enough and does not need to be exacerbated any further. There is enough congestion in Wembley on event days. We as residents of Wembley do not feel any benefit from the stadium events. We feel that we are made to surrender our parking spaces to people who do not live in Wembley. We cannot have visitors around because of the congestion. Life in Wembley is already bordering on depressing. Please do not make it worse. I strongly object!

This area is already very busy and too much traffic.

The meeting is at 7pm at Brent Civic Centre
Posted by Martin Francis at 11:01:00 1 comment:

Brent Council to debate US travel ban this evening

A cross party motion on the US travel ban is to be debated at tonight's meeting of full Council. The motion reads:

This Council unanimously condemns recent unjustified and inhumane efforts by President Donald Trump to ban the men, women and children of predominantly Muslim countries from entering the United States, and objects in the strongest terms to the principle of any nation imposing arbitrary, discriminatory travel bans.

This Council holds that racism and xenophobia, for which there can be no place in civilised society, be challenged at every turn, and that the politics of hate and fear must always be robustly confronted and comprehensively rejected.

This Council draws attention to the recent commemoration of Holocaust and Genocide Memorial Day and implores President Trump to heed urgent warnings against allowing the catastrophic mistakes of our collective past to be repeated.

This Council celebrates our borough’s proud diversity and is testament to the immense and invaluable contribution afforded by the universal human right of global migration.

While recognising the need to prioritise national security, this Council calls on the UK government to continuing setting an international example of enlightened compassion, ensuring that our words are more than matched by our actions via a guarantee that this country will always be as much a place of sanctuary as it is a land of opportunity. 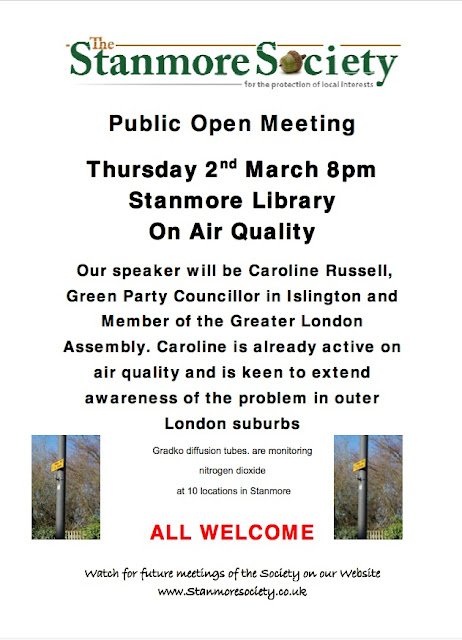 From West London Stand Up to Racism

West London Stand Up to Racism have organised a Public Meeting in Ealing on Tuesday 28 February at 7.30pm with a fantastic line up of speakers.

We have a stall at this meeting.

WEST LONDON STANDS UP TO RACISM

A North Brent Residents Assocation and Parks  Group Forum was set up this week to further cause of making London a National Park City. The move has been supported by ward councllors in Barnhill, Northwick Park, Kenton and Kensal Green with John Billam Tenterden Parks and Neighbourhood Group taking the lead.  The initiative has been supported by Cllr Southwood, lead member for the environment. More endorsements by wards councillors are required to set up London as a National Park City.  It requires all councillors in a ward to support the application.