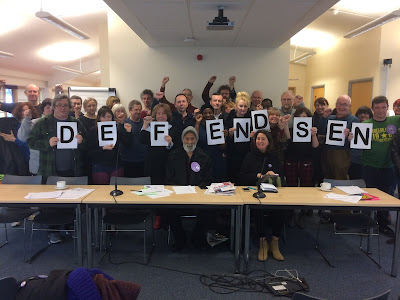 The London Region of the UCU passed a motion of Indro Sen and the CNWL union branch at their meeting on Saturday. Indro Sen, UCU representative,  is currently suspended by the College of North west London. A meeting to express solidarity will be held at Willesden Library at 6pm on February 24th with an open invitationto students, parents, trade unionists and community activists.

London Region sends it solidarity to Sen and the Branch in their campaign against victimisation.

The LR resolves to:

2) Encourage branches to support a day of action in support of Sen on the next day of strike action. Eg taking solidarity selfies.

3) Encourage members to attend the public meeting on 24 February in support of Sen.

4) Request that Sen’s campaign is publicised through UCU's national networks including Campaign news.