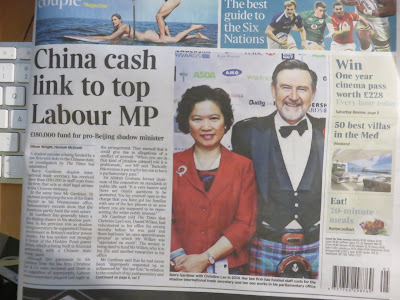 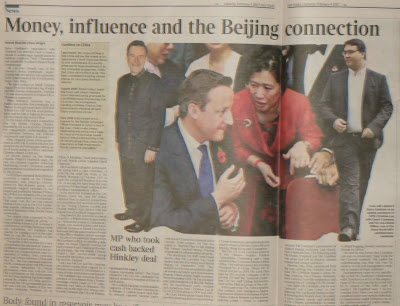 Barry Gardiner Labour MP for Brent North is honoured today with a front page splash, double page inside splash and an editorial in the Times newspaper.

The story claims that Gardiner, currently Shadow International Trade Secretary has received more than £180,000 in staff costs from the law firm Christine Lee and Co that acts as chief legal adviser to the Chinese embassy.

Further it is claimed that this partly funds the salary of Lee's son who works in Gardiner's Westminster Office.

The Times draws attention to Gardiner's championing of Chinese involvement in the Hinckley Point nuclear project.  Clearly that is also sensitive to his previous role as Shadow Energy and Climate Change minister as well as his current international trade post.

In its editorial entitled Beijing Bling the Times says:


If the commercial relationship and Mr Gardiner's positions on China were merely coincidental, it betrays not venality so much as naivety.  China has repeatedly demonstrated its appetite for overt interference in the domestic affairs of other countries in order to further its commercial interests and buttress its ambition for global superpower status. Its world-beating credential in cyberespionage and penchant for intellectual property theft are well-established.

This blog has in the past been critical of Gardiner's close relationship with Indian Prime Minister Narendra Modi LINK  and clearly in his current role as shadow international trade secretary he has to be very careful to avoid any accusations of bias.

On the other hand devoting all this space to a story which the Times itself admits includes 'no suggestion of impropriety' may be part of the anti-Corbyn strategy of the Murdoch press. Gardiner is the only survivor of the three Brent MPs who were in Corbyn's shadow team until the Article 50 vote and several other shadow ministers have resigned or may face sacking as a result of the rebellion. Adding to that turmoil the forced resignation or sacking of a Corbyn loyalist, who has recently received some plaudits for his media appearances, may be the intention.

Today Gardiner placed this statement on his website LINK:


“Christine Lee & Co have generously supported my work as a Member of Parliament over many years since we first worked together to fight against plans to redevelop Oriental City and the loss of homes, livelihoods and community ties in Brent. The firm has enabled me to appoint a strong research support team to hold the government to account. This has always been transparently and appropriately recorded in the register of members’ interests. The Times article has revealed nothing that was not already in the public domain and they themselves admit that the secondment of staff was properly declared and state that “there is no suggestion of impropriety”.

We are likely to know tomorrow whether a complaint to the parliamentary standards commissioner, Kathryn Hudson, will result in an investogation.

The Times's comment about the evils of the Chinese government seems very accurate to me. Especially if you make a little amendment to the first few words:
'News Corporation (News Corp), owned by Australian-born American Rupert Murdoch, has repeatedly demonstrated its appetite for overt interference in the domestic affairs of other countries in order to further its commercial interests and buttress its ambition for global media superpower status. Its world-beating credential in cyberespionage and penchant for intellectual property theft are well-established.'

Wow, For over 20 years, Christine Lee & Co has been and continues to remain one of the most dynamic leading law firms in the area of immigration law.

Barry's wife Caroline Smith works for him as an Immigration caseworker coincidence??
https://www.easterneye.eu/news/detail/poet-caroline-smith-reveals-the-experiences-of-asylum-seekers-and-refugees

Read about Barry's work when he was Chairman All Parliamentary Group on UK-India trade and investment.

Shailesh Vara, shadow deputy leader of the Commons and one of the Conservatives’ rising stars, quit the All Party Parliamentary Group on trade and investment with India last week.
http://www.express.co.uk/news/uk/87026/MP-forced-to-quit-over-conflict-of-interests

My account of public meeting where Gardiner sought to answer his critics: http://wembleymatters.blogspot.com/2009/06/gardiner-faces-his-critics.html

Oh,come on, Barry! You may have declared the "donations" you received from Ms Lee's firm in the register of Members' interests, but the standards of conduct in public life require that:-

'... you should not place yourself in situations where your integrity may be questioned, should not behave improperly and should on all occasions avoid the appearance of such behaviour.'

Ms Lee's firm acts as a legal adviser to the Chinese Embassy / Barry Gardiner MP (recipient of £180k in staff costs from that firm) was a strong supporter of Chinese involvement in the Hinkley Point nuclear power station project. Is that not placing yourself in a situation where your integrity may be questioned?

One of the staff funded by the £180k from Ms Lee's firm was Ms Lee's son, who worked in Barry Gardiner MP's Westminster Office, so presumably has a "pass" enabling him to access parts of Parliament not generally open to the public.

Given Ms Lee's links with the Chinese Embassy, does that not pose a security risk, and again raise doubts over whether our MP has put himself in a situation where his integrity, the appearance of his behaviour, and his judgement, could be called into question?

You must admit he's got lots of friends, Barry Gardiner: Friends of India (pop. 1.2 billion), Friends of Israel (pop. 8 million, and expanding), obviously lots of friends in China (pop 1.4 billion). I think the greatest blot on his reputation, though, is his recorded use of the expression 'UK plc'.

Bring back Rhodes Boyson I say.

Hard at work in... Mexico: Miliband's flood supremo basks in 29C on sun-kissed jolly as Britons count the cost of the deluge

Mr Gardiner and his wife Caroline enjoyed a stay at the Cancun's luxury Moon Palace Resort - and the bill came to £3,650

'Read more' from a Daily Mail site? You kidding? If I was in charge of rehabilitating someone's reputation, quoting Dacre/Letts/Sarah Vine/ Littlejohn attacks on him would look like a good move. I don't think that that's what you're doing, Anonymous 20.17, but if you think that citing Dacre's jaundiced crap will persuade anyone here of anything, you maybe have misjudged your venue and your audience.

GG2 Leadership Award 2016. The company prints his calendars and Directors live in North Wembley in his constituency.