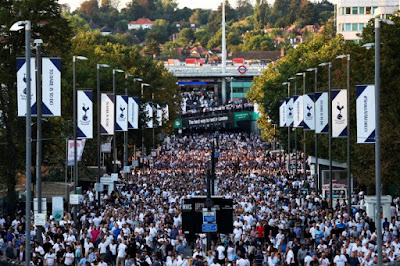 A petition has been launched asking Brent Council to reconsider the use of Wembley Stadium for Spurs and Chelsea home games. (The FA/Spurs are presently consulting on this See LINK)

The petition is HERE and wording below:

Wembley National Stadiium is a stadium of national importance and as such is designated for matches organised by the Football Association for matches of national importance and also for finals of league cups etc. These matches are very frequent in the spring and summer each year. The residents around the area understand and accept this use of Wembley Stadium for such matches.

The use of the Wembley National Stadium for club matches for the above mentioned clubs mean that for then next few years at least 30 additional matches will be played in the Wembley Stadium for the above mentioned clubs. This will put extreme pressure on public services around the Wembley Stadium area. The roads will be blocked due to the excessive traffic. Access to schools and post school activities for children will be hampered. Elderly people will be especially at risk due to the huge amount of traffic around the stadium area. The traffic will also put emergency access at risk the roads will be absolutely blocked.

As a national stadium, these club level matches are not acceptable.