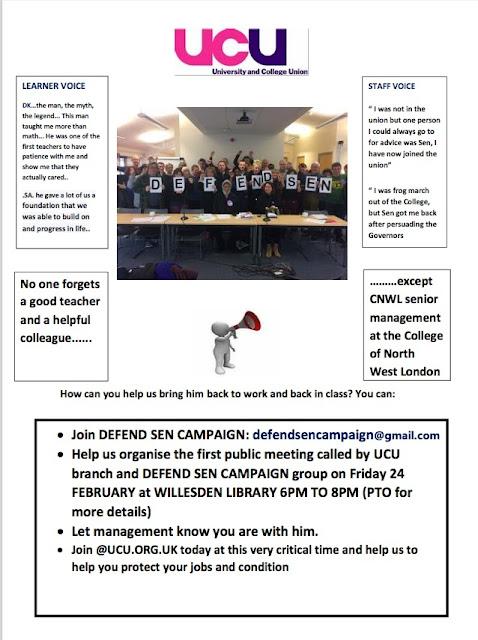 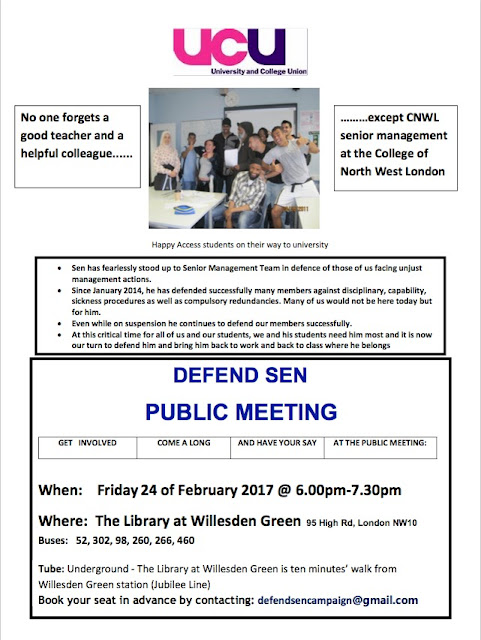 We would like to invite you all to public meeting organised by DEFENSENCAMPAIGN and against trade union victimisation of Sen, a life long committed maths teacher and a trade union activist. This is not the first time this has happened. The public meeting follows the second strike action taken by his branch in protest at his continued suspension. The platform also includes Grunwick40 and hopes to connect the past with the present. Sen led a number of campaigns and strikes in the College situated near what used to be the site of Grunwick.

Sen was suspended for representing two ex- colleague support staff members sacked by the College at an employment tribunal, who could not afford to hire costly barristers. The allegation is that he took unauthorised leave. His union believes that this was a pretext to get rid of him. One of the sacked member is of Afro Caribbean origin and the other member he was representing suffers from five set of disabilities. The College had never refused him unpaid leave before but did so this time.

Sen led a very suscessful campaign resulting in stopping a merger taking place between City of Westminster College and his College in 2013, the only College to have fought of a merger trough joint union action. Following his suspension on the 10 October 2016, the two College again took a decision to merge.  He remains suspended and decision with regards to his continued employment will come out on the 24 February or soon thereafter. Your intervention through appearance at the Public meeting or public support may have a significant impact on the decision.

Even whilst suspended, he has satisfactorily concluded a number of cases involving his members to their satisfaction.