The Institute of Fiscal Studies Report on apprenticeships LINK raised a number of key issues: I draw particular attention to the highlighted issue of concern to us in Brent over the College of North West London alleged fraud by a subcontractor which led to 78 students missing out due to a non-existent course LINK:
I can reveal that the company involved in the alleged apprenticeship scheme fraud at the College of North West London was  Keyrail Training Ltd/Keyrail Training Solutions Ltd, an Approved Apprenticeship Training Agency listed at the Skills Funding Agency.

Interestingly this notice was posted on the Companies House site revealing that it was dissolved in May 2016. 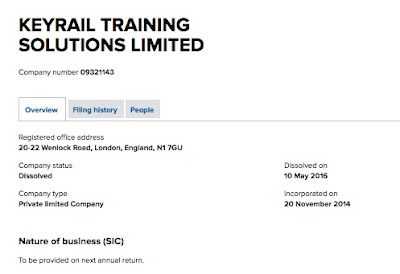 The alleged fraud was  uncovered in the summer of 2016 and the removal from the list may have followed the result of that investigation being reported to the SFA.

The extent of the alleged fraud clearly  supports the IFS concerns but also raises the whole issue of governance of the FE sector, monitoring and audit arrangements, the role of the SFA and risks associated with the privatisation of the sector and the lack of democratic accountability. There is also concern that Indro Sen, the UCU representative at CNWL who assisuously pressed for a full investigation into the issue remains suspended by CNWL management.

It reminds me of the whistleblowing by Hank Roberts, ATL representative at the then Copland High School when he uncovered a fraud at the school.

It is unclear what action has been taken by the police but it is perhaps noteworthy that Mark Gallagher, Brent Borough Commander, is on the governing body (Corporation) of the College of North West London.