Brent Council Tax to rise 3.99% in EACH of the next 3 years and borrowing to increase

In a report LINK going before Cabinet on February 13th Brent's Chief Finance Officer is recommending a Council Tax of 3.99% over eachof the next 3 financial years:

In October 2016, Cabinet agreed to consult on a 3.99% increase in Council Tax (2% Adult Social Care precept plus 1.99% for general purpose). Some additional savings of £4.4m were also consulted upon. Following that, in December 2016, as part of the provisional local government finance settlement, central government recognised the immediate pressures in the care market. It has therefore allowed local authorities to bring forward up to 2% of the precept for 2019/20, by increasing 2017/18 and 2018/19 council tax by an additional 1%, in return for a corresponding reduction in the precept for 2019/20. Brent could therefore increase Council Tax by up to 4.99% in each of 2017/18 and 2018/19, but if it exercised this flexibility then the maximum allowable increase in 2019/20 would be 1.99%.

After due consideration the recommendation of this report is that the budget should be constructed on the basis of a council tax increase of 3.99% in each of the next three years. This is what was consulted upon and so is clearer for residents. The additional flexibility announced in December 2016 is also of relatively minor financial benefit to the council, and has negligible long term impact from 2019/20 onwards. By increasing the council tax in this way the impact of stark and ongoing reductions to local government funding since 2010 will be partly mitigated.

In fact consultation responses have been low with 57 on line (with no clear pattern of responses) at the time the report was written and these attendances at Brent Connects meetings:

The report goes on:

Although demography, in this context, is typically discussed as a cost pressure it also results in additional income. As a consequence of this, and of the planning and regeneration policies adopted by the council, the council tax base (i.e. the number of properties on which council tax is paid) is growing significantly year on year. This increases the council tax payable to the council, and helps the council finance the various pressures caused by population growth.The council is required to balance its budget in this year as in all years.

In order to balance its budget the council has developed an approach that will help it meet the goals of the Borough Plan and Brent 2020 Vision, comprising:

Increases in council tax to minimise the requirement to reduce services;
Innovative capital investment to reduce costs in key services, such as temporary accommodation;
Planning for growth in services facing major demographic pressure for example adult social care;
and Investing in key services for the Brent community, e.g. community safety.

The Council hopes to achieve  £5.6m through a civic enterprise project to increase income from Council assets (you have probably see the posters encouraging people to get married at the Civic Centre) and £8m from improving commissioning and procurement services. The Council is hoping to sell its procurement services to schools.

It is clear that increasing the number of properties in the borough is seen as one way of increasing Council Tax income, even if they are not affordable for ordinary Brent residents on an average income. Population growth increases income for charged services such as parking.

The Council has a big capital investment programme and it is planned to increase borrowing to finance the projects. Expenditure was £111.7m less than expected this year due to a variety of delivery delays and the balance will be carried forward. The Council is planning to increase the amount it raises and increase the authorised limit:

It is important to stress that the authorised limit – the maximum amount that the council may borrow – has for a number of years been several hundred millions pounds above the level of actual borrowing – last year it was set at £400m above the level of actual borrowing. It is proposed to increase that by £100m to £500m, in light of the Council’s investment strategy, while recognising that the Council has been prudent with its estimate of the additional resources that may finance capital spend. Potentially, the additional growth would cost up to an additional £3m to service annually, should the borrowing become necessary, and if this was not offset by additional income or savings. The calculation noted above merely follows from the strength of the council’s balance sheet, as it is largely prescribed by statute and regulation. 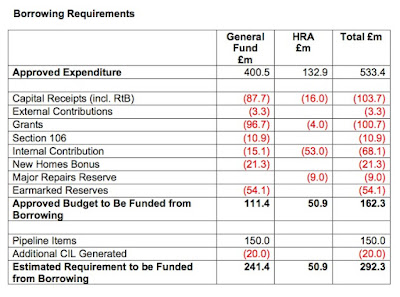 One area of interest is the school budget where the report notes that:

Overall DSG (Dedicated Schools Grant)  funding has increased for 2017/18 due to growing pupil numbers, however on a per pupil level it remains a cash flat settlement, with the main schools block funded on 41,879 pupils at £5,522 per pupil totalling £231.3m. The other blocks support early years provision, funded at £23.4m, and high needs provision which includes all special schools, funded at £52.7m. Total DSG funding for 2017/18 is £307.4m.

A number of schools are expanding and as a result overall pupil numbers have increased by over 500 in Brent. The two secondary schools experiencing rapid growth of 58 and 116 pupils have gained £238K and £675K, whilst 26 primary schools experienced growth in pupil numbers with an average gain of £125K. Reductions in funding are also in line with decreasing pupil numbers, for example two secondary schools have significant drops of 25 and 54, which results in funding reductions of £260K and £441K respectively. In the primary phase, 30 schools had a fall in pupil numbers resulting in an average reduction of £44k.

After the expansions of recent years a reduction in pupil numbers in a number of schools is significant, particular when the potential impact of Brexit on immigration numbers is taken into account.  The major factor affecting school budgets is of course the reductions involved when the government introduces a new National Funding Formula.

In considering the budget report, the following key considerations should be highlighted in particular.:

The extent to which the overspends in 2016/17 are structural, that is, that they will or may recur in 2017/18, is a particular risk. Any element of these overspends that may be structural will, if not addressed during 2017/18, require further savings to be agreed next year to offset this. Whilst plans are in place to address this the scale of risk is significant.

Delivering the saving programme agreed in February 2016 will present substantial management challenges, particularly around procurement and civic enterprise savings. Again, considerable management attention has been and is being devoted to ensure that these can be delivered, but it is important to stress again the inherent risks in delivering such a large and complex programme.

That said, the budget now proposed is realistic and affordable, albeit challenging. The increases in council tax set out, if agreed in this and subsequent years, will generate significant additional revenue over time, minimising the number of difficult new decisions about funding for specific services to be proposed. If agreed, this budget would provide for affordable services in 2017/18 and 2018/19, but a further gap of nearly £13m remains in 2019/20. Building on the outcome based reviews and other initiatives to start to close this gap quickly will be an important future consideration.

Where might that Council Tax rise with no let off for those too poor to be taxed leave benefit claimants?

Brent Council, too its great shame, has not consulted on restoring 100% Council Tax Reduction for those too poor to pay any Council Tax.

It may seem good when creditors and debtors reach agreement. But reaching such 'agreements' too frequently results in increased food bank usage, as Kate Belgrave reports: Councils, housing associations and the DWP are crushing people with debt.