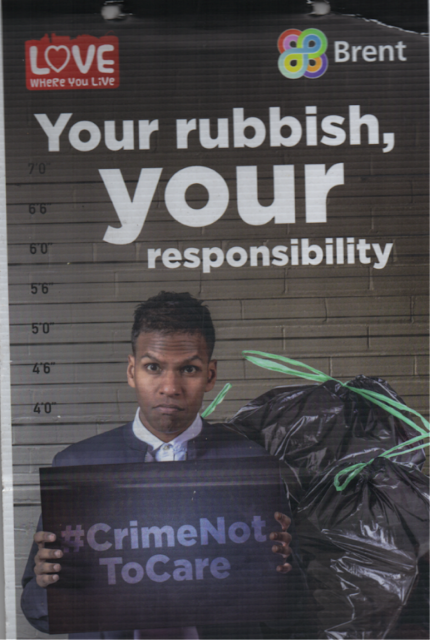 
Please find attached sign that has been place on Kilburn High Road.

A resident approached me claiming, in her view, that the sign was racist.

Whereas I would not go that far, until I hear the full motive behind the cabinet agreeing the signs, I would say I agree with her general concerns.

I believe the signs are inappropriate and could be seen as an attempt to stereotype persons of colour as the culprits of crime and it is also conceivable that used a mug shot of a young black man against a background commonly used by LAPD ( who are widely believe to be the most racist American police-force) as offensive to many people.

I am asking you to remove these signs forthwith from Kilburn - other councillors can make their own minds up. I do not wish to see rows of these along Kilburn High Road as I believe they give the wrong impression to the public about how to care for the environment and who is responsible for environmental crime.

I am concerned this is another display of the Cabinet devotion to the failed Zero Tolerance policy, which is in fact is a reactionary policy. This policy has stigmatised many innocent residents, because of the bounty hunting approach of issuing tickets and now this dubious awareness campaign.

Bearing in mind you as the CEO accept that the Kingdom Securities contract had no negotiations, equalities training or monitoring concerning the issuing of the 6000 Fixed Penalty Notices. I again ask you to independently audit the FPNs to ensure they were issued fairly and were not issued using the person’s colour or mental health conditions as the main factor.

Ms Downs, I am sure you read the Prime Minster’s race audit, which pointed out "Black people are more than six times more likely to be stopped and searched by police than White people". I cannot help thinking this type of subliminal stereotyping being produced by Brent is not helpful to those who wish to see this figures reduced.

I hope you will confirm ASAP:

(1) Removal of these signs from Kilburn forthwith.
(2) How many of these signs went up and where they went -up.
(3) How much the signs cost.
(2) Could you furnish me with the reason behind these signs, as they make no sense to me as they do even mention the fine.
(3) Confirm you will haves an independent audit of the 6000 FPNs issued

Keith Taylor MEP: 'Airport expansion remains a climate-wrecking decision that is bad for the British people and the planet'

The World Meteorological Organization's findings that concentrations of CO2 in the Earth's atmosphere surged to a record high in 2016 must rule out any airport expansion, according to Keith Taylor, Green MEP and a member of the European Parliament's Environment and Transport Committees.

Responding to the news that last year's increase in CO2 emissions was 50% higher than the average of the past 10 years, Mr Taylor, the European Chair of the Climate Parliament, said, in light of the Government's relaunched Heathrow expansion consultation:

"The Government's analysis on air pollution alone must rule out a third runway at Heathrow. But before the Gatwick airport PR machine leaps into action, today's shocking news about the levels of CO2 pollution in our atmosphere is a timely reminder that the only climate-viable option is no new runways."

"Aviation is a top ten global polluter and emissions from the heavily subsidised industry are set to balloon by 300% if action is not taken sooner rather than later. Not accounting for any airport expansion, emissions from aviation are already expected to use up more than two-thirds of the UK's carbon budget by 2050. At the same time, the Government's so-called 'Clean' Growth Strategy just this month revealed that the UK is already set to miss its legally-binding carbon targets under the Climate Change Act. Again, without building any new runways."

"Despite what the exceedingly what well-funded PR machines of Heathrow and Gatwick airports would have politicians believe, the UK doesn't have an airport capacity crisis. Britain is already amongst the most frequent flyers in the world, in fact, more passengers fly in and out of London than any other city in the world. Every airport but one is operating under capacity. And the cases put forward by Gatwick and Heathrow to solve the manufactured 'crisis' rely on vastly inflated job creation predictions and hinge on a dubious demand assumptions."

"Nine of the ten most popular destinations from Heathrow involve short-haul flights. In fact, almost half of all flights in Europe are 300 miles or less. Existing rail services could offer genuinely workable alternatives on most of these routes. As trains are less polluting than planes, by a factor ten, this would help reduce aviation emissions, and free up landing slots for longer haul flights."

"Three-quarters of international passengers are disproportionately wealthy and travel for leisure. The vast majority of the UK’s airport capacity, 70% of flights, is used by a minority of frequent flyers, 15% of passengers. The current taxation system means those who don’t fly and those who fly even just once a year are subsidising the jet-setting lifestyles of a privileged few. We must, instead, reject the ‘crisis’ myth, and work to reduce demand while making the industry fairer."

"Airport expansion remains a climate-wrecking decision that is bad for the British people and the planet. By continuing to back a new runway, the Government is displaying a shocking disregard for the UK’s legal and moral obligation to tackle the very worst effects of climate change. Expansion will breach Britain’s carbon budgets and make a mockery of Theresa May’s legal-binding commitments under the Paris Agreement.”

"As Greens, we support a fairer frequent flyer levy that would help reduce demand driven by the privileged few and reduce costs for the average UK holidaymaker."