Transport for London is consulting on new transport connections as a result of the building of HS2 and the Elizabeth line. There would be new Overground stations at Old Oak Common Lane and Hythe Road. Details from TfL below.

Old Oak and Park Royal is one of London’s largest Opportunity Areas and one of the largest development sites in the country, with the ambition to deliver a whole new centre and community for west London which includes 25,500 new homes and 65,000 jobs.
Old Oak is the only place where High Speed 2 (HS2), the new high speed railway between London, the Midlands and the North, meets the Elizabeth line, London’s new East-West railway. A new station at Old Oak Common will open in 2026, providing both connections to the Elizabeth line, HS2 and National Rail services and a hub for regeneration.
In 2014 we consulted on the idea of providing further transport connections to the London Overground network at Old Oak with three options proposed. Over 83 per cent of respondents either supported or strongly supported this idea. There was also a clear preference for Option C which suggested two new Overground stations; one at Hythe Road on the West London line and one at Old Oak Common Lane on the North London line.
Following on from the 2014 consultation, working closely with Network Rail and the Old Oak and Park Royal Development Corporation (OPDC), and co-funded by the European Commission, we have undertaken work to develop an initial design for the potential stations at Hythe Road and Old Oak Common Lane. We would now like your views on these designs.
In 2016 the Mayor of London carried out a review of the overall direction and work programme of the OPDC. The review recommended that additional work should be undertaken to support the case for the potential London Overground stations at Old Oak. Further work on the business case is currently underway and your views from this consultation will form an important part of the wider business case work. 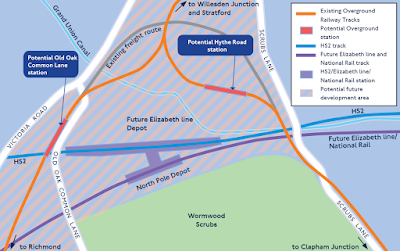 From 2026 HS2, the Elizabeth line and National Rail services are expected to call at a new Old Oak Common station and the area will benefit from excellent east – west rail connections, including to central London and Heathrow Airport.
Passengers wishing to travel by rail to Old Oak from the north or south would need to go by London Overground to Willesden Junction. Although Willesden Junction station is 1.5km away from the new Old Oak Common Station, there is no convenient link between the stations which would make it difficult for passengers to interchange between HS2, Elizabeth line or London Overground services.
Providing good public transport connectivity at Old Oak would also support the regeneration proposed in the OPDC’s draft Local Plan (2017), the Old Oak and Park Royal Opportunity Area Planning Framework (2015) and the Mayor’s London Plan (2016).

What are the benefits of the new London Overground stations?

·      Better access to public transport across west London.
·      Enable more journeys to be made without going into central London, in turn reducing pressure on trains and stations in central London
·      Improve access to HS2, Elizabeth line and National Rail services from areas of London connected to the London Overground network.
·      Enhance the regeneration benefits that HS2 and the Elizabeth line will bring to the Old Oak and Park Royal area.
·      Support the wider, OPCD-led development of Old Oak and Park Royal
·      Increase the number of destinations that can be accessed directly from Old Oak.

Working with our partners

Following on from the 2014 consultation, and supported with funding from the European Commission, we have worked up an initial design for both stations. Working closely with Network Rail and OPDC the designs have developed, leading to a single preferred option for each station. We have also worked closely with OPDC to ensure these designs would integrate with the proposals set out in its draft Local Plan.

What we are consulting on?

Hythe Road
Hythe Road station would be situated on the West London line about 700 metres from the Old Oak Common station and in one of the largest development sites within the OPDC area. This development site is owned by the company Car Giant and known as Old Oak Park. Car Giant, supported by the property development company London and Regional, is independently proposing a large-scale redevelopment of its land.

What options have been considered?

Which option is TfL consulting on?

Option 1B is the preferred option as it provides greater opportunity for regeneration and the creation of new spaces that support the wider development. In addition, this option reduces the severance caused by the embankment, making it easier for people to move around the area.
Old Oak Common Lane
Old Oak Common Lane station would be situated about 350 metres to the west of the HS2 and Elizabeth line station, sitting on the North London line between Old Oak Common Lane and Midland Terrace. This station would provide the most convenient interchange between London Overground, HS2, the Elizabeth line and National Rail services. The location of this station is constrained by other railway lines, roads and residential properties.
To the west of Old Oak Common Lane station, there is an aspiration to provide a pedestrian and cycle link, connecting Old Oak Common Lane and Victoria Road. This link would make it easier for people to move around the area as currently the patchwork of railway lines act as a barrier. While a pedestrian / cycle link crossing the railway lines is not essential for the new station, we have included possible provision for such a link in each option as we believe it would be important for opening up the wider area.

What options have been considered?

Which option is TfL consulting on?

Option 2B is the preferred option as it reduces the level of disruption to the railway during construction and provides better value for money.
Although the provision of an overpass to Victoria Road is not a requirement of the potential station, the design would allow for this to be provided, either at the same time as the station or at a later date. The decision to proceed with such a link is not confirmed and would be subject to further review and discussion with local stakeholders including residents, landowners and OPDC.

The business case work for the stations is being undertaken at present and further work is required to determine the future operational requirements. In addition, the work is only funded up to the end of the current stage, and investigations are under way to consider how the stations could be fully funded. The outcome of this consultation will inform the business case work, and ultimately will help us determine next steps.
If there is support to build the two stations, and funding is confirmed, powers to build and operate them would need to be secured through a Transport & Works Act Order. As part of this process it is likely the proposals would be examined at a public inquiry before being determined by the Secretary of State for Transport.
Further consultation on the proposals would be carried out before we submit a Transport & Works Act Order.

We are holding public events to give people the chance to ask questions and meet the project team. These events are taking place at;

We would like to know what you think about our proposals.
Please give us your views by completing the online survey below by
Alternatively, you can:
·       Email us at consultations@tfl.gov.uk
·      or write to us at FREEPOST TFL CONSULTATIONS
You can also request paper copies of all the consultation materials and a response form by emailing consultations@tfl.gov.uk, or writing to FREEPOST TFL CONSULTATIONS.
The sole responsibility of this publication lies with the author. The European Union is not responsible for any use that may be made of the information contained therein.