Bob Blackman, Conservative MP for Harrow East and former leader of Brent Conservatives has been accused of hosting an Islamophobic speaker at a House of Commons meeting.

Tapan Ghosh frightens his supporters by repeatedly talking about the Muslim “reproduction rate” - the same tactics as those talking about “breeding”. For him, “moderate” Muslims are “really very small in number”. He endorses wacko fringe websites, which naturally includes Breitbart, Voice of Europe, and of course anything from Hindus who share his worldview. He has endorsed Stephen Yaxley Lennon’s Islamophobic agenda.


All of this is not difficult to discover. Yet Blackman has been happy to host Tapan Ghosh, who dressed up his bigotry in his talk “Tolerating the intolerant” as “800 years of defending human rights”. And that is not all: this talk not only took aim at “800 years of Arabic Islamic aggression” (Muslims in Bengal are not Arabs), but also “200 years of European Christian aggression”. Tapan Ghosh is as anti-Christian as he is anti-Islam.

A few days after the House of Commons meeting, according to Buzz Feed's Aisha Gani LINK, Ghosh met up with Tommy Robinson, former leader of the English Defence League and tweeted: 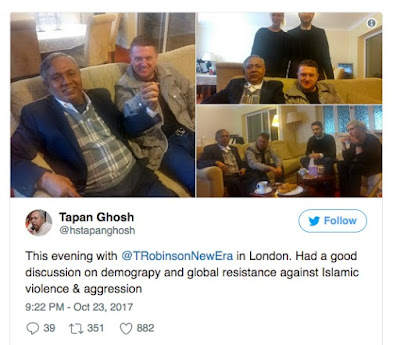 Other Tories at the meeting included Amber Rudd, Damien Green, Priti Patel and Sajid Javid. They might argue that they did not know Ghosh's reputation and their attendance did not mean they endorsed his views and that it was a wider event to celebrate Diwali but Blackman has no such excuse.

This is much more serious than some of the current controversies surrounding other Members of Parliament.
Posted by Martin Francis at 20:28:00

As Tim Renton (Zelo Street) makes clear, Blackman knows exactly who he's dealing with and we know exactly why he's doing it.
As for your generous point, Martin, that 'Amber Rudd, Damien Green, Priti Patel and Sajid Javid...... might argue that they did not know Ghosh's reputation and their attendance did not mean they endorsed his views and that it was a wider event to celebrate Diwali', they would be well-advised to remember God's words, as memorably quoted by Billy Connolly :
'Ye ken noo!'