Welcome progress on climate change was made at this year's TUC Congress. The latest Greener Jobs Alliance Newsletter for October 2017 LINK contains the following reports.


Unions want power sector back!
This year’s TUC Congress in Brighton unanimously agreed new, far reaching policies demanding the democratic control of energy and a modern low carbon industrial strategy. An ambitious motion from the Bakers’ Union brings the trade union movement much closer to the vision set out in Labour’s election manifesto. It also brought a dozen delegates to the rostrum, urging the TUC to campaign for the UK’s rigged energy system to return to democratic control, and to work with unions on a cross-sector industrial strategy to tackle ‘the irrefutable evidence that dangerous climate change is driving unprecedented changes to our environment’ 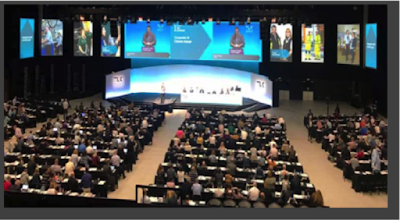 Addressing TUC Congress: Sarah Woolley, Bakers, Food and Allied Workers Union
The TUC motion LINK proposed in a speech by Sarah Woolley from the Bakers, Food and Allied Workers Union (BFAWU – see picture), has five key demands for the TUC to:
•   Campaign to bring the UK’s rigged energy system under democratic control.
•   Back a mass programme of homes insulation
•   Demand rights for workplace environmental reps
•   Demand that Just Transition in integral to industrial strategy
•   Consult with unions on a cross-sector industrial strategy focused on our internationally agreed carbon emission reduction targets.  Sarah Woolley argued that the breakdown of the planet’s climate is a core issue for her union, with its global impacts on food production and distribution. Agriculture and food manufacture, processing and transport accounted for a tenth of the UK’s greenhouse gas emissions. Meanwhile, hurricanes were devastating the Caribbean, while floods in India had caused massive damage to its infrastructure. And the UK’s rigged energy market would not deliver secure, low carbon and affordable energy for all. ‘We need an industrial strategy to confront the realities of climate change. All sectors need their just transition strategies,’ Sarah argued.  See the full text of the TUC motion on page 7
Best ever green fringe at TUC?
At one of the best attended green fringe meetings at this year’s TUC, Suzanne Jeffrey, chair of the Campaign Against Climate Change, announced that her organisation was planning a national conference on Climate and Jobs - another world is possible on 10 March 2018 (note date in your diary!). She said the new TUC commitments provided an opportunity for progressive new policies for the labour movement.


The Campaign Against Climate Change meeting was backed by the Greener Jobs Alliance. Here’s how union leaders spoke of the need to tackle climate change:
•   Sarah Woolley, BFAWU regional secretary: ‘We need to know much more about the impacts of climate change and explain it to our members. We need to be at the forefront, getting our members trained as environmental reps in the workplace.’ Tackling fuel poverty and bringing energy back into our ownership were two key priorities.
•   Diana Holland, Unite’s Assistant General Secretary: ‘Jobs and a safe climate...We have to deal with both...we have to make those words Just Transition really mean something for union members.’ We cannot protect transport workers’ jobs without acknowledging the impacts of transport on the environment. For example, Unite is tackling diesel emissions as a workplace health and safety issue through its Diesel Emissions Exposure register LINK  ‘Because we work in so-called environmentally damaging industries, doesn’t mean we aren’t in the game,’ she said. The union is taking various steps to raise awareness among union members and engaging them in consultations with employers.
•   Chris Baugh, Assistant General Secretary PCS:  ‘We have come a long way in the past year, by focussing on the core issues of just transition and energy democracy.’ In PCS, in Lancashire, PCS members are challenging claims that fracking will create a jobs bonanza, when there are abundant opportunities in other sectors. And at Heathrow, a PCS study on jobs in aviation LINK  has helped inform the debate on the real economic benefits of expanding aviation capacity.
•   Graham Petersen said the online environmental education courses provided by the Greener Jobs Alliance, including a new unit on air quality, was filling a gap in mainstream trade union education programmes.
•   Sean Sweeney from Trade Unions for Energy Democracy said that there’s a growing community of unions pushing for public ownership and control of energy as a means of controlling climate breakdown LINK