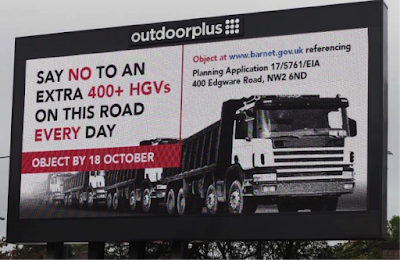 Timely reminder to object to the aggregate superhub by 18th October.

Noise, dust and traffic is not what we need in Cricklewood.

If you’ve already objected, have your neighbours and the rest of your household?

The effect on air quality and traffic on the A5 and surrounding roads will be horrendous, dangerous even, and it is going to impact our health and quality of life.

This kind of thing doesn't belong in a residential area, especially one with two schools.

You can email the case officer to object using he case reference below.
Chloe.Thomson@barnet.gov.uk

Background information for submissions from Alison Hopkins via Facebook

This Application is for the development of a permanent facility for transfer of aggregate and waste between freight trains and HGVs on a patch of Railway land close to the A5 and just within the North Circular Road.

Trains would serve the terminal (initially at least) from the north- most of the stone and sand coming from Derbyshire for distribution by road across London- and construction waste would come in by road and leave by train to Bedford.

450 per day equates to nearly 1 per minute

If in and out that’s approximately1 per minute in each direction (is this right?) all day every day, including morning and afternoon peaks.]

These heavily laden diesel engined HGVs will be travelling along the already congested A5, with frequent stopping and starting- effectively maximising their potential for airborne pollution.
The HGV stream travelling in the out-of-town direction wouldl reach the already congested access to the North Circular road after about 500m. The other HGV stream, travelling towards central London would, within 500m, arrive in at the already heavily congested intersection with Cricklewood Lane and Chichelle Road-Walm Lane.

Cricklewood is extraordinarily well served with bus services- some radial along the A5, some orbital. But these services are all subject to uncertain delay at peak times. The HGV stream would significantly disrupt these services throughout the day.

The residents of Railway Terrace- an attractive Victorian development of terraced cottages- which immediately adjoins the site- are, very reasonably, alarmed at the prospect of excessive noise, vibration, and pollution. But the wider communities of Cricklewood, North West London, and London generally should also be concerned about the airborne pollution generated by a continuous stream, throughout each day, of heavily laden HGVs onto the A5.

If London needs such a freight facility, then evidently it should be located with direct access to a major radial road with sufficient capacity to absorb the stream of HGVs without their continual stopping and starting and hence maximising pollution.

Has Barnet sought an independent and authoritative report on the potential consequences for pollution and road congestion of the proposals?

From the viewpoints of Airborne Pollution minimisation (in this heavily populated residential area of NW London in particular), reliability of Public Transport (numerous bus services will be adversely affected), and the principles set out in the Mayor’s Transport Strategy (endorsed by Barnet Council incidentally), the proposed development is abhorrent and should not go ahead

The planning application reference number is 17/5761/EIA. The deadline for comments is Wednesday 18 October. LINK