Greens in the European Parliament  today call for an arms embargo against Saudi Arabia in the wake of serious allegations of breaches of international humanitarian law by the country in Yemen.

Ahead of the vote in the Parliament today, Greens have put forward a motion condemning the Saudi Arabian-led coalition airstrikes against Yemen; calling for a halt to military confrontation and expressing deep concern that some Member States are still supplying arms to Saudi Arabia in breach of EU arms exports rules. Greens also say that ongoing licensing and direct military training by EU Member States should be considered complicity in war crimes.

Molly Scott Cato, Green MEP for the South West, slated the UK government for initiating a secret deal with Saudi Arabia to ensure both states were elected to the UN human rights council and for being the largest arms supplier to the region since 2010; export licences to the kingdom under the coalition government of 2010-2015 totalled nearly £4bn. She said:


It is barbaric and totally immoral that we supply military equipment to a regime engaged in war crimes. Clearly Cameron sees the vested interests of the UK arms industry as more important than the lives of innocent children in Yemen. As for Saudi Arabia chairing the UN human rights council, this is an outrage that insults the many thousands of women, minorities and dissidents who have had their rights abused at the hands of this oppressive regime.

See also a full response to constituents who have contacted Molly regarding the Saudi Arabian-led intervention in Yemen.
Posted by Martin Francis at 16:18:00 No comments:

Disabled children miss out on play opportunities - call for action


Last year Brent Council removed the funding from Stonebridge Adventure Playground and demolished it.  The playground had been the site of integrated play facilities for disabled and non-disabled children.

This report makes the case for play.

A report by the national deafblind charity, Sense, reveals the severe restrictions facing disabled children in accessing play. The report identifies failings at every level that result in disabled children missing out on play opportunities that are vital to their emotional, social and physical  development. A lack of attention by government, insufficient funding at a local level and negative attitudes towards disabled children and their families are all barriers highlighted in the report.

The report calls for urgent action to address these inequalities and to enable the Prime Minister to deliver on his recent call to improve the “life chances” of all children.

The report follows a three month public inquiry into the provision of play opportunities for disabled children aged 0-5 with multiple needs in England and Wales. Chaired by former Secretary of State for Education and Employment, Lord Blunkett, the inquiry was established in response to parents’ concern that they had fewer opportunities to access play services and settings than families with non-disabled children.


We know that play is vitally important for children with multiple needs and their families, bringing a wide range of developmental and emotional benefits. However, our inquiry found that all too often the parents of children with multiple-needs point to barriers they face in accessing and enjoying play. It means that disabled children don’t have the same chance to form friendships, and parents are prevented from taking a break from caring. Both disabled children and their parents are excluded from their own communities.

I know that there is strong support across the political spectrum for addressing the findings of this report, and I look forward to working with colleagues from all parties to achieve real change for parents and families across the nation.

Key findings from the report:

92% of parents felt that their child did not have the same opportunities to play as their non-disabled peers, and 81% of parents reported difficulties in accessing mainstream play groups and local play opportunities.

·         51% of children had been turned away from play settings by providers, failing to meet their legal duties under the Equality Act 2010.

·         95% of parents said that parents of children with multiple-needs require support to find ways to play with their children.

Majority of parents had experienced negative attitudes towards their child from other parents and most considered this to be the most significant barrier to accessing mainstream play.

63% of parents said they didn’t have enough information on accessible play opportunities in their area, and word of mouth is commonly used in place of official sources of information.

Families feel there is a lack of specialist support that can be accessed locally, and many make long journeys to access play settings.

There is a lack of strategic approach to funding play for children with multiple needs at local and national levels across England, with no notional funding for special educational needs and provision in the early years


Key recommendations from the report:

·         Greater investment in play as part of early years funding to support play in the home and in mainstream services.

·         Developmental play services such as Portage should become a statutory service for disabled children under the age of two, with an increased emphasis on children with multiple needs.

·         Play should be a key strand of the Government’s policy on parenting and should be an explicit part of government-funded parenting classes.

·         The Equality and Human Rights Commission should investigate the exclusion of children with multiple needs from mainstream play settings, and take action to enforce the Equality Act 2010.

·         Local authorities should be required to take action, as necessary, against settings which intentionally exclude disabled children and fail to meet their legal duties under the Equality Act 2010.

·         Local authorities should take a lead on increasing awareness and understanding of the general public and other parents about disabled children. This could be centrally funded but locally delivered.

·         Local authorities should consider whether there could be a modest retraining of existing health professionals to enable them to provide the support needed to help families of children with multiple needs to play.

·         Local authorities should provide easily-accessible information for parents to help them to find out about existing play and support services.

Settings should ensure that play staff have received training on disability to help improve the way they support children and families.  This should include responding to medical needs and communicating with children with specialist communication needs.  The training should also enable them to create an environment and ethos which is inclusive and developmentally appropriate.

·         Every play setting should have a play policy statement which stresses the inclusion of every child.

·         Settings should plan carefully prior to the admission of every child in order to ensure their needs are met and that they will be welcomed and understood by other parents and their children.

·         Voluntary sector organisations should do more to share their significant experience of supporting children with specific impairments and multiple needs with public and private play settings.  This could include offering training and toolkits on inclusive play.


Play is critical in giving children the best start in life and improving outcomes for children and their families. The report makes clear, however, that where a child has multiple needs, the barriers they face to accessing play settings and activities are also multiplied. We hope that local and national policymakers, as well as play professionals, reflect on today’s recommendations, and make the necessary changes that will make access to play a reality for all children.

Sense will use the inquiry findings to campaign for changes to the way play services are designed and delivered. They plan to produce a series of toolkits for parents, providers and commissioners of play.

The full report can be downloaded at: www.sense.org.uk/play
Posted by Martin Francis at 08:01:00 1 comment: 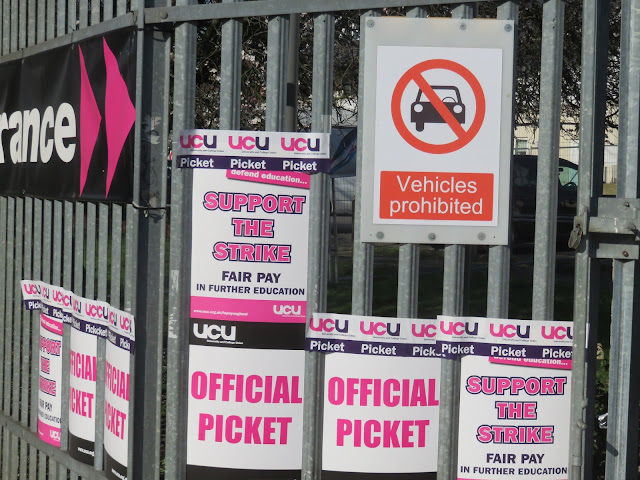 A UCU officer reported strong support for the joint UCU and Unison strike at the College of North West London today. This was part of a joint national strike across all English colleges demanding £1 per hour extra for all.

UCU said that they are in dispute with college employers because they failed to agree a pay claim aimed at achieving a fair deal for all further education (FE) staff.

Unions claim that the £1 per hour increase is fair, reasonable and not excessive and would go some way to recover the value of pay lost over recent years.

The the Association of Colleges (AoC), however, recommended all of their member colleges to freeze the pay of staff and subsequently declined to re-open talks, despite the recent governmenrt spending review decision to protect core funding for 16-19 year-olds and adult skills would be protected.

Since 2009 Fe workers claim they have received a cut in real terms  of over 17%.


FE has been hit hard by cuts and UCU and others in the sector have campaigned to defend funding. However funding cuts don't tell the whole story, colleges still make choices.

Colleges are deliberately choosing to spend less of their income on staff. Staff are asked to work harder and longer while colleagues lose their jobs and see other terms and conditions cut.

Without the ability to retain and motivate experienced and committed staff, colleges will find it hard to deliver education to our communities.

On Saturday March 5th there will be a conference on Defending Further and Adult Education at SOAS, Thornhaugh Street, Russell Square, London WC1H OXG.

The conference is supported by UCU, NUS, Action ESOL, NATECLA and the Learning and Work Institute.

A Heathrow village resident, a poet and the Green Mayoral candidate speak out for the Heathrow 13 - not to mention the singing!

Locals joined Plane Stupid actvists, environmentalists and many independents to support the Heathrow 13 when they attended Willesden Magistrates Court to received their sentences. They received a rousing welcome as they arrived and calmly put the case for direct action to combat climate change on the steps of the court.


Brent Green Party, Brent Momentum and Brent Friends of the Earth as well as independent Brent activists were all present demonstrating unity in the face of the threat posed to the planet by climate change.

The unity was also demonstrated by the presence of both John McDonnell, depury leader of the Labour Party and Caroline Lucas, Green MP.

Supported by:
CND
People's Asembly
Compass
Green Party
War on Want
Friends of the Earth
Campaign Against Arms Trade
Greenpeace
Fellowship of Reconciliation
The Methodist Church
Pax Christi
The Church of Scotland
and many more
Posted by Martin Francis at 07:23:00 No comments: 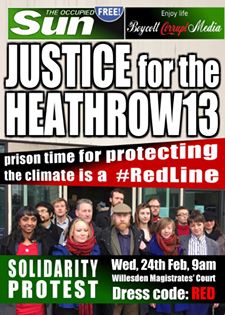 For all those joining us WEAR RED, and together we will form a massive #redline on aviation expansion!! solidarity http://350.org/heathrow-13-the-uks-first-climate-prisoners/

The Wembley Matters reader who scrutinised Brent Council's new scrutiny arrangements in 2014 LINK  looks at the proposals which were adopted by Full Council yesterday evening in this Guest Blog: