Much has been made of Brent Coucil's consultation on the budget and so it is interesting to see how many 'self-selected'  people have participated in this budget round. 'Engagement' is clearly an issue.  The numbers and themes are included in the report going before Full Council on Monday: 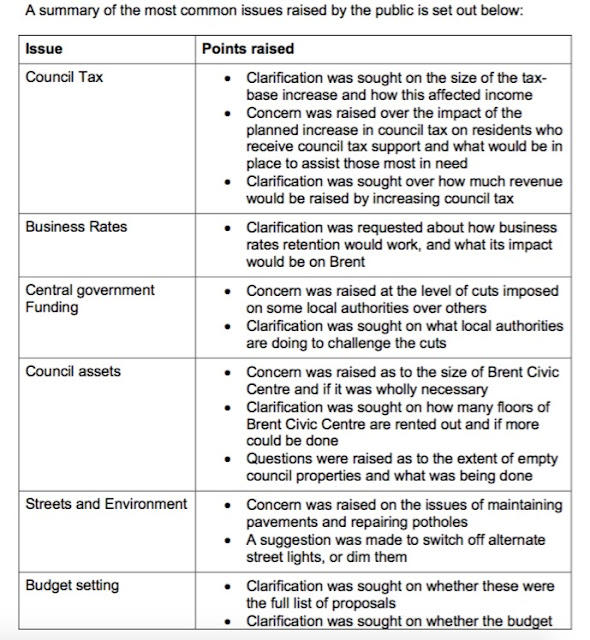 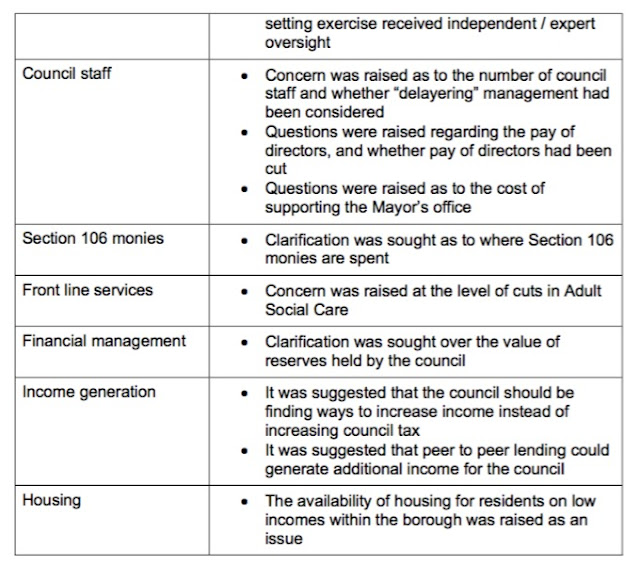 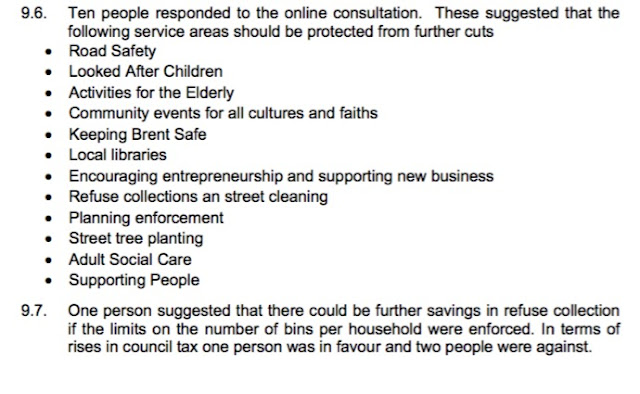 That is a total of 214 via attendance at meetings plus 10 on line. This is equivalent to fewer than 1 in 1000 of the population of Brent. I am not sure what the cost works out at per person when you take into account cost of room hire and officer overtime. The 7 who attended the Grand Hall consultation at the Civic Centre could have been accommodated in the Leader's office!

I was concerned about the low number of people responding to my on-line poll on the Council Tax rise but it appears that only 3 people had a view on the Council's  own on-line consultation.

Cuts of 20% in full time equivalent posts across Brent's eight services are included in the proposals.
Posted by Martin Francis at 15:29:00

With a Dollis Hill hat on, I can tell you that one of the issues is the Forums (Fora) themselves. Hardly anyone from Dollis Hill attends the Willesden one - they don't think of it as including us, for one thing, and the location isn't that convenient.

Is the figure of 224 for total attendance or unique attendances? I was present at 3 of the consultation meetings.

At 2 of the meetings I was at there was considerable anger at why the council was employing a chauffeur for the mayor while cutting services for residents. I notice this doesn't appear on the summary.

Total attendances. Officers out-numbered us at the Civic Centre meeting.

(Alison: Don't they vary the location of the Forums?)


What else could they have done? At least they did this.

I think that the low level of people attending both the Brent Connects meetings and the special budget consultation meetings, and the very low numbers taking part online, is probably a reflection of the low level of trust over whether Brent's "consultations" have any effect on the outcome of the matter being "consulted" on.

I did take part in the 2015 consultation, particularly to support a 1.99% increase in Council Tax (in order to reduce last year's "cuts" by £1 million, and protect Brent's Council Tax base), and to oppose the proposed cuts in funding to the Welsh Harp Environmental Education Centre and Stonebridge Adventure Playground.

After last year's experience, I did not bother taking part this year.

It is hard to sort out the factors that produce such low figures. General cynicism about politics? Specific cynicism over Brent Council - perhaps linked to episodes such as Stonebridge Adventure Playground? Attitude of 'they will do want they want anyway' or 'there is no alternative to cuts'. Perhaps not wanting to play the game of advocating saving some services at the expense of others. Unpopularity of Civic Centre venue for those who live south of the North Circular? 'Mo the Movie' putting them off?

This seems to call for a consultation on the question of whether anyone takes Brent's (or ANY organisation's) 'consultations' seriously any more. I certainly hope they don't as it would indicate extreme unworldliness and innocence if they did. Institutions know that public involvement in 'consultations' is, for all sorts of reasons, usually dire. However, they like them because they can ignore them while still claiming to be a 'listening' bank/borough/bunch of bastards or whatever.
How do we call their bluff?

Sorry to hog things but inadvertently catching sight of Mary Berry on tv just now reminded me to put in a word for the sainted Margaret Thatcher and her Poll Tax consultation. Well, it wasn't really a consultation. More a series of riots really. But very effective in affecting government policy. Maybe a lesson there for the present day.
Good old Maggie, eh, years ahead of her time, God bless 'er.

16:13 They did vary the locations, but they were all well south of Gladstone Park, in Willesden or Dudden. There's not been any this side - the officer I knew, who's gone of course, did try to get them shifted but wasn't able to. One of the oddities of buses is that CNWL or the Dudden Community Centre need two changes or a round the houses journey.

The biggest issue, I think, is that the vast majority of residents simply don't know about either the forums/fora or the consultations. I'll lay odds none of my neighbours here do, unless I tell them. Yes, Brent uses social media to a degree, but it's really only Twitter. And social media doesn't have the reach that those who use it regularly might think.

There was a recent consultation done here about plans to improve road safety, which had a bunch of stuff I kicked off ages back. Highways did it the old fashioned paper way - as a result, there were several hundred replies, far more so than the council tax one.

It's a whole new World, when LB Brent choose to Consult. Fling loads of money to help their cause, whatever the outcome, who gives a shit. we gonna do whatever we want. Who give's a toss, we got the money from central government, massaged the figures and we can show what we want. Dont matter it can be "Meanwhile Space" a load of WASPS, Universities and their enthusiastic Lecturers, bog standard Locals, we will just throw any money we have to anyone that comes along and says they will give us some statistics based on our bullshit, so we can apply for more government funding to do what we want to do, but to hell with the real issues.
Go for it Chairman MO