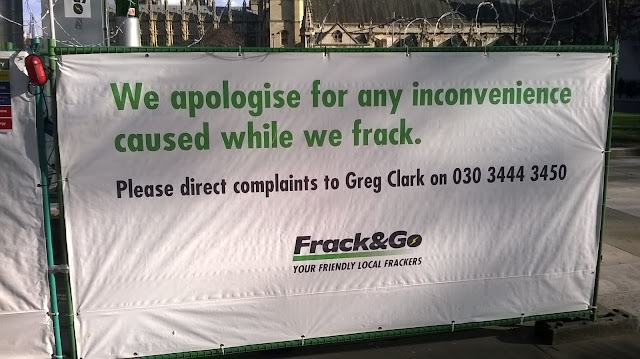 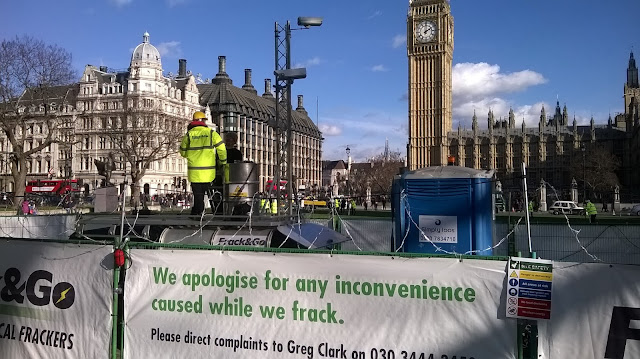 Greenpeace brough the fracking issue into the heart of government today when they erected a fracking rig in Parliament Square. This is their statement:

Take power now. Don't let yourself, any longer, be ruled by someone else.'

Greg Clark, Secretary of State for Commuinities and Local Government

Today we are fracking Parliament Square.

The government probably doesn't want fracking on its doorstep...neither do we.

In June last year, Lancashire council rejected a fracking application, but the government in Westminster plans to recall the council's decision, potentially forcing this dirty industry, and all its impacts, on local residents and councils. Meanwhile, the government is piling the pressure on councils around the UK to fast-track decsions on fracking.

By bringing fracking to the heart of democracy today, we are calling on Greg Clark, the Secetary of State for Communities and Local Government, to make the right decision.

Instead of siding with the fracking industry and railroading local residents and councils, he should uphold their decisions, letting the 'take power' and not ;beruled by someone else.'

To sign the petition to stop Greg Clark from undermining local democracy and forcing fracking on the UK, go to www.greenpeace.org.uk

The rig is expected to be there until 5pm this evening, Why not pop down and offer your support.