The Green Party’s Deputy Leaders today handed in an official appeal to the BBC Trust urging the BBC to re-consider its initial decision not to grant the Green Party of England and Wales a Party Political Broadcast in England.

The Green Party has also launched a petition this morning calling on the public broadcaster to include the Greens LINK .

Amelia Womack and Shahrar Ali, Deputy Leaders of the Green Party of England and Wales, handed in the appeal on behalf of Nick Martin, the Green Party's Chief Executive Officer.

Last week, Martin wrote to the Director General and Director of Editorial Policy and Standards of the BBC to argue that the current proposals, which shut out the Greens and allocate three broadcasts to the Liberal Democrats, fail to recognise the pattern and direction of political support in England. That appeal was rejected and the Green Party has today lodged a further appeal with the BBC Trust, to be heard by the Trust’s Editorial Standards Committee.

Speaking at the hand-in, Womack said:


This time last year it was the public that ensured our inclusion in the televised Leaders Debates. Now we need that support again.

This petition represents an opportunity for us to make sure that the Greens’ unique voice gets heard so we can send more elected Greens to the Welsh and London Assemblies.


The BBC is a public service broadcaster and we feel they have an obligation to treat all parties on an even keel.

By continuing to exclude the Greens from the PPBs it is our contention that the BBC is not fulfilling its duty to ensure balance by communicating the full range of political opinions to its audience.

We have been the only Party giving a voice to the voiceless and it is deeply ironic that the BBC thinks it is okay to exclude us from these important broadcasts. 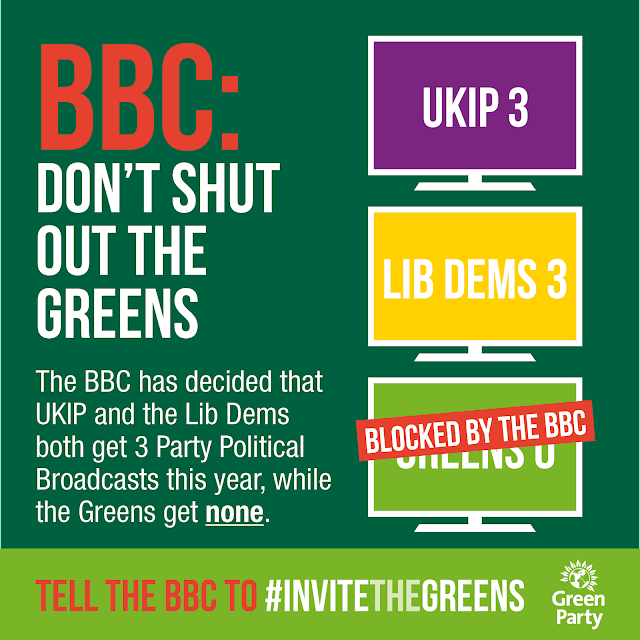