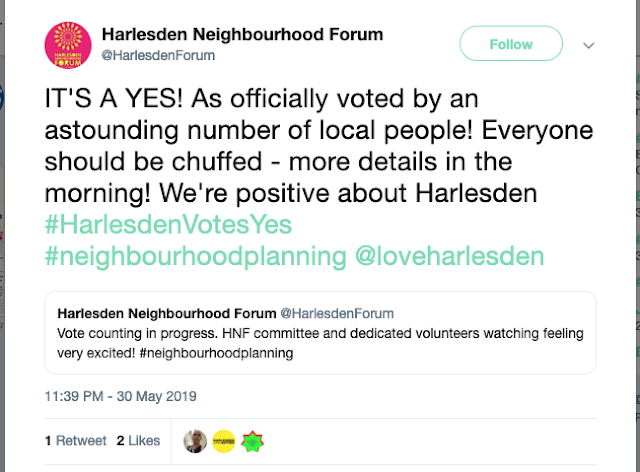 Harlesden residents will now have influence over developments in their local area after 89.61 per cent of voters chose to support a new neighbourhood plan.

The fifteen-year vision offered by the plan includes developing Harlesden whilst at the same time preserving its distinct heritage and resolving some of the challenges faced by its residents, such as rising living costs and access to employment.

The plan was supported by 1139 voters who came out to vote in a local referendum on 30 May and was rejected by 132 voters. It is now set to become a statutory document and will guide development within the area alongside other planning policies.


We’re working with residents to create a future fit for all and to get regeneration right. The community members of the Harlesden Neighborhood Forum put a lot of hard work into creating this neighborhood plan and they now have the support of the local residents to make it a legal document.

It used to be that Conservative politicians looked down their noses at council house tenants. The fact that in the 21st century that prejudice hasn't gone away has been revealed by Brent Tory councillor Michael Maurice.  In an email  seen by Wembley Matters he outlines reasons for his opposition to the redevelopment of the Preston Library site. They include a claim that  a four storey building will be out of keeping with the suburban neighbourhood and that the additional population will impact on parking (Maurice is a parking obsessive).

It appears however that what really gets his goat is that the flats will be 100% affordable and some or all may be social housing. He assumes that such tenants will automatically be trouble:


We also fear that the new flats may lead to an increase in anti social behaviour and whilst many of you do not live near the library, some of us do and this could seriously affect  us.

Cllr Maurice is a former member of Brent Planning Committee which has approved many extremely unaffordable housing applications... 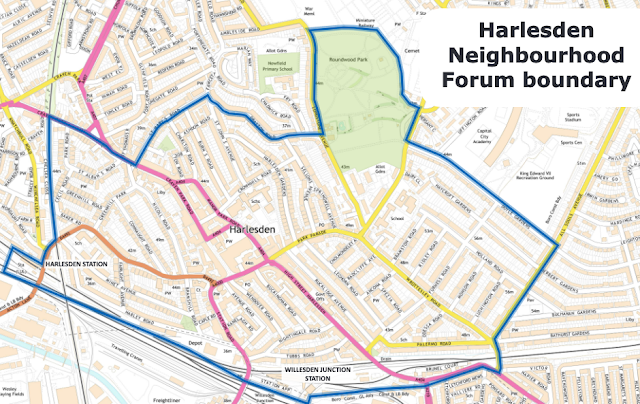 TODAY IS THE DAY for the VOTE on the Neighbourhood Plan!

HAA supports the Neighbourhood Plan - for more info please see this link
Eligible polling stations: John Keble Primary, Harlesden Primary, Furness Primary, Newman Catholic College (Holland Rd), All Souls Church Hall (Station Rd).
Open TODAY 30th May 7am-10pm.
You do not need to bring your polling card. If you have voted in the past local or EU elections, you are likely eligible to vote for the neighbourhood plan. If you do not live within HNF boundaries, (above) you are not. Please go to your local polling station to ask.

Residents angered by the behaviour of football fans at the weekend contacted Brent Council calling for action and some residents even turned up on Council Leader Muhammed Butt's doorstep to complain.

There were three matches, one on each day of the bank holiday, but it was theAston Villa v Derby County match on Bank Holiday Monday that was the main focus of complaints.
Wembley Park Residents Association, in a widely circulated email said:

Yesterday’s football match was one that generated a number of complaints, worries and concerns amongst residents in both Forum House and Quadrant Court.

WPRA have received a multitude of videos and pictures as well as concerning messages but residents sent it via our WhatsApp group so we have tried to compile a list of the evidence for your perusal as it shows a lot needs to be done during such match days.

Please note that fans began arriving in the area at around 8/9am yesterday morning and the noise levels were ever increasing nearing hours before kick off so residents were extremely disturbed and felt the effects of this especially since our local Tesco remained closed for a number of hours before the match even began and Police were also called to the area but through what we have attached you can see there’s a need for a strategy that can look into local policing during match days.

In addition, it further adds to the Wembley Park Estate charges for residents feel this should not be covered by residents on such match days as the litter and antisocial behaviour during yesterday’s Bank Holiday Monday shows why residents feel Quintain should recoup such payments directly from the FA and or Brent should subsidise our council tax (as per discussions during our meeting last week).

May you please get back to us with your thoughts on how best to address this as residents are seeking direction on how best this will be resolved so that it is not repeated in the future.

I had residents calling me and knocking on my door because of the issues you mention.

I can assure you we are looking at what happened on Monday.

The behaviour of the fans was not acceptable and will make sure that all the relevant stakeholders are involved in trying to get to the bottom of this.

I was sent some of the pictures and videos.

Let us look into this and will keep you informed. To which another resident replied 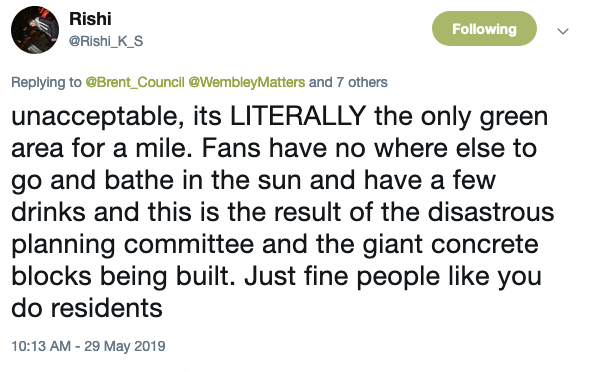 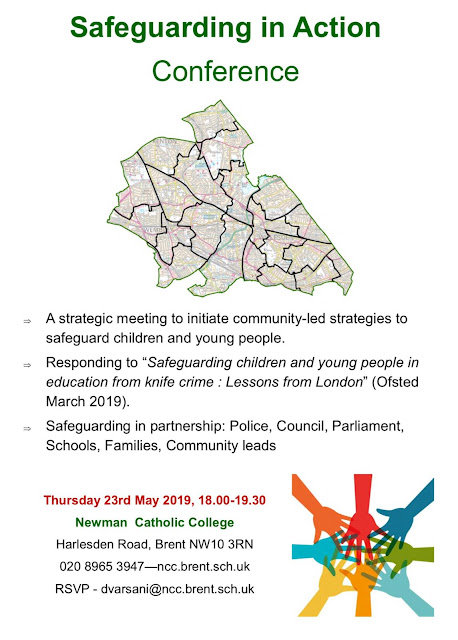 Petition launched to Save the Bobby Moore Bridge tile murals 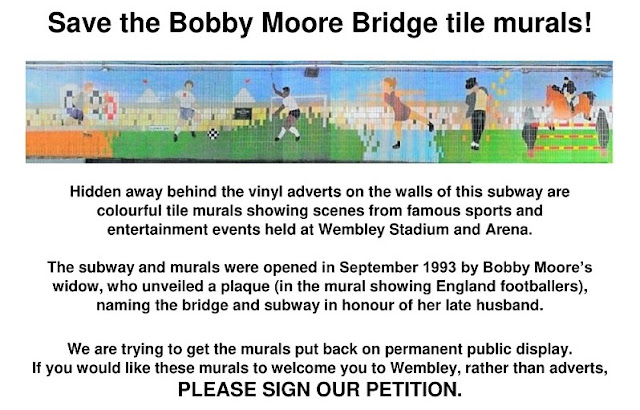 The image used in this poster may be the work of Amanda Rose ( ©amandarosephoto )
– we are still waiting for Quintain to confirm whether or not this is the case.

Guest post by Philip Grant, in a personal capacity.

Comments on my guest blog about the Bobby Moore Bridge planning applications last week LINK led to a paper petition being started. Signatures were collected from last Friday onwards, and forms for this are still in circulation. I will write a little more about those efforts below.

From 21 May until 5 June, there is also an e-petition on the Brent Council website, saying:

‘We, the undersigned, petition the Council to put the tile murals in the Bobby Moore Bridge subway at Wembley Park back on permanent public display, through its Planning Officers or Planning Committee rejecting both of the current applications relating to this site: 19/1387 (illuminated panels and surrounding metal cladding) and application 19/1474 (advertising consent).’

If you live, work or study in Brent, and support the aims of this petition (explained in last week’s guest blog), and have not signed the paper petition, I would encourage you, please, to sign the online petition LINK . The more signatures we achieve, the better the chance of getting these planning applications considered properly, and hopefully in public at a Brent Planning Committee meeting in June or July.

Following the suggestion that we should have a petition, and getting the first signatures on it from local residents, Jaine and I went out on Saturday afternoon, to bring the hidden murals to the attention of fans going to the F.A. Cup Final, and seek their support. They, after all, are some of the visitors to Wembley that the tile murals were designed to welcome, to “the Venue of Legends”.

I had been standing in the Bobby Moore Bridge subway, in front of the hidden tile murals and with a copy of the poster above as a “bib”, for less than ten minutes when I was approached by a uniformed lady from “Wembley Park Security”. She asked me what I was doing, and whether I had a permit. I explained, and said that as I was not selling anything, or collecting money for a charity, I did not think that I needed a permit. She insisted, politely, on taking pictures of my “bib” and petition on her mobile ‘phone.

A few minutes later, she returned with a larger male colleague. They told me that I was not allowed to petition anyone on Wembley Park land, and that I should move away, across the white tiled line at the station end of the subway. I said that the subway belonged to Brent Council, not to “Wembley Park”, and that Quintain had admitted that fact in the planning applications the petition was seeking signatures for. The lady insisted I was wrong, as did her colleague after ‘phoning “Security Control”. I said that they had been given incorrect information, but decided not to argue the point further! 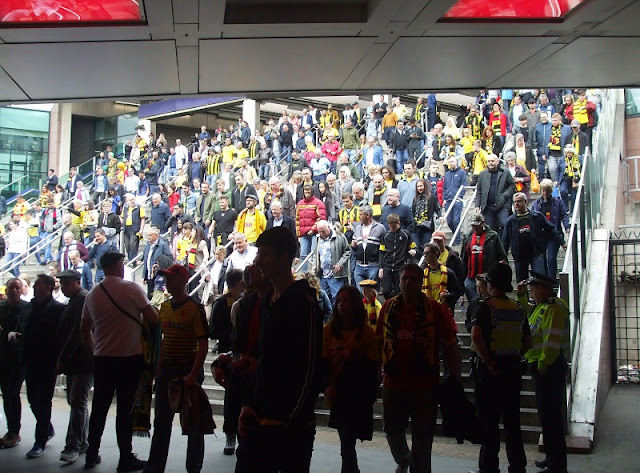 Fans on the steps at Wembley Park Station, seen from the subway about 2 hours before kick-off.

As the place that “Wembley Park Security” had directed me to was right at the bottom of the steps down from the station, and would have caused an obstruction and been a safety hazard, I went across to Olympic Square. I was glad that I did, because it was easier to approach people who were standing, waiting to meet up with friends, rather than those walking towards the stadium.

I have to admit that I only got around 50 signatures – I am more “at home” in a quiet archive than amid the noise and crowds of Cup Final Day! I believe that Jaine got many more, possibly several hundred. They will all help, when submitted with those which two other supporters are collecting.
Among the people I spoke to, there was genuine concern that the tile murals (which few knew about, but some had seen on visits to the stadium in the past) had been allowed to be covered over with adverts. As well as the poster, we had some photos with us showing other sections of the murals that are covered up. When I was speaking to the mother of one family group, her daughter (no more than ten) said: “Look, that’s Michael Jackson!” Although the late singer had serious “issues” in his personal life, he remains a popular entertainer for his music and videos, and she had recognised him from the mural. 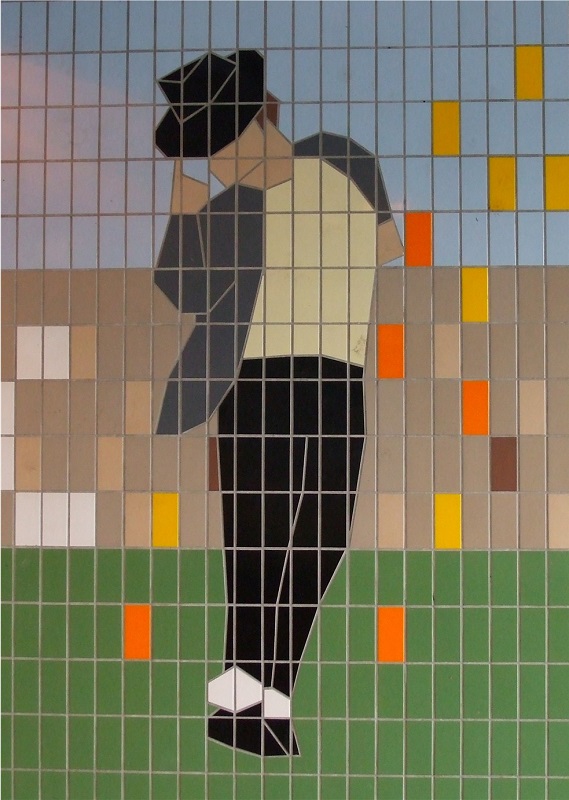 Tile mural scene, from Michael Jackson’s record-breaking
live concerts at Wembley Stadium in the 1980’s.
One older man was disgusted at the disrespect to Bobby Moore, by covering up the mural and plaque in his memory. He wished me luck with our efforts to get the murals put back on public display, but warned that “money always wins.” Unfortunately, he was right about that as far as the Cup Final went, as he was a Watford supporter, and his team lost 6-0 to Manchester City (funded by the billions of a Gulf state ruler). But, with your help, money (in the shape of Quintain) does not have to win over the tile murals.

So, please, use the link above to go to Brent’s e-petitions page, and back the efforts to have the planning applications rejected, so that all of the Bobby Moore Bridge tile murals are saved from damage and put back on public display.

Better still, if you can spare the time, please use the link from last week’s guest blog to go to Brent’s Planning website, and object to both applications, 19/1387 and 19/1474. The blog gives some good grounds for objection, with both applications going against Brent’s Wembley Area Action Plan, and the covering up of the tile murals being against the ‘interests of amenity’ under the advertising consent Regulations.
Thank you.