EU Elections - Make sure you can vote in Brent 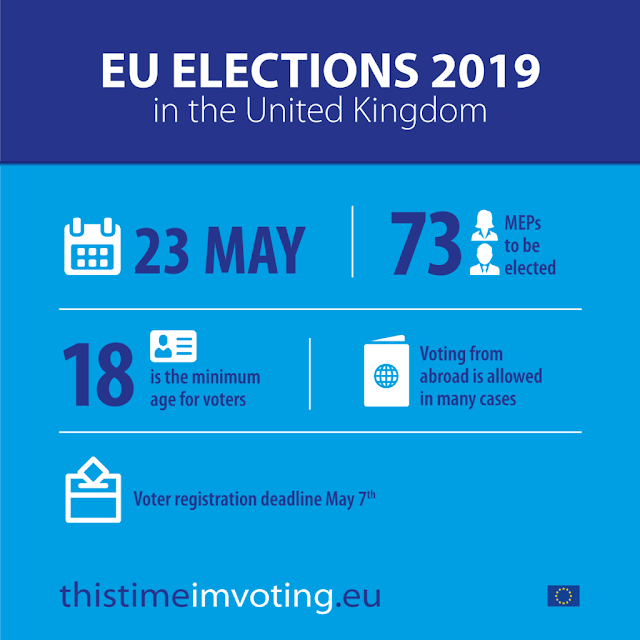 
It’s difficult to predict what will happen with Brexit, but one thing is certain: if you are not registered to vote, your voice will not be heard.

Whether it’s European Parliament elections, a People’s Vote on Brexit or possibly even a General Election, you need to make sure you are registered or you will not be able to vote.


Note: there are local council elections in Northern Ireland and in some parts of England on 2 May, but not in London.

Turnout in EU elections in the UK is historically low — it was just 36% in 2014 — but we can change that to show just what the EU means to voters in Brent.

The EU recognises this as a problem and have started building a community of supporters to help encourage a higher voter turnout at the European elections. Their goal is not to tell people who they should vote for: it is to promote the act of voting itself, the act of engaging in the democratic process; and the act of doing so in a conscious and fully informed way. They want to harness the power of human interaction and build a community of supporters across Europe to rally behind the cause of voting and to stand up for the very idea of democracy. Together we can decide what kind of Europe we want to live in.

Visit their special website to find out more: This time I’m voting.


Residents of the United Kingdom who were citizens of other EU countries were not allowed to vote in the 2016 referendum unless they were citizens (or were also citizens) of the Republic of Ireland, of Malta, or of the Republic of Cyprus and only those 18 or over were allowed to vote. We do not know who will be able to vote next time.
In Brent, 55,000 residents are EU nationals from outside the EU. That is one in six of Brent 335,000 residents.
These residents must also consider whether they need to apply for Settled Status if we do leave the EU. If they don’t apply or are refused, they may have to leave the UK.

EU27 citizens in the UK

For the European Parliament elections on 23 May, EU27 citizens living in the UK have a choice: you can vote in the EU Elections in the UK or in your country of origin.
But you cannot vote in European Parliament elections in more than one country.
To vote in the UK, you must:
1.     Register to vote by 7 May 2019 (see below); and
2.     Fill in the European Parliament voter registration form (no need if you are from the Republic of Ireland, Malta or Cyprus); and
3.     Send the form to your local Electoral Registration Office by 7 May 2019
To find out more, visit Your Vote Matters by the Electoral Commission.

The Vote for your Future website encourages young people to register and vote, saying:

Every election is determined by those who show up

To check whether you are already registered, to find out more including whether you are eligible and what you need to register, visit Brent Council’s Register to vote page, or contact them:
London Borough of Brent
Electoral Services
Civic Centre
Engineers Way
WEMBLEY
HA9 0FJ
020 8937 1372
electoral.services@brent.gov.uk
http://www.brent.gov.uk/elections
For more information on registering to vote, elections and how to vote, visit
Your Vote Matters by the Electoral Commission.
mailto:richcent@hotmail.com]

I have lost all faith in democracy, our current MP's have failed miserably in delivering Brexit, very few have acted in good faith on behalf of their constituents vote in the referendum. My European neighbours are leaving in droves as many feel they are not welcome anymore. 3 of my European friends who have all been resident and worked in this country have sold up and returned to their countries of origin over this fiasco. For the first time in my life I intend to abstain from voting in this election.

As the local elections results show there is still hope of stopping Brexit and the damage it has already caused. The Massive Gains made by the pro EU parties - Liberal Democrats over 700 GAINS and the Greens just under 200 gains lead the way. Barry Gardiner's claim that Labour are trying to help the Tories to deliver Brexit should be a rallying call and an extra incentive for everyone who understands that only by working together with our European partners can we deal effectively with the climate emergency, keep peace in Europe, benefit from our joint prosperity, research and working, have free movement across most of Europe and all the other benefits we gain from our membership of the EU. Only a Vote for the Liberal Democrats or the Greens will put an end to the Chaos created by the divided Tories and confused Labour.