The Bobby Moore Bridge tile murals - will Brent’s Planners let the “cover-up” continue for the next ten years?

Guest post by Philip Grant, in a personal capacity.


Readers may remember a “guest blog”, just over a year ago, when I wrote about an attempt to persuade Brent Council and Quintain to put the tile murals in the Bobby Moore Bridge subway at Wembley Park (which have been hidden by adverts since 2013) back on permanent public display LINK .

An update post, last November, reported on a presentation to Wembley History Society by Julian Tollast, Quintain’s Head of Masterplanning and Design, giving what he saw as the options for the future of the tile murals, which could involve some public display of part of the murals LINK .

Quintain have now submitted their applications, seeking approval of their plans for the (Brent Council owned) Bobby Moore Bridge.

The elevation drawing for the east side of the Bobby Moore Bridge subway,
from a document submitted in support of both applications.

Application 19/1387 is for the lighting and other fixtures that they wish to install, including illuminated panels around 3.5m high by 1.2m wide on the walls of the subway (15 on the east side and 22 on the west side), surrounded by metal cladding, and large illuminated screens facing outwards from the north and south parapets of the bridge. One section of the tile murals on the eastern wall would be displayed, showing a scene of footballers, with the “twin towers” stadium in the background, and including the plaque unveiled by Bobby Moore’s widow when the subway was opened and named in his honour in 1993.

Application 19/1474 is for consent to show advertisements on those panels and screens for the next ten years.

Although I appreciate the effort put in by members of Wembley History Society over the past year, and the willingness of Quintain to at least consider some mitigation of the “cover-up” of the tile murals, I still feel strongly that it is wrong for the murals to be hidden from public view. I will continue the fight to get them put back on permanent public display, and hope that many readers of this blog will join that fight.

I only found out about these applications from careful monitoring of Brent’s planning website. I had asked the North Area team, last year, to notify me if there were any applications relating to the Bobby Moore Bridge (which is not an “address” which the planning website allows you to monitor), but received no notification. It now appears that the only person who has been consulted about the applications, made in mid-April, is a Council Officer in the Transportation Unit (‘Neighbours/Representees: 0 by email, 0 by post’).

There doesn’t appear to have been any reference to these applications in newspaper adverts about planning cases “of Public Interest”. When I visited the subway on Saturday, there were no “Planning Site Notices” about these applications displayed on any lamp post, railing or anywhere else in the vicinity. The only one I did find was a battered old notice, for a 2018 application in Brook Road, tied to a lamp post in Olympic Square. 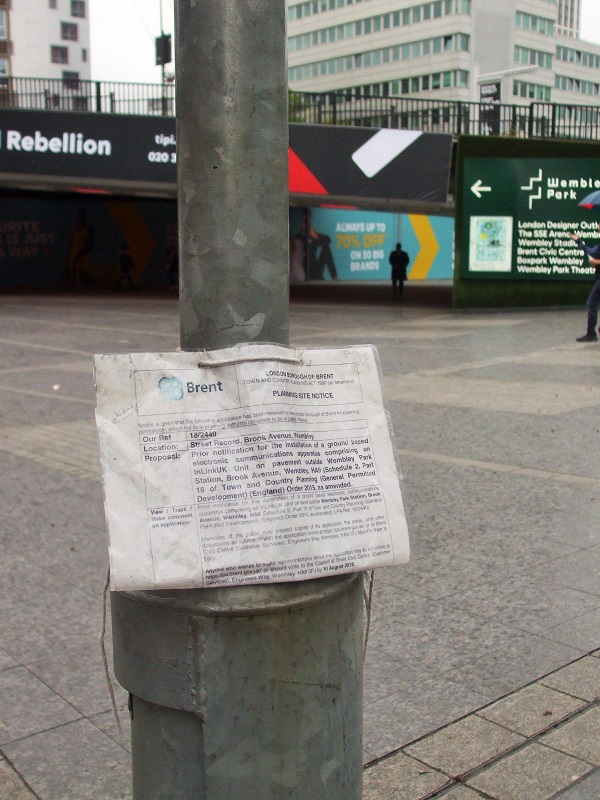 The only Brent planning notice in the vicinity of the Bobby Moore Bridge on 11 May 2019.

You could easily imagine that Brent’s planners do not want the public to know about these applications! But when I contacted the case officer dealing with one of them, I was told: ‘We would welcome your comments.’ That is good to know, and the Council will certainly receive some from me, in support of my objections to both applications. If you would be interested to know some of the comments I will be making, perhaps to assist you in making your own objections, please read on.

At the heart of objections to both applications are the tile murals themselves. They are an important, large scale, public work of art, specially commissioned by Brent Council and its partners to decorate the walls of this subway, in a way which showcases Wembley Park's heritage as "the Venue of Legends". They depict, in bright ceramic tiles, scenes from famous sporting and entertainment events at Wembley Stadium and Arena, and give a strong "sense of place" for both residents and the millions of visitors passing through the subway every year.

Brent’s adopted planning policy covering this location is the Wembley Area Action Plan. By seeking to cover up the tile murals, both applications go against the policies in Paras. 4.51 and 4.52 of that document, which set out the importance of public art to the area. The Plan also identifies Wembley Park Station as ‘a key gateway into the area’, and emphasises the importance of ‘a sense of arrival’. The Bobby Moore Bridge subway acts as that gateway in a literal sense, so that allowing any proposal to cover up the tile murals (which help to give that ‘sense of arrival’ at Wembley Park) breaches that planning policy as well.

Although my main concern is with the tile murals, I could not help noticing that 19/1387 also includes replacing the existing banner adverts above each end of the subway with new illuminated display screens. The top of proposed screens would be level with (or even slightly above) the top of the existing parapet balustrades. I measured the height of these balustrades during my “site visit”, and the top of them is 105cm above the pavement level. This would mean that a young child, or anyone else under around 110cm in height, or anyone in a pushchair or in some wheelchairs, would no longer be able to see the Stadium from the Bobby Moore Bridge. All they would see through the open balustrades would be the rear cladding of the screens, a few centimetres away.

The adverts above the south end of the Bobby Moore Bridge subway, as seen last Saturday, and as shown by the “white static visual” submitted as part of the applications.
I have written before about Brent Council’s commitment in the Wembley Area Action Plan to protect views of Wembley Stadium LINK . Planning policy WEM6 lists the protected views, which include the view of the National Stadium from: ‘7. The Bobby Moore Bridge’. The proposed new screens would deny that view to children and some disabled people, which is another reason why application 19/1387 should be refused.

'A local planning authority shall exercise its powers under these Regulations in the interests of amenity ....'

The Regulation goes on to say:

'… factors relevant to amenity include the general characteristics of the locality, including the presence of any feature of historic, architectural, cultural or similar interest.’

One of the main characteristics of the Bobby Moore Bridge subway is the presence on its walls of a large and colourful work of public art, depicting scenes of historic and cultural interest which reflect Wembley Park’s heritage as “the Venue of Legends”. As well as the tile pictures on the east wall, showing the 1948 Olympic Games (which Olympic Way gets its name from), football at the old Wembley Stadium, ice shows at the Arena, the record-breaking Michael Jackson stadium concerts and show jumping (the “Horse of the Year Show” was held at the Arena for many years), the west wall also has a variety of different sports and entertainment events depicted in the same mural style.

The tile murals on the east wall of the Bobby Moore Bridge subway (image courtesy of Julian Tollast).

It would not be 'in the interests of amenity' to allow any part of the tile murals to be hidden by the proposed illuminated advertising panels and their metal surrounds, so that Brent, as the local planning authority, has a duty to reject this application.

You might ask why these tile murals have been covered with vinyl adverts since 2013, if the case against advertising on the walls of the Bobby Moore Bridge subway is so strong? WHY INDEED! This is why:

Quintain’s original advertising consent application, 13/2987, was made in September 2013, seeking to display advertisements on the walls of the subway from 22 October 2013 until 21 October 2018. However, the application was not dealt with by Brent’s Planning Department until August 2017.

The planning case officer’s delegated report, dated 7 August 2017, concluded that ‘the [vinyl advertising] signage would have no impact on amenity.’ This conclusion was made because the case officer had not considered the existence of the tile murals on the walls of the subway at all!

It is possible that the planning officer who prepared the report was not even aware of the existence of this feature of historic and cultural significance, because the 2013 application documents did not mention the murals on the tiled walls of the subway, and those murals had been covered over with vinyl adverts, without consent (and therefore, unlawfully), since October 2013.

On the basis of the delegated report, Brent’s Head of Planning granted advertising consent on 25 August 2017 (not for the period applied for, but for 5 years from the date of consent).

It will not come as a surprise to you, when I say that I have little confidence that these applications would be properly dealt with if they are determined under ‘officer delegated powers’. That is why, since I first discovered the applications a few days ago, I have been trying to get them referred to Planning Committee, so that they can be considered and decided together in an open and transparent way.

There are several ways in which this could happen, including Planning Committee itself saying that it wishes to deal with the applications, or at least three councillors requesting that they are referred to that committee. I have made approaches on these, so far without a result.

The “safest” way to avoid these applications being decided behind closed doors is if: ‘8 or more written objections or a petition containing at least 51 signatures have been received, in accordance with the criteria* set out ….’

So please, if you agree with me that the Bobby Moore Bridge tile murals should not be covered over with illuminated panels and adverts, go onto the planning searches website LINK , enter the reference numbers 19/1387 and 19/1474, have a look at the applications, and submit your own written objections.

*These “criteria” are quite strict, and include that each objection ‘raises planning considerations that are material and related to the application,’ and ‘clearly states what is being objected to and gives reason(s) which are relevant planning considerations.’ An objection is only valid ‘if, in the opinion of the Strategic Director Regeneration and Environment or the Head of Planning, all of the criteria are met.’

On top of that: ‘Identical, similar or pro-forma letters or emails, which also meet all of the above criteria, will each be treated as a single signature in support of a petition and not as individual objections in their own right.’

Although you can use the reasons for objection that I have set out in this blog as a guide, please be careful to write any objection in your own words. Thank you, and good luck!