Why has Brent Council failed to protect the iconic view of Wembley Stadium? 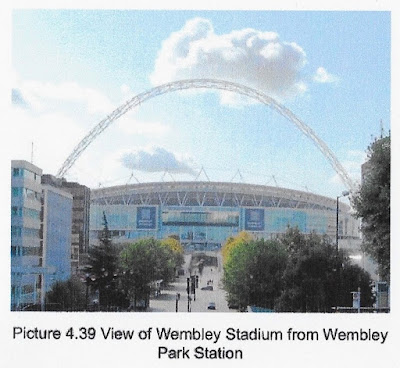 '...The council will therefore protect a range of short, middle and long distance views of the National Stadium.' 2015

Your article “Wembley Arch Vanishing?” (23 August) LINK makes a very important point about Brent Council’s lack of compliance with its own planning policies.
In January 2015, a meeting of Brent’s Full Council adopted the Wembley Area Action Plan, drawn up after public consultation, to be part of the policies which were supposed to be applied in deciding whether planning applications should be accepted. The action plan included a section on “Protection of Stadium Views”, with policy statements such as:

‘Views of the Stadium contribute a significant amount to the perception of Wembley as a whole, performing a range of functions that add a layer of depth to the visual experience of the area.’ and
’The council will therefore protect a range of short, middle and long distance views of the National Stadium.’

In the related section of the action plan on “Protecting the Special Character of Olympic Way”, the protection to be given was spelled out with further policy statements, including:

‘In line with policies WEM5 and WEM6, proposals for tall buildings must demonstrate that they have no adverse visual impacts on views of the stadium from Olympic Way.’ and (in policy WEM7)
’Proposed Development on Olympic Way must be carefully designed and scaled to respect the predominance of Wembley Stadium and its arch.’

Picture 4.39 (above) is an illustration from the 2015 action plan, showing the main view that these policies were supposed to protect. Unfortunately, the reality of what has been allowed to happen can be seen in a photograph which I took, from the same spot, in July 2018.
Brent has allowed many “minor” bites to be taken out of the view, by approving successive planning applications for tall buildings along Olympic Way over recent years, and there are more to come.
In June 2018, a report to Planning Committee, which approved changes to the plan for a tall block next to the Civic Centre, mentioned some of the earlier concessions made:

‘The top of the new tall building would obscure an additional small part of the stadium arch ....’ and
’Whilst the current proposals would slightly reduce the amount of the arch that is visible at present, this is not significantly more than the degree to which the Barratt and Unite housing schemes on the eastern side of Olympic Way infringe on the view of the arch from Olympic Way ....’

In July 2018, when recommending approval for a development by Network Homes of up to 21 stories, the planners said:

Brent Council should explain why it has allowed its own planning rules to be broken by its planners and Planning Committee, and why it has failed to protect the iconic view of Wembley Stadium, despite its promise to do so.
Philip Grant
Posted by Martin Francis at 10:03:00

As a footnote to my letter above, here is the Foreword to the 2015 Wembley Area Action Plan by Brent's then Lead Member for Housing and Regeneration, Councillor Margaret McLennan:

'The Wembley Area Action Plan is important in determining how Wembley develops over the next 15 years.The Plan builds on the council’s vision to develop Wembley as a destination which will help drive the economic regeneration of Brent, and further promote its cultural and leisure offer attracting visitors throughout the day and evening. It includes key planning objectives and policies and provides guidance for the development of over 30 sites in the Wembley area.

Our aim, reflected in the Plan, is to provide new homes, jobs and shopping and leisure facilities, whilst ensuring that important infrastructure and services, such as transport improvements and new schools, are delivered to meet the needs of local people.

At Brent we are committed to full community involvement in the important decisions that are made and particularly in bringing forward plans that are likely to affect the local community. As such, the Area Action Plan has informed by consultation through its development. Thank you to everyone who took the opportunity to participate in the process of drawing up the new plan.'

'At Brent we are committed to full community involvement in the important decisions that are made and particularly in bringing forward plans that are likely to affect the local community.'

In reality, this is what you get when you believe anything that Councillor Margaret McLennan says but there again she had a very good mentor in Mo Butt. What a well matched pair they are and what a disaster for Brent residents.

As I believe that local democracy is best served if we let our councillors know what we think on matters that concern us, I sent an email to the eight members of Brent's Planning Committee several days ago. Here is what I wrote:

'Dear Chair and members of the Planning Committee,

I was the author of a letter published in the "Brent & Kilburn Times" on Thursday, under the heading "Stadium view is vanishing". If you have not already seen and read my letter, it is on their website, but is more easily readable, with the two images which form part of it, at: [Link to this blog]

At the end of the letter are two very important questions:

Why has Brent Council allowed its own planning rules to be broken by its planners and Planning Committee?

Why has Brent Council failed to protect the iconic view of Wembley Stadium, despite its promise to do so?

'Members of the Planning Committee shall determine applications in accordance with the relevant planning national, strategic, local and neighbourhood policy framework, unless material considerations indicate [otherwise].'

'Members of the Planning Committee must take decisions in the public interest and take account only of material planning considerations.'

By comparing the two pictures in my letter, you can see how, over a short time, by allowing a succession of "small reductions" in the visibility of the stadium / arch, which Officers say are considered to be "acceptable", a policy adopted by Full Council in 2015 after public consultation (which continued a similar policy over the Stadium views) has been trashed.

The effect on the view of Wembley Stadium is only one of a number of examples in recent years where Planning Committee has agreed recommendations by Officers which go against local planning policies approved by the Council after public consultation. Last year Planning Committee agreed plans for a 26-storey block of flats in Alperton, when the Alperton Masterplan (another part of the local plans forming part of Brent's policy framework) said that only buildings up to 17-storeys tall would be appropriate for the area!

I hope you will consider carefully how you exercise your responsibilities as members of the Planning Committee, although for the iconic view of Wembley Stadium which Brent's policies were meant to protect, the damage has already been done.

Thank you for reading this, and my letter. Best wishes,

As yet, I have received no response from Cllr. Denselow, or any of the other members of Planning Committee.

As well as sharing my "Kilburn Times" letter with members of Brent's Planning Committee, I also wrote to Brent's Chief Executive. I said:

'I hope that Brent Council will explain to the people of the Borough why it has allowed its own planning rules to be broken, and why it has failed to protect the view of Wembley Stadium. I would invite you to send the answers on these points to the editor, Ramzy Alwakeel (with a copy to me for information, please).

Carolyn Downs has replied, noting the concerns I have raised, and saying:

'Your email has been forwarded to Alice Lester, Head of Planning for her attention and action. Alice will look into your concerns and endeavour to respond to you in due course.'

Any response I receive will, of course, be shared with the "Kilburn Times" and "Wembley Matters", so watch this space!

You can find Brent Council's response to my "Kilburn Times" letter, and my comments on it, in a blog posted on 2 October at: