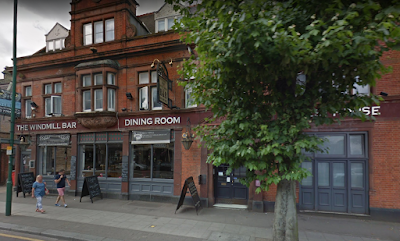 Brent Planning Committee will be deciding whether to approve planning permission for the Windmill Hotel, Cricklewood Broadway tomorrow. This involves the retention of the facade with redevelopment into 5 flats behind the facade as well as the retention of a pub. The pub garden would be converted into garden space for the flats.

However, members of the Committee may well be perplexed by the Officers' report...

Rather extraordinarily the officers seem to have been unable to establish whether the hotel has been used as a pub recently. Surely gathering evidence on that is a relatively simple matter?

1.6 It is claimed by the applicant that the bar at ground floor level has not been in use a public house since a fire in 2007, and has instead been mostly used as a lounge/breakfast area by hotel guests, with the bar occasionally rented out for private functions. The applicant has submitted a number of documents to demonstrate this including statutory declarations and company accounts. However this information does not correspond with other details that have been provided during the course of the application.
1.7 Officers acknowledge that there has been a strong interest from the local community in regards to the use of the premises at ground floor level, with numerous objections over the proposed loss of the ‘public house’ and questions raised over the validity of the evidence supplied by the applicant. A number of objectors have also claimed to have personally frequented the pub on occasions in the recent past
1.8 Regardless of whether the premises has been used as a public house or a breakfast bar within the last few years is not a determining factor to this proposal. It has not been demonstrated that the site does not accommodate a public house so policy DMP21 is relevant. However, this application does not propose to reduce the internal floor area of the public house premises. Planning applications from almost a decade ago (ref: 09/1456) show the size of the ‘pub’ being exactly the same size as the current proposal. The only loss to the pub with this scheme is to the beer garden at the rear, which is proposed to be transformed into private gardens.

I would think the loss of the beer garden, which I would see as an integral part of a pub, does not merit being described as the 'only loss' it is something that would contribute to the financial success of the enterprise.

There is more in a Supplementary report after the receipt of a further objection claiming that the bar had been open to the public recently and that the owners had not accepted offers to lease the pub. Officers comment:


It is quite possible (if not likely) that the bar has been open to the public - at least sporadically - until very recently. Moreover, there are sporadic responses on websites such as Trip Advisor from users of the hotel complaining about the bar being noisy, closed to the public and only open for private functions. However, as discussed in the committee report, the internal space for the pub is being retained within the site and a change of use is not proposed for the public house.