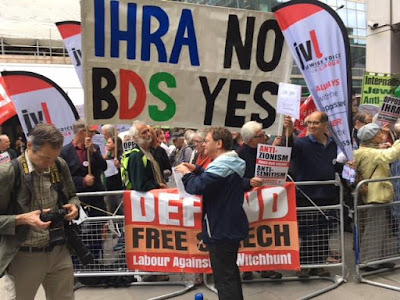 Brent Momentum is supporting the lobby of the Labour NEC today urging it not to adopt the full IHRA definition of anti-Semitism and its examples. The lobbying initiative was agreed at an emergency meeting organised by  Camden Momentum attended by more than a 100 people who were members of 17 Momentum groups.


No to IHRA, Yes to BDS
ALL WELCOME TO JOIN THE MASS LOBBY OF LABOUR’S NEC
where the IHRA definition of antisemitism and its examples will be discussed
from 9am, Tuesday, 4 September, 105 Victoria St, London SW1E 6QT
Camden Momentum has launched a petition calling for a vote of all Labour Party members on the issue.

IHRA: We the members must decide not the Israel lobby
SIGN THE PETITION

WE DEMAND
The members elected Jeremy Corbyn. The IHRA definition would return the party to the right which we voted down by a large majority – twice. Therefore, the members, not the NEC, nor the PLP, must decide whether or not to adopt the IHRA examples. We demand that the decision be put to a vote of all Labour Party members.
Background
This petition was agreed overwhelmingly on 20 August 2018 at an emergency meeting called by Camden Momentum and attended by over 110 members from 16 Momentum groups. Please sign and circulate widely.
We, members of the LP, elected Jeremy Corbyn leader because he is a socialist, an antiracist and stands for an ethical foreign policy based on human rights, including the rights of Palestinians living under Israeli apartheid.
Corbyn has been under mounting pressure from right-wing Labour MPs, Zionist organisations and the mainstream media determined to remove our elected leader, to adopt all the examples in the IHRA definition. The heads of Momentum and some unions, without consulting their members, have also accepted this.
Palestinians, other people of colour and other antiracists, including Jewish people who oppose Israeli apartheid, have said that the IHRA examples would censor Palestinians’ right to self-determination, criminalise the BDS movement and pose an existential threat to free speech on Israel.
In March 2018, a poll of Labour Party members found that 77% believe the charges of antisemitism in the Labour Party are ‘being deliberately exaggerated to damage Labour and Jeremy Corbyn, or to stifle criticism of Israel’.
Three pro-Israel newspapers, The Jewish Chronicle, the Jewish Telegraph and Jewish News, accuse Labour under Corbyn of ‘political antisemitism’ because it criticises Israel, the Jewish State. The three papers say, ‘Had the full IHRA definition with examples relating to Israel been approved, hundreds, if not thousands, of Labour and Momentum members would need to be expelled.’ This presumes that the LP must be purged of its Palestinian and pro-Palestinian members, including Jewish ones, and that the IHRA definition is a means to this end. Many Corbyn supporters have already been expelled, suspended or blocked from standing for office, and some have resigned.
The extreme right is on the ascendant in the Tory party, in Trump’s US, in Netanyahu’s Israel with the recent killing and maiming of unarmed Palestinian protesters and a new law institutionalising apartheid, and in Europe with a number of anti-immigrant, Islamophobic and antisemitic governments. Only a socialist Corbyn government and the movement it represents can stop the extreme right in the UK.
Momentum Camden

Jewish Voice for Labour have submitted a paper to the Labour Party Consultation on the definition of anti-Semitism HERE
Posted by Martin Francis at 09:57:00