The footage above shows fans exiting Wembley Stadium via the soon to be replaced pedway. It is a foregone conclusion that tomorrow (Wednesday) Brent Planning Committee will approve plans to demolish the pedway and replace it with steps - after all the plan was approved by the Brent Cabinet using £8.4m of Quintain's infrastructure payment to the council for a project which will benefit Quintain who claim steps will be more in keeping with their multi-million high rise empire.

The new steps will be of little benefit to Wembley residents who may well prefer the monies to be spent on repairing the borough's crumbling infrastrucure away from Wembley.

Apart from the steps themselves the project will also involve cutting in two the unadopted road, Perimeter Way, that runs beneath the pedway as the space beneath the steps, the under-croft, will be used for other purposes.

Two new roads, legs of Perimeter Way, will join up with Engineers Way: 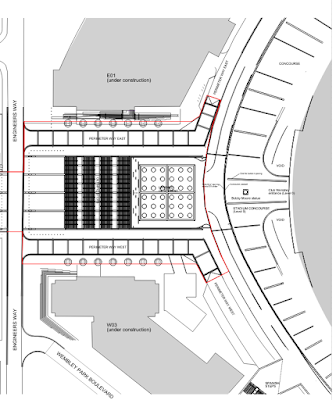 Quintain will be pleased with the officers' report which states about the pedway  (note passive voice):


It is considered to exhibit poor design and does not contribute positively to the character of the area and is therefore contrary to DMP1 of Brent’s Development Management Policies 2016. As such, its removal is considered acceptable in design terms.

They quote DDA requirements but of course it was not built when these were current:

The existing Pedway structure does not meet the principles of inclusive design, nor would it comply with current building regulations or the previous guidance as contained within the Disability Discrimination Act due to an unacceptably steep gradient.

Responding to claims that the pedway is safer than steps for those with restricted mobility they state:

The Crowd Movement Report is quoted as improving crowd control:

The report demonstrates that all current access is maintained and ease of movement at ground level (Level B2) is improved. The Olympic Steps work safely and efficiently for access, egress and evacuation from the Stadium. The assessments undertaken have shown that there is the capability to maintain the overall capacity of the system during ingress, egress and evacuation even with the reduction in the number of available channels at the stairs and head of stair barriers from 16 to 12, or an operational scenario where the Spanish Steps and Ginnels are unavailable. This is considered to be acceptable, and appropriate in the context of the application currently under consideration.

The proposed Olympic Steps would provide more resilience than the existing arrangement where it may be necessary to close all or part of the ramps to manage a situation where this is necessary, for example crowd separation or crowd control. There are also potential operational benefits in terms of ease of access and ability to segregate the incident from the remaining and/or other crowds. In summary, the replacement steps have been designed to maximise the safety of users of the staircase and is best suited to accommodate the arrival and departure of high pedestrian flows on event days.

The replacement of the pedway with steps will mean the closure of Engineers Way for two hours before and after stadium events:

The removal of the Pedway and its replacement with steps on the southern side of Engineers Way would mean that in future all pedestrians travelling to and from the Stadium on an event day would need to cross Engineers Way at carriageway level. This would in turn require Engineers Way to be closed for about two hours before all events as well as after events, as is currently the arrangement with Fulton Road.
This would result in all east-west routes across Wembley Park being closed for significantly longer periods of time than the current arrangement on Stadium event days. At present, the closure of all three east-west routes is only required at the end of events (except for NFL American Football events). In general, this is for a 60-90 minute period towards the end of the afternoon at weekends (for afternoon sporting fixtures) or at night for evening sporting fixtures or concerts.

More inconvenience for residents but the report promises respite when North End Road is eventually reconnected with Bridge Road:

The transport infrastructure improvements proposed are a new road connection between the western end of North End Road and Bridge Road (opposite Wembley Park station) for use by traffic and pedestrians. This would be achieved by removing pedestrian steps and ramps between North End Road and Bridge Road and by raising the level of the road over a distance of about 60m.
The future proposed scheme means that on Wembley Stadium event days there would be a replacement east-west route across the Wembley Stadium area that does not cross Olympic Way and therefore would not need to be closed to maintain pedestrian and crowd safety.
Brent Council has financially committed to delivering an east-west route through the North End Road connection which would therefore further support the road network on event days.
Local residents and businesses would therefore have an alternative route that could remain open throughout an event day to allow them access to and from their properties. In addition to this, bus routes 92 and 206 would not need to divert completely away from Wembley when events are taking place. The applicant has confirmed that there will be ongoing communications with Transport for London to facilitate where the diverted buses will alight.
It is worth noting that if there are possible delays with the delivery of the North End Road connection, the modelling that has been provided demonstrates a worst case scenario of a weekday evening peak hour. The road network would be less affected at the weekend as the volume of traffic associated with businesses in the Wembley Industrial Area would be far lower and the residential traffic would naturally be more evenly spread across the day.

North End Road may be a bit of a nightmare on event days for residents of Empire Court and Danes Court so what will all this do for/to other local people as they try and move around the borough on event days?

Bridge Road would amount to less than 30 seconds, whilst along Harrow Road between North Circular Road and Wembley Hill Road a delay of between 45 seconds to 1-1⁄2 minutes would be added to journey times. This is not expected to cause detrimental inconvenience to residents or drastically increase the potential traffic.
Following the submission of the addendum to the modelling, the impacts on Harrow Road and Forty Lane corridors are likely to be less pronounced than had previously been assumed, partly due to traffic being delayed along the Great Central Way corridor and partly due to traffic redistributing itself over a wider area to avoid congestion close to the Stadium.
Flows along Harrow Road are therefore forecast to barely change, largely due to the road being congested already. Traffic diverted away from Engineers Way looking to travel to the southwest would therefore look for a less congested route.
The modelling also shows that roads to the west of the Stadium would experience a reduction in traffic flows and an improvement in traffic conditions as a result of the closure. Most notably, Empire Way and Wembley High Road would see significant falls in traffic flow as traffic cannot travel west from Engineers Way and this would cut journey times along the Empire Way corridor by up to 30 seconds.
The North Circular Road corridor including Great Central Way and St Raphael’s Way would experience temporary congestion and delays on event days, however, the proposed North End Road connection would alleviate any concerns over traffic in these areas.
The Head of Highways & Infrastructure has accepted that the predicted additional disruption to the highway network on Wembley Stadium Event Days can be accepted for the temporary period before the delivery of the North End Road connection. The road network will be managed as well as possible during the interim to minimise inconvenience and delay to local residents and businesses, until such time as the North End Road scheme is delivered.

Stupidity personified. Still not worked out why Brent Council want to give Quintain their money back!!!! Someone mentioned a swimming pool.

Partly it was an agreement in exchange that Quintain would not build on the site next to the Civic Centre for which they already had planning permission. Brent Council wanted a public square next to the side of the CC when they realised how boxed in by new build it was becoming. Of course they had approved the plan s for new build so should have known that. I have covered the proposed public square elsewhere on this blog.

Apart from he scandal of the mis-use of infrastructure levy money for non-public infrastructure, the other big issue here is that North End Road under these plans will become a new rat-run, generating extra traffic in the area, concentrated at a new intersection just where people access Wembley Park Station. North End Road provides the only access to the cycle and pedestrian route of the Brent River Path. Where is the consideration of cycling in this report? There appears to be none. A practical and safe cycle route separated from both motor traffic and large pedestrian flows is needed from Wembley Park Station and Bridge Road to the Brent River, but there is no sign of such a thing being accommodated, or even considered in these plans. This is shocking.

I agree. I have been suprised at the lack of reaction from residents of North End Road to plans that will make their street a rat-run.

It seems odd that Labour Councillors are happy to hand over many millions of public money for this project and while failing to repair the dangerous pavements in Wembley High Road and many residential streets in the area around the Stadium. The amount handed over to the 'private' works around the stadium are 5 times as big as the Council's capital budget for repairs to roads and pavements throughout the whole of Brent. Surely the wrong priorities and a kick in the teeth for local residents.

How could anyone think it's a good idea to add a major junction right outside a school and busy bus stop? The new rat run will also endanger students whose properties exit directly onto north end road. This will likely result in yet more loss of parking for local residents in an already (and continuing to get) overcrowded area!

Aside from the disruption of the new road the plans for the new entrance to wembley is also upsetting. The current entrance is iconic, access friendly and inclusive not separating those with mobility issues.