Has Duffy been vindicated on Paddington Cemetery asbestos? 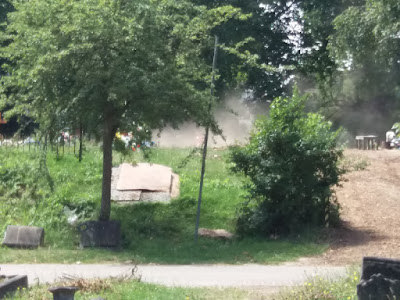 Regular readers will know of the dogged campaign by ex Cllr John Duffy on the issue of asbestos at Paddington Cemetery. A search on this blog (right hand column) will bring up many articles including this.

Duffy eventually resigned the Labour whip in frustration at his efforts to reveal the true facts being rebuffed, undermined and ridiculed by the Labour leadership and officers who minimised any risk from asbestos contamination. Duffy stood as an independent in the council election in May but was not elected.

Now it has been revealed that in addition to Brent Council back-filling the ex-mound that contained asbestos they are installing concrete 'coffin liners' in the ground to facilitate burials. Apparently each liner will take two coffins and there are estimates that between 100 and 200 liners will be installed.

Clearly all this is very expensive and will not have been ordered unless there was a very real issue to be dealt with.

Meanwhile I understand that John Duffy has approached the District Auditor requesting an investigation of the illegal dumping of asbestos.