Standing together against racism and Islamophobia in Dollis Hill

Local people, including members of North West London Stand Up To Racism, received a warm welcome tonight at the Al-Majlis and Al- Hussaini Centre in Dollis Hill when they visited to express support and solidarity after the previous night's attack. The Chair and Secretary of Brent Trades Council were amongst the visitors.

The group were invited in to share in the celebrations and the atmosphere was positive with clear determination that such episodes would not be allowed to divide the community.

I was struck particularly by a very articulate lower secondary boy who was keen to explain his faith and at the same time emphasise his respect for all religions by explaining the meaning of the slogan on his T-shirt. 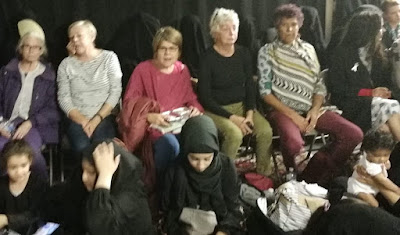 Women visitors were welcomed with  food and sweets and speeches were made thanking them for their support.

There was a low-key police presence at the Centre in Edgware Road as well as effective stewarding by the Centre itself.

Earlier Brent Council had issued this statement from Cllr Muhammed Butt, leader of the council:


Our thoughts and prayers are with those who have been injured and all those affected by the serious act of violence which took place outside the Al-majlis Al-Hussaini Center last night.

We are in close contact with the police who are looking into this as a possible hate crime. However, we are reassured that the police do not believe there is an ongoing threat to Brent's Muslim community. There is absolutely no place for hate in our borough. Violence like this will not be tolerated.

We visited representatives at the centre this afternoon and will give them all the help they need.

Brent has one of the most diverse communities in the UK and we are extremely proud of this. We will not allow cowardly acts like this to spread fear and hate amongst our residents.

For once, I agree entirely with Cllr. Muhammed Butt.