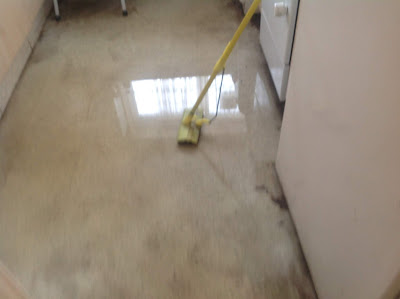 Since this article was published a Brent housing officer has been in contact with John regarding his situation and has said she wants to arrange an appointment to restore power to his flat. No date yet. It has emerged that the flooding source is a different flat to the one first suspected.

John Healy, a Brent Council tenant in South Kilburn, has been left having to put on wellies to wade through his flooded kitchen after Wates, Brent Council Housing's out-sourced repair service, deemed the flat that was the source of the flooding unsafe for their employees to enter as the tenant is 'too dangerous.'

John has been waiting for action since last Wednesday. He told Wembley Matters:


Because of the flood in my kitchen, I have been left with no lights, heating, hot water microwave and worst of all having to throw out all of the from my full fridge that has gone off, as there is no power for it along with everything else. I have to put on wellies to enter the kitchen because there is so much water on the floor.

I informed them that I am a disabled 67 year old man with a mobility impairment and I was worried about slipping on my saturated carpets. This did happen but fortunately I was not injured.

Brent Council Housing's mission statement says 'A better experience for residents' unfortunately for be it is ' a bitter experience'. They say they are 'taking a holistic experience with Wates', for me it is more like 'taking the **** approach.'

John visited the South Kilburn repair office yesterday and was told they were dealing with source of the leak but in the evening Wates called in on John with a security officer and told him they could not enter the flat which is the source of the flat. His power cannot be restored because of the flooding.

The Wates officer suggested John  was entitled to be accommodated in bed and breakfast by Brent Council until the issue has been dealt with but the Council has not offered this option. He has submitted a complaint to the Council but this could take up to 20 days to be dealt with.

Wembley Matters has requested a comment from Brent Council.