Guest post by Philip Grant in a personal capacity. Wembley Matters wrote about the murals in January 2018 when Brent Council signed a 4 year contract with Wembley City Estate Management  to continue to erect advertising over the murals LINK. As Green Party candidate for Tokyngton ward I have no hesitation in supporting the restoration of the tiles for public view and hope candidates from other parties will also support. When taking primary pupils on a Discover the River Brent walk, starting at Wembley Park and following the Wealdstone Brook to its confluence with the Brent, I used to begin with a tour of the murals - part of our local history.


I am not writing about THAT sort of cover-up (this time), but a request made by Wembley History Society that Brent and Quintain should stop covering over the tile murals, which decorate the walls of the Bobby Moore Bridge subway at Wembley Park, with advertisements.

The subway was part of Brent’s improvements, to pedestrianize Olympic Way ahead of the Euro 1996 football tournament. Its £6m cost was split between the Council, the Department of Transport, Wembley Stadium Ltd and the Football Trust. Brent’s Environmental Services Committee named it “The Bobby Moore Bridge”, after England’s 1966 World Cup-winning football captain, who had recently died of cancer. It was opened by his widow, Stephanie Moore, in September 1993, and the plaque she unveiled is set into the mural commemorating the 1966 final. 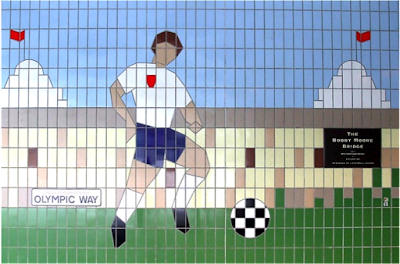 The tile murals which decorate the walls of the subway, and the fact that they have been covered up with advertisements (mainly for Quintain’s commercial activities, such as the London Designer Outlet or Tipi rental apartments – see below) for the past few years, were part of my “The Olympic Way Story” local history talk in March. After that meeting, several members asked whether there was anything Wembley History Society could do to restore these murals to public view. As the Society’s A.G.M. was to be held in April, it was decided to put a motion on the subject for discussion at that meeting. 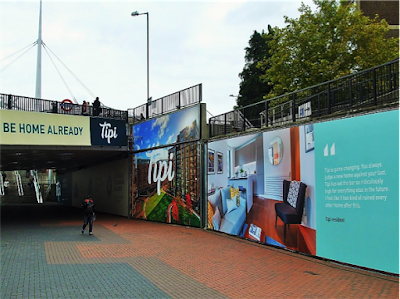 At its A.G.M. on 20 April, Wembley History Society unanimously passed the following motion:

‘Wembley History Society calls upon Brent Council and Quintain to return the tile murals, on the walls of the Bobby Moore Bridge subway, to permanent public view, as part of the current public realm enhancements for Olympic Way.

The Society’s members feel strongly that these murals, depicting scenes from famous sports and entertainment events at Wembley Stadium and Arena, are an important part of the heritage of Wembley Park, and add to its sense of place.

The tile murals should be uncovered, and displayed again for both residents and visitors to see and enjoy, not hidden behind advertisements as they have been in recent years.’

After the meeting, letters in support of this motion were sent by the Society to Carolyn Downs at Brent Council (see copy attached) and to James Saunders, Quintain’s Chief Operating Officer. The letter to Brent made the point that ‘these murals are part of “Brent’s own rich history”, and should play their part in welcoming visitors to Wembley Park as part of the London Borough of Culture 2020 celebrations, while the letter to Quintain also said:

‘Quintain has promoted its developments as “drawing on the rich heritage” of Wembley Park, and our Society has been pleased to work with your company on local history matters, such as putting one of the lion heads from the Palace of Industry building on permanent public display in 2014, to celebrate the 90th anniversary of the British Empire Exhibition. Reinstating the murals to public view, as part of the public realm enhancements currently underway, would be an excellent way to showcase the sporting and entertainment heritage of this area.’

Here are a few more visual examples, showing how some of the scenes displayed by the tile murals celebrate events which have taken place at Wembley’s “Venue of Legends”: 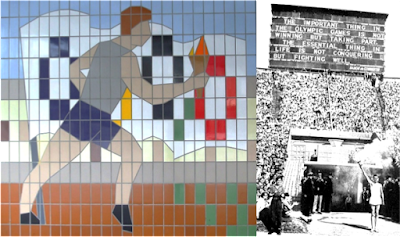 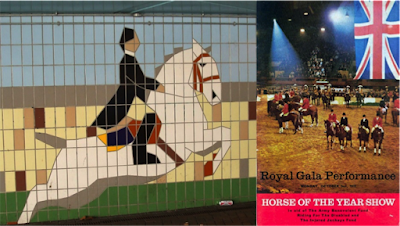 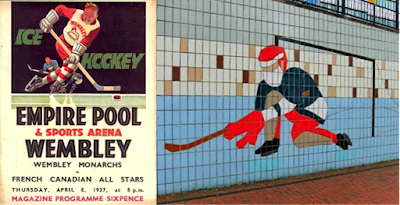 Wembley History Society is a non-political charity, set up in 1952 at the invitation of the Mayor of Wembley, to study and promote public interest in the history of Wembley, and to encourage others to preserve all things of historic interest for the benefit of the people of Wembley. The motion the Society has passed is not party political, and I hope that candidates from all parties in the local elections can support it, and that all Brent councillors elected on 3 May will see that it is put into effect.

The “Brent & Kilburn Times” has already covered this story online LINK  Although, as far as I know, the Society has only received an acknowledgement of its letter to the Chief Executive, their report says:

‘A Brent Council spokesman said: “The council currently has an agreement in place with Quintain which allows advertising on Bobby Moore Bridge and this income helps to protect vital public services. We will discuss options to make the murals available for visitors to enjoy with the Wembley History Society and other interested parties.”

When Brent made its agreement with Quintain to allow this advertising, how much money it receives from them, and which ‘vital public services’ this income protects are questions that someone may care to ask. The key question, as far as I and my fellow W.H.S. members are concerned, is why should this major piece of public artwork, paid for, at least in part, by Brent’s Council Tax-payers, and celebrating scenes from the history of sporting and entertainment events at Wembley, be covered up at all?

Our answer is that it is part of Brent’s heritage, and should not be used as an advertising hoarding, by Quintain or anyone else. The tile murals should be restored to public view, permanently, for the enjoyment of local residents and visitors to Wembley Park.

After all, when Brent committed up to £17.8m of CIL money towards the Olympic Way public realm enhancements last year, it promised not more advertising but:

‘… a world class public realm for enjoyment by Brent residents’;
‘… a high quality processional route for the millions of visitors to Wembley’ that would,
‘… at other times be a place to visit in its own right, hosting cultural events’; and that
‘… improved public realm has a key role in place-making’.

Philip Grant (writing as an individual).