A moving story that shows why Sufra deserves your support

Sufra is so much more than just a foodbank. This is an extract from their most recent Newsletter: 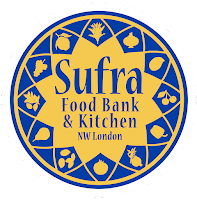 Abaeze, his wife and 2 sons, aged 9 and 13, sat in our office for 4 hours. Throughout, the mother sobbed. The family are asylum seekers and had overspent on the goodwill of a local taxi driver who had been housing them for the past 8 months. In the morning, he dropped them off at the Food Bank and pointed to Ibrahim saying, “They’ll help you.”

This is not an unusual occurrence. Sufra NW London, which celebrates its fifth anniversary this year, was never just a Food Bank. We’re an all-encompassing safety net for everyone and anyone who can’t get the help they need. As asylum seekers, Abaeze and his family are not eligible for benefits and he is not allowed to work. If caught working, he could be deported immediately.

As Ibrahim made the usual raft of calls trying to find every possible avenue of support, I looked on as the hours passed by without any resolution. Every ounce of dignity had been stripped away from this family, and the sight of the inconsolable, sobbing mother was disturbing. And incredibly distracting. First I offered tea and coffee, but they refused. When Fahim arrived with a delivery of fruit, I asked if they wanted some. Shyly, Abaeze said no. I packed them a bag anyway and asked Abaeze to keep it with him just in case, in the hope that they would be tempted to look through the bag and eat something when I wasn’t looking.

In some ways it was a pathetic gesture. The family was homeless and I was offering oranges and bananas.
As the working day came to a close without any prospect of finding housing, I turned to Ibrahim and said, “Book them a hotel.”

”But you said there was no money,” he asked.

Whilst it is true that our emergency aid budget currently stands at zero, I told him to go ahead.

”The money will come. We’ll put out an appeal on social media.”

As the family made their way out of the office, Abaeze came to me and hugged me. And he wouldn’t let go. “Thank you”, he kept muttering. I was embarrassed.

Fast forward 8 days, Abaeze and his family now live in temporary accommodation in Kilburn. By profession, Abaeze is a chef and he’s already started volunteering at Sufra NW London. But without the right to work and no entitlement to benefits, he will be reliant on the Food Bank for months to come. Maybe longer.

There will be some that judge Abaeze when he gets a dodgy job washing dishes at a restaurant paying cash in hand. It’s inevitable. But there is something utterly unforgivable about the way our country treats asylum seekers fleeing conflict or persecution, and that policy has persisted across governments of all political persuasions.

”Maybe they’re economic migrants...” some might question. But what if they’re not? I’ve known people who have lived in this limbo for 4 or 5 years. No one would put themselves through the trauma of leaving their home country and all their possessions, unless he or she truly believes they have no alternative.

To make a donation towards our Refugee Resettlement Programme, click here.
HERE