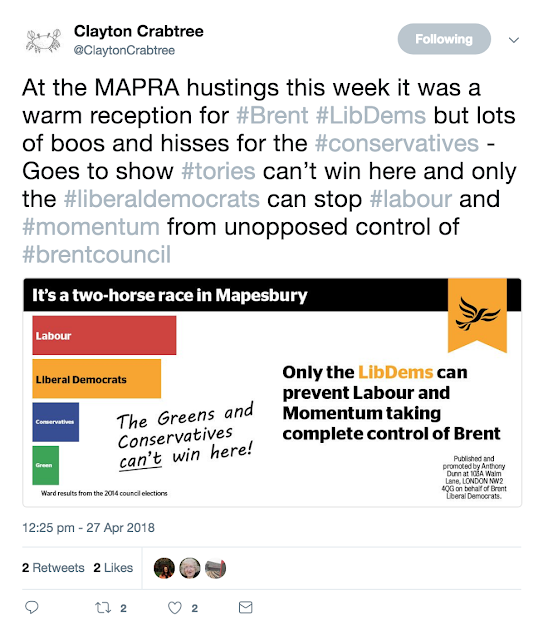 Bar charts on election literature are notorious for beiing 'a but dodgy' to say the least and are usually accompanied by 'Only XParty can win here!' or 'XParty can't win here'. The above from the Liberal Democrats is a good example with the added spice of a bit of 'red scare' propagands citing a potential Momentum 'control of Brent'.  On my reckoning there are only at the most two true Momentum supporters in the 63 strong Labout list. Furthermore, in my personal opinion, they would add a coorrective to the managerialist approach of the majority of Labour candidates.

So anyway how did the Lib Dems arrive at their bar chart?

They have added up the total votes of each party in the 2014 council election in the ward. As Greens fielded only one candidate and the others three each this puts Greens at the bottom below the Tories.

If, however, you list the candidates' individual results it gives a different picture  (from Brent Council website election results page): 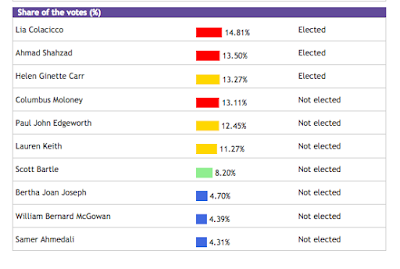 The Green candidate vote was well above that of each of the three Conservative candidates and only 3% behind the lowest Liberal Democrat candidate.

This time round there are three Green candidates so a more representative bar chart could be made from May 3rd's results.

Meanwhile, as I said to a woman outside Willesden Green Sainsbury's yesterday, 'Yes, the Greens can win in Mapesbury.'

I should have added that the former Lib Dem councillor, turned Independent, for Mapesbury has said that she wants to see Greens on Brent Council.

The reality is that in Mapesbury the last result proves that the contest is between Labour and the Liberal Democrats. There were 2 Labour and 1 Liberal Democrat elected in 2014. Voting either Conservative and Green in these kind of contests simply hands the seat to Labour. This is how Labour achieved 90% of the Brent seats in 2014 on just around 50% of the votes. Clearly in any place where the Greens came 2nd sensible tactical voting will enable the Greens to beat Labour. The message across Brent is that simple - if you don't want a Labour Dictatorship and stupid decisions like the Labour £17.8 million give away for the unwanted Wembley Stadium steps - then vote TACTICALLY for the Party best positioned to beat Labour. In places like Dollis Hill, Mapesbury, Sudbury, Alperton, Wembley Central and many others it is currently the Liberal Democrats who are best placed to beat Labour.

I think the result from last time with 2 Labour and 1 Liberal Democrat Councillor elected the figures speak for themselves.

The people with the best chance of beating Labour are tose who clearly came 2nd last time. In Dollis Hill, Sudbury, Wembley Central, Alperton, and many others, including Mapesbury, the best placed people to beat Labour ate the Liberal Democrats. Voting Conservative or Green simply hands the seat to Labour.

This is why Labour managed to get 90% of the seats in Brent last time on just 50% of the vote.

Clearly any place where the Greens came second it is the Greens with the best chance.

So if people do not want a Labour Dictatorship they need to think about voting tactically for the Party best placed to beat Labour - in many places in Brent it is clearly the Liberal Democrats.

Voting tactically helps to avoid splitting the vote and defeating Labour in places like Dollis Hill, Sudbury etc etc will help to stop the stupid Labour decision to hand over £17.8 million of our money to a private developer for the steps to Wembley Stsdium that no one wants.

Here's where we disagree Paul, because as you are aware there is a large shadow hanging over the Liberal Democrats that the party has, as of yet, been unable to shift.

Nationally this shadow emerged as a result of the coalition, broken promises and acting in ways that were neither Liberal or Democratic. We still have an unfair voting system as the Liberal Democrats failed on their pledges to fix it.

Locally, we had Sarah Teather, granted a MP who I'm sure acted with integrity to her own personal beliefs, yet violated the core ethos of what the public expected from people who claimed to be 'Liberal and democrat'.

Understandably, people can't forget the most prominent Liberal Democrat in this local area, who was elected on her anti war stance, voting for military involvement in Afghanistan and Libya. A 'liberal democrat' who voted against Gay Rights and sough to deny same sex couples the right to Marry. A 'liberal democrat' who imposed a racist policy to criminalise the (mostly) Somali community for their use of Khat. Despite, 'liberal democrats' supposedly being for decriminalisation of drugs and considering health interventions more appropriate.

Then we have the issue of the Lib Dem grouping you led effectively quitting council and not bothering to turn up. Local people have not forgot.

It's not just the infamous example of Lib Dem Cllr Rev David Clues of Dudden Hill moving to Brighton, refusing to step down and being tracked down their by one of his residents. In Willesden Green, Gavin Sneddon moved away and quit attending council. It's people like Dollis Hill's Javaid Ashraf who missed half of his responsibilites despite being chairman of two committees & earning £4,777 extra per year on top of his councillor’s allowance - who resulted in hard working people like Alison Hopkins losing their seats.

Meanwhile, as we've discussed in the past, it was your front page response in the Brent and Kilburn times that inspired me to join The Green Party - because describing going as 'pointless' clearly set a bad example for Chris Leaman and Hayley Matthews as they effectively quit. As a resident of Mapesbury where these two people were meant to represent me, I was outraged.

Through standing as a candidate for The Green Party in 2014, not only was I able to prevent 2 Liberal Democrats getting elected in Mapesbury (As residents understood there was no point in an extra 2 anyway, as they didn't turn up) but I came within 5% vote share of getting elected. This time in Mapesbury, with 3 Green candidates standing, people won't have to split their ballot, resulting in less votes going to other parties and helping us to close that 5% gap.

Dr Helen Carr, the one candidate who was elected as a Liberal Democrat felt (for whatever reasons) that she could only represent Mapesbury as an independent.
This means that the Liberal Democrats effectively quit Mapesbury twice.

It's noteworthy that Helen Carr, your most recently elected Liberal Democrat has endorsed The Green Party as the best alternative for the council (see her farewell speech here: https://wembleymatters.blogspot.co.uk/2018/04/helen-carr-thank-you-and-goodnight.html). The public we've spoken to in Mapesbury overt he past four years are doing the same.

Which as we can see the idea that 'those who came 2nd last time stand the best chance' of getting elected, is far from the case. Particularly, as it is only two wards you mention - Dollis Hill and Sudbury, that the Lib Dems have been active.

The Green Party isn't out to 'pretend' to the public and has fielded strong and active candidates in the wards where we believe we can win seats.

The quality of the air we breathe, the condition of housing, pavements, potholes, vandalism, crime and litter are all environmental issues.

Under-estimate us at your peril : )

In Mapesbury:
Greens won almost double the votes of Conservatives in 2014
Lib Dems have quit on Cricklewood & Mapesbury TWICE.
In 2014 Lib Dems had the worst attendance at the council.
In 2016 Cllr Helen Carr was so disillusioned by Lib Dems she felt she could do a better job as an Independent Cllr.
Greens are just 5% of the vote away from winning here!

This could get rather tedious so I will close comments at 2-2!