Residents of Forum House and Quadrant Court, two of the first Quintain developments at Wembley Park face service charges of 47% according to well informed sources. First Port who manage the development spokesperson  denied the figure this morning and told me that the increases were actually 2.7% for Forum House and 5.1% for Quadrant Court.  He added that First Port had only been agents since April 2017 and the amount depended on what baseline was being used.

Forum House is presently undergoing works for removal and replacement of cladding following the Grenfell fire but the spokesman said that as the buildings were also most 10 years old that maintenance  would be needed anyway.

Forum and Quadrant are different from the later Tipi developments in that they are mixed tenure including housing provided by Genesis and Family Mosaic.  Clearly the increases will be less affordable for housing association tenants.  There are fears that the increases have been made to bring charges in line with Quintain's latest developments.

First Port is holding a site surgery today and in apparent contradiction of the spokesperson admit that the increase is 'significant' this year. I have sought clarification from First Port. The discrepancy may be due to the fact that First Port is switching from a financial year budget to a calendar year, charging 5% more during the period of adjustment for only a 9 month period. 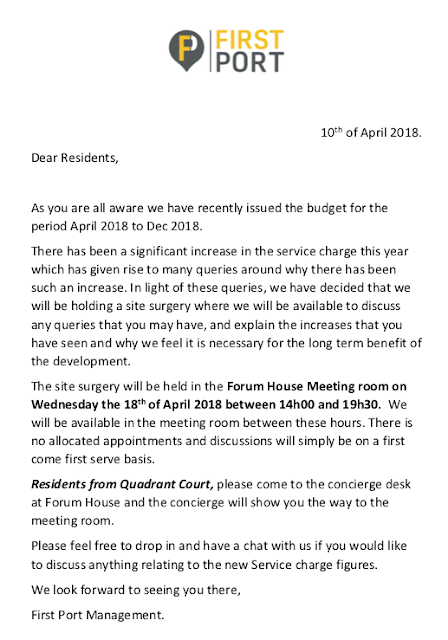 The Development Manager of the develpment meanwhile does not seem to deny the extent of the  service charge increase but justifies it on the following grounds:

We are adjusting the budget to the real expenses of the development and the necessary works that have to be carried out as per examples below:

-          Fire equipment: A provision for ad hoc works including a replacement of the fire panel, replacement of fire doors and magnetic locks. As these are required ad hoc works for this year only so we anticipate a lowering of this cost line year.
-          Electricity: This budget is previous years metered usage, however we have now procured a contracted rate through First Port bulk purchasing. We will be able to achieve rates which are well below normal domestic rates and highly competitive against commercial tariffs. We have carried out a comprehensive assessment of the lighting on site and were aiming to replace current lighting with LED equivalents as part of the major works being carried out in order to reduce energy costs over the long term. Due to funding we are unfortunately unable to do this at present, however it will be undertaken in the near future.
-          Reserves: We plan to appoint a chartered surveyor to carry out a detailed Asset Management Plan for the development to ensure that future annual collections are set at sufficient levels to fully provide for all future major works and that collections are allocated to the correct schedules. We have however budgeted for an estimated required amount to be allocated to reserve funds.
-          Cleaning external areas: This is budgeted in for inner court yard cleaning, including all paving, section walls inside, steps etc. (steam and chemical). Also perimeter clean outside areas including pavement sections, plant surrounds, reception entrance.
-          Window cleaning: We have made provision for the external cleaning of windows and balconies throughout the development. This has not been budgeted previously but is needed enhancement that will deliver a much improved appearance to the scheme.
-          Building, Terrorism, Property Owner Liability Insurance: Provision for insurance for period 30 Sept 2018 to December 2018. This has previously been separately recharged to residents in the form of an additional levy.
-          Lifts: We have based our budget figure on actual previous expenditure allowing for 4 passenger lifts, this covers the relevant maintenance contracts, lift telephone lines, lift insurance and ad-hoc repairs should they be required. Our budget allows for our premium service lift contract which we are able to procure at a lower than usual rate via the Quintain Wembley wide agreement. This also incorporates the outstanding aesthetic repairs to all lifts.
-          Ground maintenance: We have allowed for a provision for an annual grounds maintenance contract and the regular  maintenance of the irrigation system as well as improvements to the landscaping in the budget.

Sorry, Martin. Not clear where the 47% comes from?

Yers that's why I was waiting for an official statement from First Port. A resident says: 'The budget might be 5% higher than last years. But because it only covers 9 months rather than 12 - the impact is a 47% increase in what we are charged. The mood at the meeting was angry and insurrectionary! They took a verbal battering from angry residents. At no point did they dispute the 47% figure - they’ve undertaken to write to residents but they must be on the back foot.'