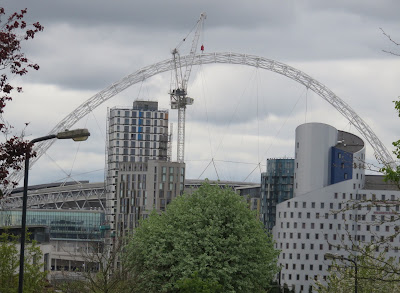 Following a discussion on  the Next Door forum LINK Gary Holmyard has given me permission to adapt his comments for a Guest Post on Wembley Matters. Publication does not imply approval of all Gary's comments but is aimed at stimulating wider debate.

Yesterday’s news was all about Wembley Stadium potentially being sold to Shahid Khan as the home ground for the Jacksonville Jaguars.... I for one can only think that this is going to cause continual chaos on our roads and surrounding infrastructure, increased littering, traffic jams, while the coffers of the stadium owners increase... residents never have a say, we bought our houses and chose to live here when it was a National Stadium with occasional matches and concerts, now we are subjected to weekly or bi-weekly games disrupting our every day lives and movements.

Had I chosen to live near White Hart Lane or Highbury, then I would have no cause to complain, but I didn’t... and when the old twin towers stadium was demolished to make way for the new national stadium it was, in essence, a like-for-like replacement. This will be permanent, on top of the 1,000’s of flats being built I cannot help but believe that this is total overkill, and the companies, council and developers are milking every square inch of ground to make money for themselves and not caring about the people who actually have to live here.

My family have been resident for over 20 years… way before any total redevelopment plans were even on the table, so we did not move to the area to make money in the hope that our property would rise in value, and could move on to somewhere else. We moved here because we liked the area and it’s location for getting into town / access to motorways etc. We have spent that time working hard on our house and garden getting it to how we want, and to move now would be an enormous upheaval, and would involve finding new schools, work place consideration etc, so yes, I accept that property prices have increased, but do not agree that the only solution is to move.

Wembley still could be a wonderful place to live, if only developers and councils had long term thinking of how it all comes together. I am all for bring trade into an area, being an ex-restaurateur in Wembley Park myself, I am aware more than most as to the additional revenue match days can bring, however, I am also aware that regular clientele were turned off from travelling as they cannot park anywhere unless they want to fork out £10, £20 or £30.

My biggest concern is not so much how many flats are being built, or matches that are played, but the actual infrastructure that is not being updated / adapted to suit the additional thousands of new residents coming into the area, on top of weekly / bi-weekly matches being held at the stadium. On a normal Saturday afternoons the Harrow Road from the A406 towards Wembley is one continual queue due to matches being played and / or LDO shoppers, locals trying to go home of course compounds this!

To relieve some of the queues, it would make sense to lift the time restrictions on the bus lanes to peak times only to allow traffic to flow that more easily, plus encourage people to return to the LDO instead of saying ‘never again’! I am all for one for traffic control but with another 5,000 homes planned between now and 2020 (from wembleypark.com) this problem is going to manifest into complete meltdown. With 1,000’s of new jobs created, PLUS 1,000’s of new residents (11,500 total flats envisaged if I am not mistaken in total) it does not take long to work out the additional traffic and people movements each and every day, on top of those visiting the stadium, LDO and SSE arena.

We as locals are used to avoid peak times on event days, but it could potentially be that every day could be like an event day with the amount of additional people coming / leaving the area each day. If each flat houses 3-4 people, that is 34-46,000 people, if a quarter of those use a car, that is almost 10,000 additional car movements each day. If half go to school or work, that is around 20,000 people movements each day. This is every day, and excludes LDO shoppers and employees! I have also noticed the re-timing of the traffic lights since the LED types have been installed these have compounded the problem! A total re-think of the Harrow Road, and A406 trunk roads needs to be carried out. I know parking restrictions for event days are in place to encourage people to use public transport but we are not talking about event days, but each and every day.

SOLUTION: Have Park and Ride schemes been considered? Bicester village and many others have such a scheme, which eliminates traffic problems in the village yet gets shoppers into the shopping areas quickly and safely. The two high rises at the Harrow Road / A406 junction have been empty for many years and is the first thing that new shoppers see when visiting Wembley! If these two monstrosities were two multi storey car parks with a Park ‘n Ride scheme (with a minimal cost to the customer) it would eliminate the vast majority of congestion on the Harrow Road at a stroke! The scheme would be open for shoppers as well as football / concert goers and would enable traffic to disperse EASILY and QUICKLY at the end of a match or concert instead of all the road closures and coned re-directions that currently happens and make traffic dispersal ten times worse!

If people paid less for this scheme than parking in the car parks nearer to the “event” then this would encourage people to use it. I am sure that there would be many companies willing to sponsor the scheme also thus brining in even more revenue! I am confident that not only would this suggestion work, it would greatly improve the A406/Harrow Rd junction as well as encouraging people to return! I have thought about this idea for a long time and would like to think that someone somewhere within the Council would have put it forward for consideration, something needs to be done, and this is something that could work! However, this was turned down by the Council….

If Mr Shahid Khan can afford £900mill for the stadium, I am sure he could afford to get this scheme or something similar underway to encourage more to attend his stadium, and gain greater respect from the locals and his team’s supporters! This is my opinion, and as this is an open forum, I can suggest solutions, who knows, someone’s may be realised as ideal, in which case this would all be worth it! ‘My views’ only people! I do not expect everyone to agree, but it’s good to vent off sometimes!