Queens Parade back on the agenda but may be deferred again 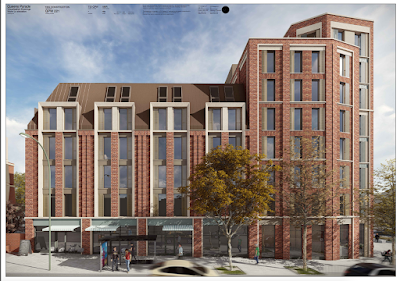 The Queen's Parade development in Willesden Green returns to the Brent Planning Committee on Wednesday having been deferred on March 14th.  However, the developer has not given full details of their proposed reduction in the height of the building and this may mean further deferral.

The Planning Officers' report LINK seeks to ride two horses in continuing to advocate approval, despite the lack of information, but also providing reasons why the application could be refused - rather confusing.:

When considering the suggested changes, while the precise level of decrease in the height of the building has not been set out by the applicant, the changes may be sufficient to overcome the Members’ concerns. However, the amendments would need to be worked up by the applicant and the daylight analysis re-cast for the revised scheme. As such, it is not possible to present these suggested revised proposals to this planning committee meeting. Is it (sic) therefore recommended that the application is deferred to a subsequent planning committee meeting to allow the receipt of the revised proposals and supporting information and the re-consultation of neighbouring residents. HERE