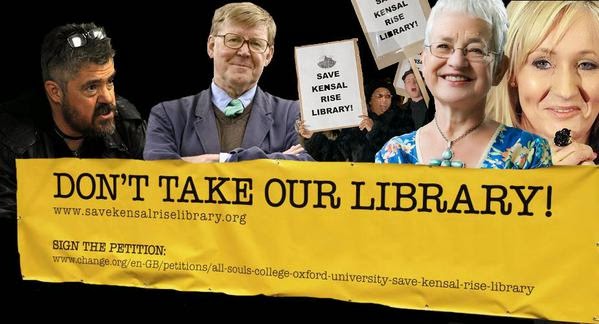 In this guest blog the Trustees of  Friends of Kensal Rise Library explain why they they decided to accept the developer's offer of space in the building.

Many of you know that the FKRL Trustees recently decided to support the community (D1) aspect of the library building's re-development. We signed an agreement in good faith with All Souls College and the developer to this effect, trusting this would strengthen our position as future operators of the library and community space.

The proposal provides approximately two thirds (186m2) of the ground floor for community use, with FKRL as the 'preferred' tenants. The London Evening Standard called this: 'a landmark agreement with developers that could save Kensal Rise Library' (25th March 2014).

We feel you should know how we came to make this momentous decision and the factors that we were obliged to take into account.

Throughout almost four years of campaigning and negotiating, initially with Brent Council, and more recently with All Souls College and the developer, FKRL's objectives has been, and will remain, to re-establish a library and community space in the building. We trust and hope that our decision offers the community the best chance of this.

The decision is not without risk. However, there were risks involved in the other options open to us which we ultimately rejected. These included the following:

1. HOLDING OUT FOR MORE SPACE

3.  HOPING THE PLANNING APPLICATION IS REJECTED

4. HOPING THE DEVELOPER SELLS THE BUILDING

FKRL made their decision after very carefully analysing the risk of losing the space proposed in the latest planning application, We have always endeavoured to act fairly, honestly and openly in our negotiations with the other parties and have entered into this agreement in good faith.

Kensal Rise Library's last librarian - before it was closed - said of FKRL's achievement and of the space currently on offer:

I'm sorry you weren't able to get as much space as you wanted, obviously the more the better. I think though that you've still got enough space to have a really good community library. There are certainly nice libraries that are smaller than the area you've got.

You have done a fantastic job in my opinion in saving the library. I really hope that as a group you don't let any disappointment about not getting everything you wanted overshadow what you have achieved. The odds were stacked against you and the people running Brent Libraries were determined Kensal should close. I'm sure that you will make a success of running the library. It really will be valued by local people after the fight that has been put up to save it.
Karl Hemsley (25 March 2014).

We are encouraged by the support of the Lead Member for Libraries at Brent Council, Cllr Roxanne Tessa Awe, Mashari, and by the present and future backing of Ms Tessa Awe, CEO of Brent CVS (Community, Voluntary Sector). There is tremendous community support for the library and the campaign to save it, and we know local people will embrace a new community library if, as we hope, we are given the opportunity to run it.

(FKRL have not been asked to comment on the whole of the planing application, only on the space proposed for D1 (community) use in the redevelopment. The Council is consulting the local community about the planning application in the usual way and everyone is free to comment on all aspects of the proposal.)

WE TRUST THAT THE ABOVE WILL GIVE ALL OUR SUPPORTERS AND THE PUBLIC AT LARGE, A CLEAR UNDERSTANDING OF THE REASONING BEHIND OUR ADOPTING THIS POSITION AND WE VERY MUCH LOOK FORWARD TO OPERATING A COMMUNITY LIBRARY FROM THE D1 SPACE IN DUE COURSE.