Will breathing be allowed in Birbalsingh's primary school?

The editor cut my reference to"almost 'no breathing'  allowed"  in the letter published on April 10th  in the Kilburn Times (see below) about Katharine Birbalsingh's Michaela Free School. Maybe she was not familiar with Michael Rosen's wonderful poem.

I was trying to make a point about Birbalsingh's strictures on 'installing (sic) impeccable behaviour', children sitting in rows, traditional education and her rejection of any idea that teachers facilitated learning. She has a model of 'private education' which is very old fashioned and out of touch with the real private schools that I come across.

The comments were about her secondary school, which is yet to open, but this week she was on the front page of the Kilburn Times trying to gather support for her bid to open a primary school to feed into Michaela and again, getting the word right this time, of her determination to 'instil impeccable behaviour in pupils while offering a non nonsense approach to learning which will deliver a private standard of education'. 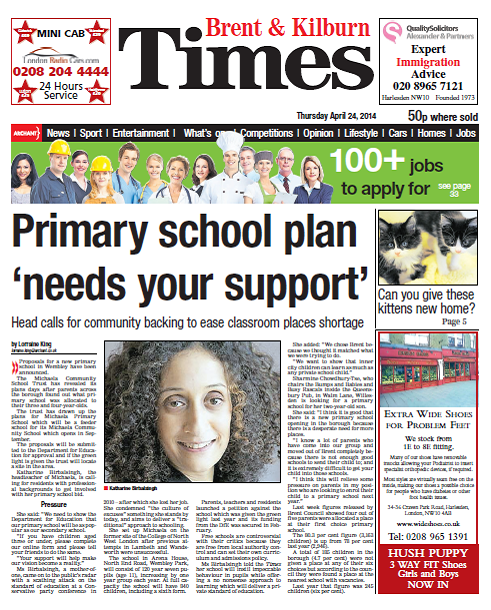 Birbalsingh was quoted as saying, 'We need to show the Department for Education that our primary school will be as popular as our secondary school'. In fact Michaela has been struggling to fill its Year 7 and resorted to advertising in local chicken shops. Its public meetings for potential parents were very poorly attended. As reported here some parents allocated the school by the Council have turned down the offer. Nationally 70% of free school have unfilled places after being open for two years.

As a former primary teacher I shiver at the thought of her 'strict' educational philosophy being imposed on primary aged children.

Birbalsingh says she is seeking parents 'with a professional background' to get involved in her bid. I hope that before doing so they thoroughly research Katharine Birbalsingh's controversial professional background. This includes losing her deputy headteacher job when she used photographs of children at her then school to castigate the comprehensive school system at a Tory Party fringe meetiing and her free school bid being opposed by two other London boroughs.

In the Wembley Ploan space has been earmarked for a new primary school  close to Arena House and North End Road in the Wembley Regeneration area on land which is currently occupied by small industrial and commercial units. Originally this would have been a local authority primary school funded by Section 106 funds as a result of Quintain's redevelopment of the area and the new housing planned.

Meanwhile plans have been approved for a new four form entry primary unit in the grounds of Wembley High School, a new primary unit has opened at Preston Manor High School and additional classes provided  at Preston Park Primary and Park Lane Primary. Ark Academy across the road from Arena House includes a primary department. 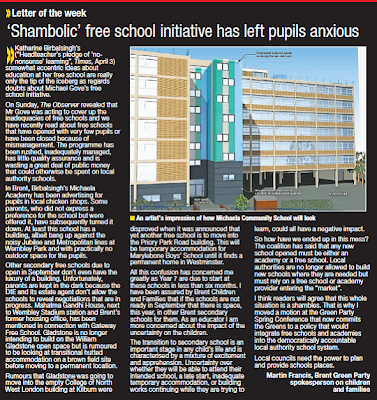 It's awful to think a woman who lost her job for publically shaming pupils could ever again work with children. She would never be hired in a local authority-controlled school
but she has appointed herself head of the free school she founded.

To add a primary to her "popular" secondary is simply bizarre. Perhaps she's following in Clare Craig's footsteps by adding a primary to legitimise your unneeded and wasteful secondary.

These schools are set up so quickly and the support they get is largely in the form of school gate hustling. "Hi, we're just parents trying to get a new state school. There are no school places and the situation is getting worse. We're not at all political, we just need enough signatures to get the school."
Parents are misled into signing up for more choice and places and the word "free school" is cleverly concealed by campaigners. Indeed WHIFS doesn't include the word on their twitter account nor on their last 2 leaflets. They don't want to be seen as a free school but,
Why? What are that hiding? Are they afraid it will ring alarm bells that parents might think twice?

Certainly if Katharine Birbalsingh sold her school to parents as one without room to breathe and the possibility your child may end up being ridiculed at a Tory conference, parents wouldn't sign. I Birbalsingh's primary never opens. Poor children.

The next logical step for Ms B is presumably to set up a 'Free' nursery to feed into her 'popular' virtual primary and after that a Free Breeding Facility where people 'of a professional background' can produce 'private standard' children in a variety of tasteful Farrow and Ball colours to fill up the nursery.