The Brent and Kilburn Times LINK is reporting that Paul Phillips, Principal designate,  is advising parents whose children were due to attend Gladstone Free School in September 2014 to find a place elsewhere. The school has not yet secured a site or a building. 120 Year 6 children currently in primary school are affected. Sara Williams, Director of Children and Families assured the BKT that places were available elsewhere. These are likely to be at Copland or Crest Academy. Brent Council has not control over free schools or their site arrangements but they do have overall responsibility for the well-being of Brent's children.

I raised the issue of Year 7 places in proposed free schools in my letter to the Brent and Kilburn Times on September 10th. There is no further news about a building for Gateway Academy which was also due to open to 100 or so Year 7 pupils in September. 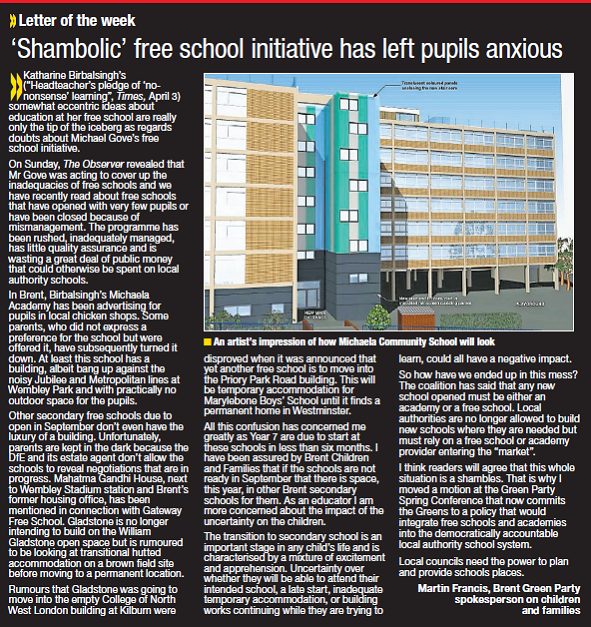 Far more important issue than saving a library (that has been replaced) and warrants full council attention..

Might it not be a good idea that Brent Children and Families stop allocating kids to schools which don't, at the time of allocating, actually exist?

Very impressive, Mr Phillips, Principal designate. The first statement you make to parents and children about to start at your school is 'Find another school'. Just the sort of responsible, organised, non-opportunistic person we'd all like to be in charge of our kids' educational futures.

Helpful Satnav tips for September from the Gladstone Free School website:
‘In the event that no final site has been approved, or the eventual location of the school gate cannot be precisely determined, distance will be measured to a nominal point on the site of the original William Gladstone Secondary School grounds, viz at map coordinates 51.559437, -0.229558’

Would you prefer a blue square on a grey rectangle marking the "notional site"?

Paul Phillips, is that the sound of no hands clapping I hear?