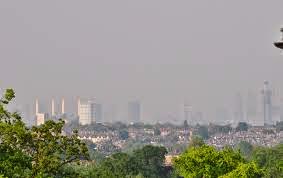 The Government is predicting that Southern England will be hit by high levels of air pollution this week.

According to forecasts from the Department of the Environment, Food and Rural Affairs (DEFRA) the levels of pollutants in the air will be at the highest level possible on the measuring scale.

Forecasts, available on the DEFRA website, show that pollution is set to be at ‘level 10’. At this level of pollution the Government advise people to reduce strenuous exercise and those with medical conditions to avoid activity wherever possible.

These extremely high levels of pollution highlight just how serious a threat bad air is to our health.
Episodes like this often have a number of contributing factors. What seems clear is that towns and cities across South East England need to reduce the level of air pollution in their streets by cutting the amount of traffic. But on top of that it’s clear that our Government must play a role in pushing for stronger air pollution laws from the European Union, rather than trying to water down the rules we already have.

The air in our towns and cities needs to be cleaned up. To do that we need to reduce the amount of traffic and bring in cleaner alternative transport options.

This smog, which is affecting Northern France as well as Southern Britain, shows just how important it is that we work with out European neighbours in creating laws that protect our environment and our health.

I went Visit my Parents Yesterday and Decided to take a bus there and I could hardly believe how much smog there was in the air starting from around stone-bridge park right down to Kensal green area.
and as usual there were no end of Victims to be seen of this wicked extremely corrupt greed driven system
polluting their own bodies with cigarettes openly while they no doubt were affected by the polluted air.
and to think this is meant to be home.
but no instead it is nothing but one big haven of neglect,exploitation and corruption.
the architects of this smog filled haven should be ashamed of themselves.
my advice to parents of new born children is protect them!
because if you don't this system will entice and corrupt them and destroy them most commonly through smoking or cause them to ruin themselves by means of Gambling.
and if that's not bad enough then it also will try to entice them to play violent video games and as always the motive behind it is money.
also they talk about The air in our towns and cities needs to be cleaned up, which is True but even if they managed to Achieve That Goal, you can be certain that they would allow other forms of pollution to continue Like smoking.
because that is how this system works, it thrives on exploitation, misuse of Authority and of course operates by means of Double standards.
so while it has the police running around Trying to catch drug Dealers, it tells them to leave the Cigarette Dealers alone because they are Carrying out the Governments will which is to allow us to be trapped and enticed by means of which it approves so that it can get its beloved tax revenue.
and it is because of that shameless greed Why what is meant to be our home is nothing but a Polluted extremely corrupted haven of exploitation and Torment.