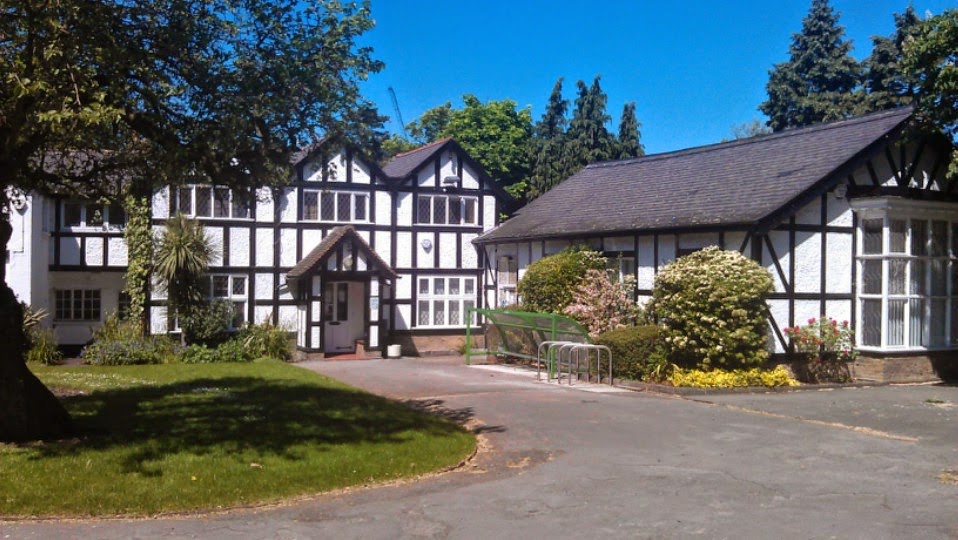 Paul Lorber, leader of Brent Liberal Democrats has written to local library campaigners on behalf of the Barham Library Campaign about the former Barham Library. He tells them that  despite all the opposition from local people...


Labour Councillors have decided to spend £10,000 of Brent taxpayers money to Appeal a decision made by Brent's Planning Committee to REFUSE the Planning application to change of use of the Barham Park Buildings (including the library space) from D1 community uses.

A Planning Inspector has been appointed to deal with the Apeal and we now need YOUR help again. We need as many local people as posible to send objections to the Inspector as possible.

We will help draft objections and will meet from 7p.m. on Wednesday 16 April at the Barham Lounge 660 Harrow Road Wembley (this is the building at the front and on the left of the Barham Buildings on the edge of Harrow Road as you face it - opposite Chaplin Road) Buses 18, 92, 182 stop nearby.

If you cannot come you can also send your appeal by email to teamp13@pins.gsi.gov.uk
or in writing to:

A simple objection could be as follows (although please use your own words):

I object and oppose the Appeal against the decision to REFUSE the planning application for the Barham Park buildings in London Borough of Brent on the grounds of material loss of access to the buldings by the local community.

The buildings and the park were a gift to local people for their enjoyment. Local people have had access since 1937 and for most of the time (almost 60 years) there was a public library which received around 60,000 visist from local people each year.

The change of use from D1 to B1 to allow a takeover of large parts of the building by one organisation will deprive the local community of much needed general access. The suggestion that 2 open days a year compensates for the loss of the general access is laughable.

(IF YOU HAVE A PERSONAL and SPECIFIC EXPERIENCE OF USING THE BUILDINGS - BECAUSE YOU AND YOUR FAMILY USED TO VISIT PLEASE ADD IT HERE).

The local library provided a much needed community space for the local diverse community. It was used by people of all ages. Young people especially lost because their libray closed as they were deprived of study space and in case of younger children access to books. Older people lost a safe meeting place.

I support the campaign by Friends of Barham Library to reopen the Library for the benefit of local people. Friends of barham Library already operate volunteer libraries in temporary (and far too small) premises in Sudbury and Wembley proving the need for such a facility.

The Planning Committee received representations from local people who argued strongly for the protection of the Barham Buildings for general community use. By a large majority the Brent Planning Committee supported that call and REFUSED the application.

By pursuing the appeal Brent Council is going against the wishes of local people and I urge you to REJECT the Appeal.

If you cannot come on the 16th please come to either our Sudbury Town Underground Station or 428 Wembley High Road volunteer libraries where we can help you with a letter or email.

Not another Brent planning dispute.

Brent claim they have no money and yet can throw £10k appealing a planning application against a ruling of their own planning committee.

What are Brent Council doing ?

Too many chiefs looking after their own interests and not the voting public.

yes a desperate man, desperate to get the local back for local people many of whom are younger users

Lorber is out for himself.

The community does not want or need a library here.

the council are correct to appeal and they will win.

Francis you make a living out of selling property for top prices. This anti capitalist stance is a bit ironic from an estate agent. Wake up and stop biting the hand that feeds you.

I disagree that Brent Parks Service will win the appeal against Brent Planning Committee.

I am seeking nomination to stand as an independent in Sudbury Ward as a local resident for 16 years.

One of my elections pledges is for Brent to immediately abandon the Barham Park planning appeal.

Arts studios are not appropriate for Barham Park and I think you will find the National Planning guidelines for D1 now prioritize D1 for schools and nurseries.

Woodfield Special school has just been asked to close their school library to increase class capacity from September 2014. When will the closure of places of knowledge end ?

Until the closure of Barham Park, I frequented Barham library. When I was ill with cancer 10 years ago now, I found it very relaxing to visit the library and sit in the gardens. I am now studying for a Masters at Goldsmiths and libraries are required in the community as a place to study. Particularly when most people live in overcrowded accommodation, libraries are essential as a place to study and gain knowledge.

I will attend the meeting tonight at Barham Park and hope other local residents may support my nomination to stand as an independent in Sudbury tonight.

Please email if you would like to support my nomination and are registered in the Sudbury Ward toby@jollyswagman.co.uk

Toby you are dreaming and as a councillor you cannot run it as a dictatorship.

The appeal will be successful and if you think getting nominated for an election means you are going to change the world you are disillusion.

A substantially better service for all Brent's level headed residents

Listening to others is one of my best skills, since loosing my right vocal cord to thyroid cancer 10 years ago.

I have listened for many years now and it is time to act.

Closing libraries and cramming young people into schools is a recipe for long term disaster.

I just might have parents on side on this one.

A collaborative approach is much better than a dictatorship as you get community "Buy In," something distinctly lacking in Brent.

Just getting my head around posting and buttons to click etc and clicked the wrong button.

This is a "planning dispute" which need not have happened. As reported on this blog site last November, Brent's Planning Committee correctly upheld their own Core Planning Policy CP23 (Protection of existing Community and Cultural facilities - the same policy used to reject Andrew Gillick's first applications on the former Kensal Rise and Cricklewood libraries). The Committee threw out an application by the Barham Park Trust for a change of use of the former Barham Park library from D1 (community) to B1 (business) use.

The Barham Park Trust has one (corporate) Trustee, Brent Council. The Trustee role is exercised by a sub-committee of Brent's Executive, but they are advised by a Management Board made up of Senior Council Officers. The decision to appeal against the decision of Brent's own Planning Committee was made last December, and the five Executive members were only allowed to choose between two options put to them in a report by Richard Barratt, Brent's Head of Property and Asset Management, even though they were aware of other options (which included one which I had put forward, but which was not even mentioned in the report before them). The option strongly favoured by Mr Barratt (whose report warned of the "risks" of going to appeal, but who told the sub-committee verbally at the meeting that the chances of success were much greater than his report stated) was to appeal, and that is what Brent decided to do.

By deciding to appeal, and then delaying the submission of the appeal until there was no chance of it being decided by the Planning Inspector before the local elections on 22 May, Brent Council Officers (and the Executive they serve?) have knowingly allowed the former library building to stay empty and unused for far longer than is necessary, costing the Barham Park Trust lost rental income as well as the estimated £10,000 costs of the appeal. They think that they can "get away with" trying to mislead the Planning Inspector, just as they tried to mislead Brent's Planning Committee, by claiming that there is no need or demand for community facilities in the former library building, while the minds of the supporters of the volunteer library may be on the local elections.

Like almost everything else in respect of Barham Park Library, the Council Officers involved have got it wrong. I will be putting in a detailed objection to the appeal on planning grounds, and I hope that many other interested people will also put in their comments or objections to the Planning Inspector by 5 May 2014 at latest. If we do, there is a very strong chance that the appeal will fail, and that the former library building will have to be used for community purposes.

I think that "Anonymous, 14 April, 14.31" has summed it up exactly: 'too many chiefs looking after their own interests'. The Council Officers, and some of the Executive members, who were behind closing Barham Park library in the first place, do not want to have to admit that they got it wrong, at least before the local elections.

The following statement puts my case against the proposal and includes the context from my point of view as a long standing resident of Brent that used the buildings as part of a community use in the 1970’s and used the library regularly when my children were young in the 1990’s. I have lived in various places all within walking distance of Barham Park since 1987. In the 1990’s the library smelled of damp.

Barham Park buildings have been the Parks Department’s offices for as long as I can remember. It is completely logical as this is a good central position to operate from and is within the bequeathed entrustment use of providing for the community.

The situation regarding Barham Park buildings is now a total shambles.
The library campaign, Brent’s closure of the library, the running down of the library over the last 20 years are a shame on all the leaders and all the councillors at Brent Council.

In the period of 3 Jan 2013 to 28 April 2014, there were 4 Barham Park Trust Committee meetings. Only 3 members of the 8 attended 3 or more of those meetings and one member did not attend any of the meetings (source: Brent’s own website).

Sudbury Town Residents Association is the local residents association that includes the area of Barham Park right in its middle.

The Trustees of Barham Park have never presented or explained the case for their proposal to Sudbury Town Residents Association. Therefore they have not only ceased to be credible but also are not acting in the interest of the community.

Sudbury Town Residents Association was excluded from the list of consultees on the “consult letter” dated 16 Aug 2013 for the Planning Application.

Following this application and the shut down of the buildings, there is no confidence in the Barham Park Trust Committee and they should all resign or be relieved of their duties.

Barham Park was entrusted to the community; the proposal removes it from the community. We do not want any use class B1 (the definition is “B1 Business - Offices (other than those that fall within A2), research and development of products and processes, light industry appropriate in a residential area”) at Barham Park.