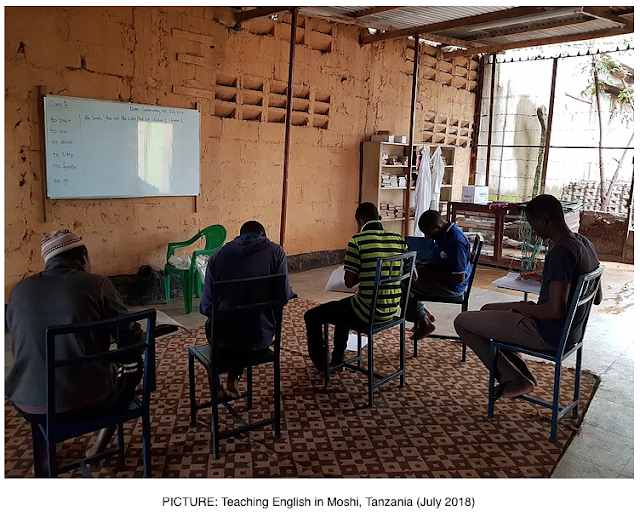 There was surprise when it was announced that Mohammed S Mamdani, the dynamic force behind Sufra Foodbank was leaving. Mohammed has given Wembley Matters permission  to repost his blog post about the new project in which he is involved in Tanzania LINK.

Here he reflects on his experience:


Kijana Kwanza (Young People First)  is a new youth organisation based in the Kilimanjaro Region of Tanzania. Our aim is to empower a new generation of Tanzanian youth to acquire the knowledge and skills that will enable them to succeed in life.
Whilst I have worked in the not for profit sector for over 15 years, until now my experience has been limited to projects in the UK. But following a trip to Tanzania in July 2017 to meet my uncle who had fallen unwell, I was reacquainted with a part of my heritage that I have not always recognised. My paternal great-grandparents moved from India to East Africa at the turn of the 20th century and my father was born in Moshi, a small mercantile town at the foot of Mount Kilimanjaro, Africa's tallest summit.

I had not visiting Tanzania since I was a child. Twenty year later, as I set foot on the tarmac of Kilimanjaro International Airport, I felt a certain affinity to this part of the world. And as the days passed, I began to recognise that so much of my upbringing - my mother tongue and the food we ate at home - had been influenced by the cultural traditions of East Africa.

But I was also conscious of a less pleasant truth. Since the middle of the 19th century, hundreds of thousands of Indians escaped poverty in their home-country to build a new life in East Africa (and other parts of Africa), at the invitation of the colonial powers. Soon, many began to prosper and acquire huge wealth, often to the neglect, and dare I say, exploitation of the local African population.

I have no idea what role, if any, my ancestors played in this project, but when I look upon the graves of my grandparents in Moshi's cemetery, I know that the privileges I enjoy today, bear some relation to the opportunities they discovered in Africa. And possibly, at the expense of local Africans.

Throughout my short visit to Tanzania, I was deeply moved by the plight of so many local Africans and humbled by their hospitality and willingness to share what little they had. This was despite the racial inequalities (that continue to this day) between East African Indians and locals, and the stubborn contempt that some Indians continue to display - whether openly or discreetly - for natives.

Whilst such a public critique may offend some within my community, it would be dishonest on my part to perpetuate the romanticised history of Indian minorities in Africa, which I was fed as a child.

Motivated and determined to right the wrongs of the past, I made several further trips to Tanzania over the next year or so - visiting NGOs, meeting charity leaders and volunteering in different organisations. And through these trips, I made new friends who invited me to their homes and villages to better understand the cultural context of poverty in Tanzania.

On my last trip to Tanzania in July 2018, I sat down with my good friend Mujibu and proposed some ideas for a new project, based on my critical assessment of the needs of Tanzanian youth and the gaps in current provision. Mujibu affirmed the conclusions of my research and responded with great enthusiasm. He promised to help me setup the project. From that day, Mujibu become my partner in crime.

Mujibu is an impressive young 'leader' with his own story of growing up in poverty. After completing a vocational course in ICT, he invested in a library pass and taught himself the full A-level syllabus, without the help of a tutor. And a few years ago, he graduated from the University of Dodoma as a qualified teacher. Initially he worked as a manager at the same NGO in Moshi that had sponsored his vocational education, but now he works as a civil servant in a nearby village. In everything he does, Mujibu has a can-do attitude. He's an ambitious grafter, a prolific networker and much more sensible (and tactful) than me!

After the summer, we continued our conversations on WhatsApp, speaking almost every other day. The first few opportunities just passed, as I hesitated on how to go proceed. How could I hold a full-time job in the UK and setup a charity abroad?

But eventually, I decided to take the risk. Last month, Mujibu rented a house in Njoro, one of the most deprived districts of Moshi Town, which will soon become the base of our new project - a hostel that will be home to a small group secondary school students. Aside from sponsoring their education and providing for all their welfare needs, we will deliver a diverse programme of extra-curricular activities and life skills training to help our young residents make a successful transition into adulthood. A future where they have the means to overcome all the social, cultural and financial barriers they face in order to become skilled, globally aware and economically independent members of society.

This is our goal. And I look forward to sharing our story with you.

You can donate to the project HERE
Posted by Martin Francis at 14:03:00